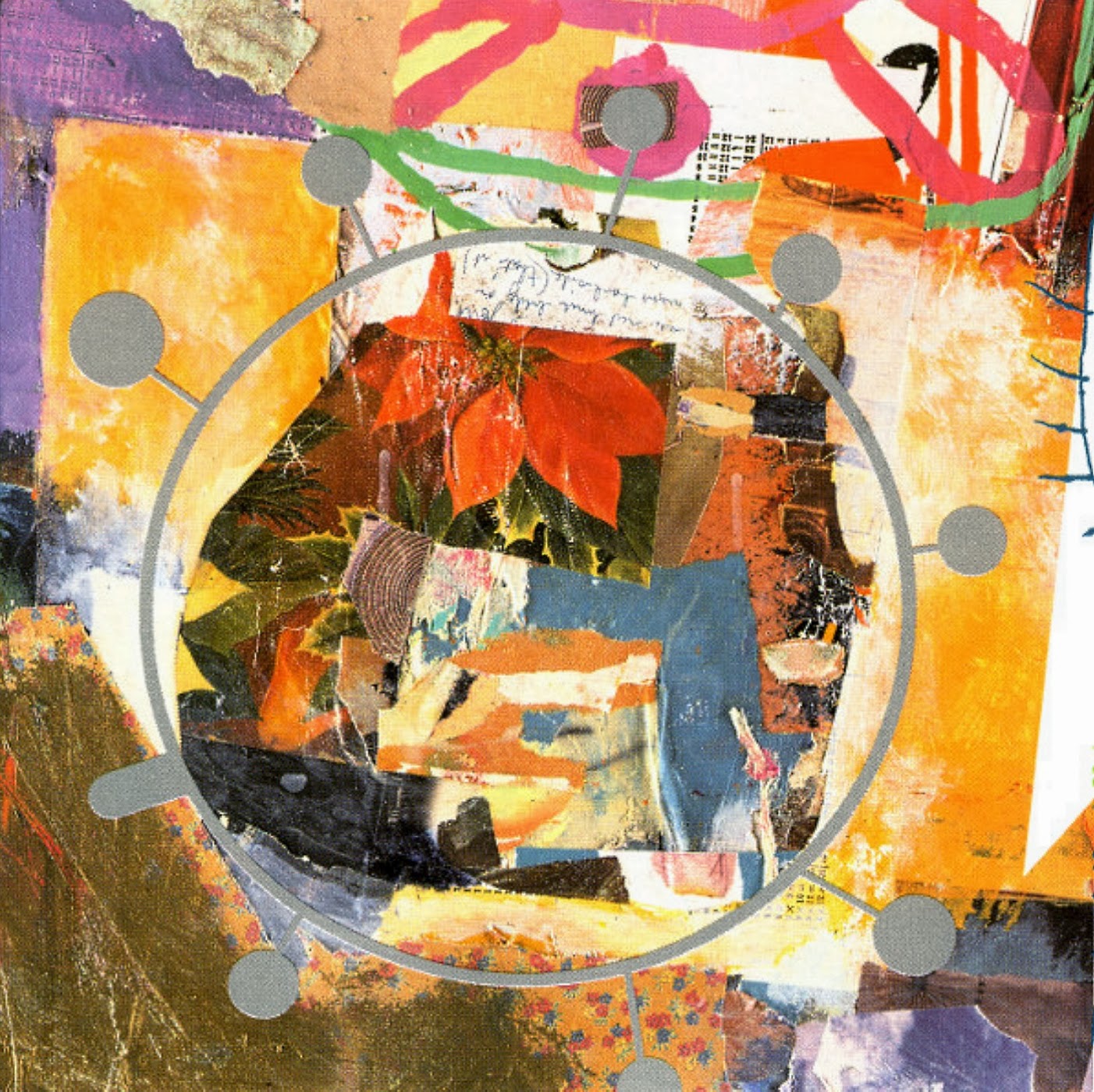 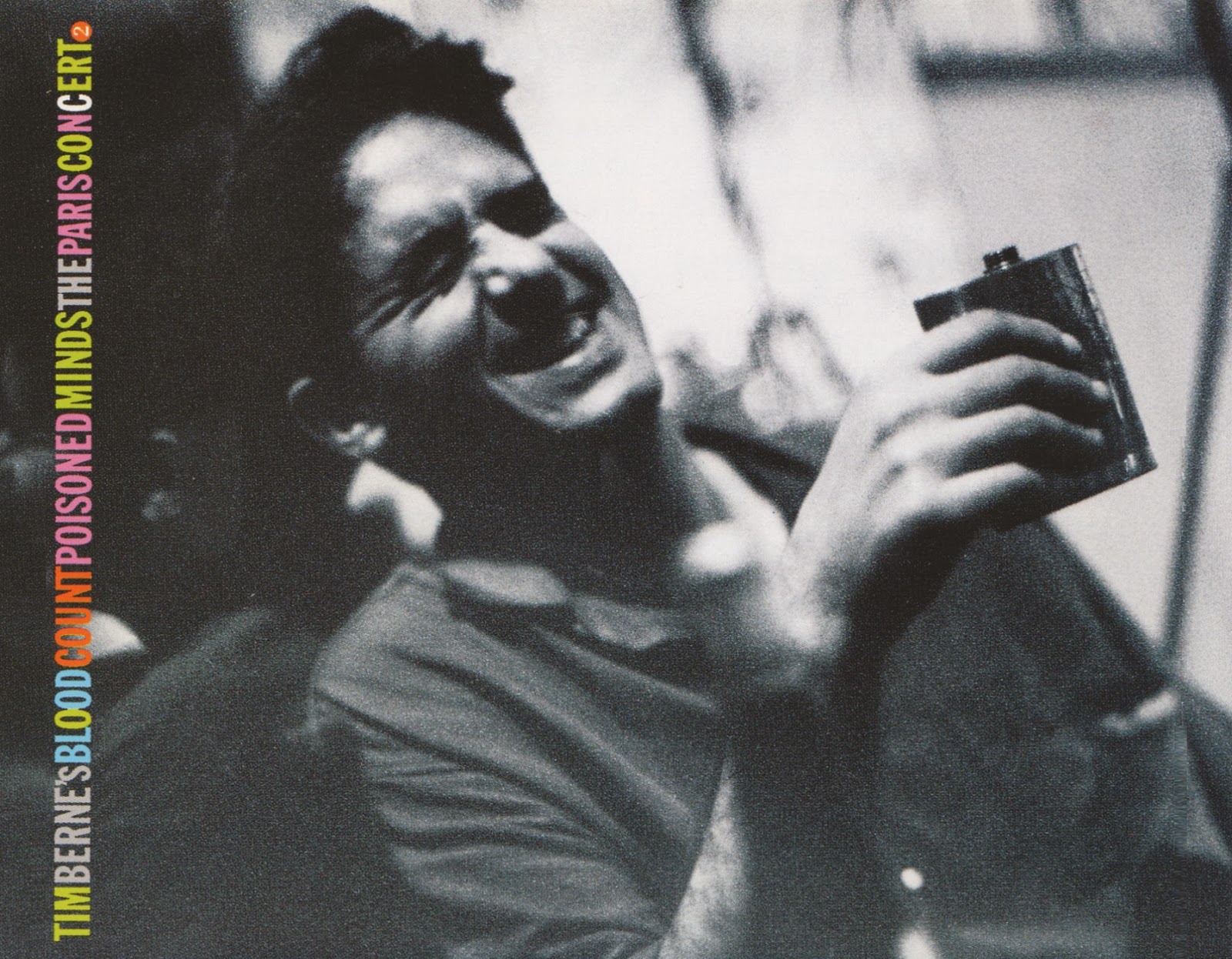 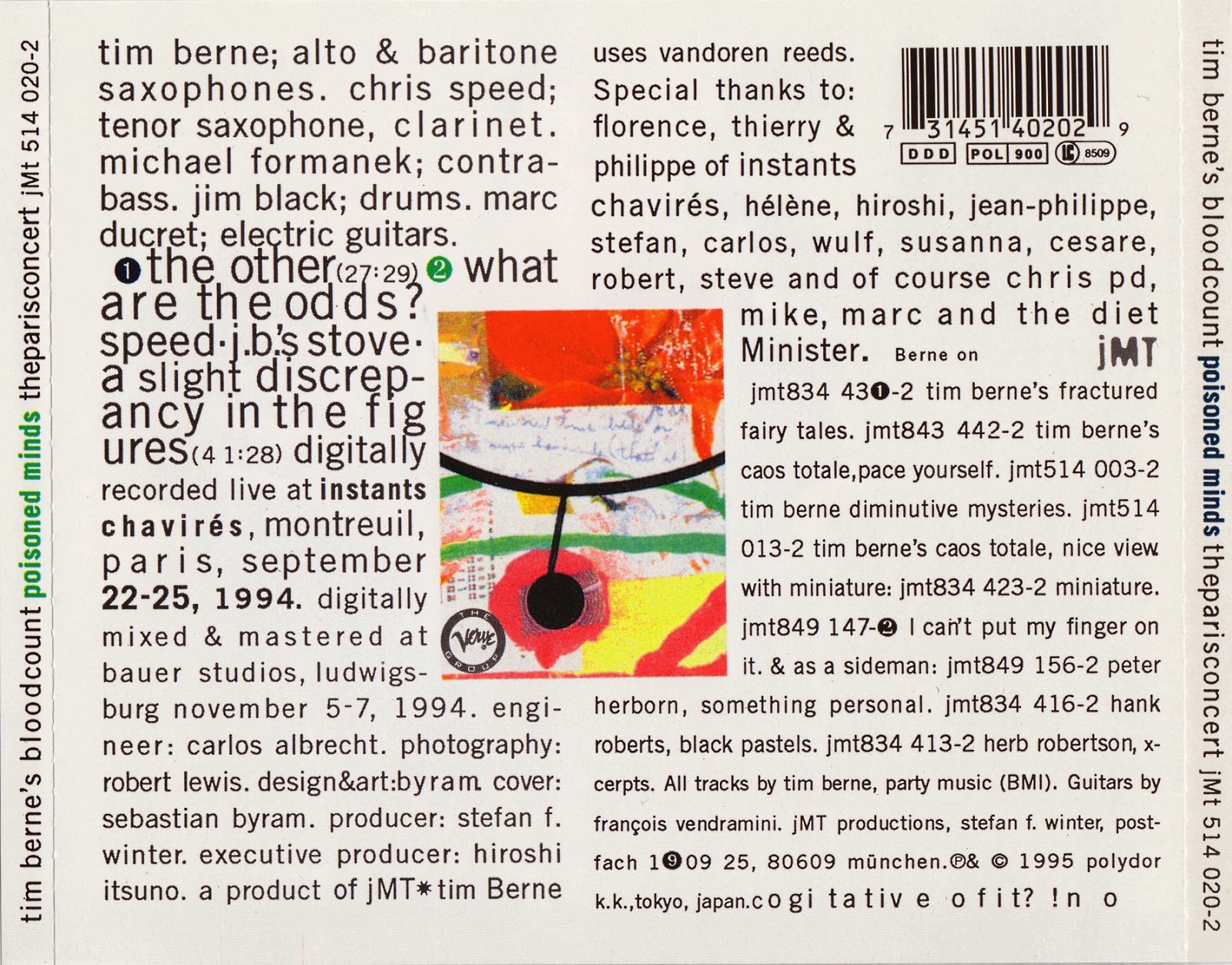 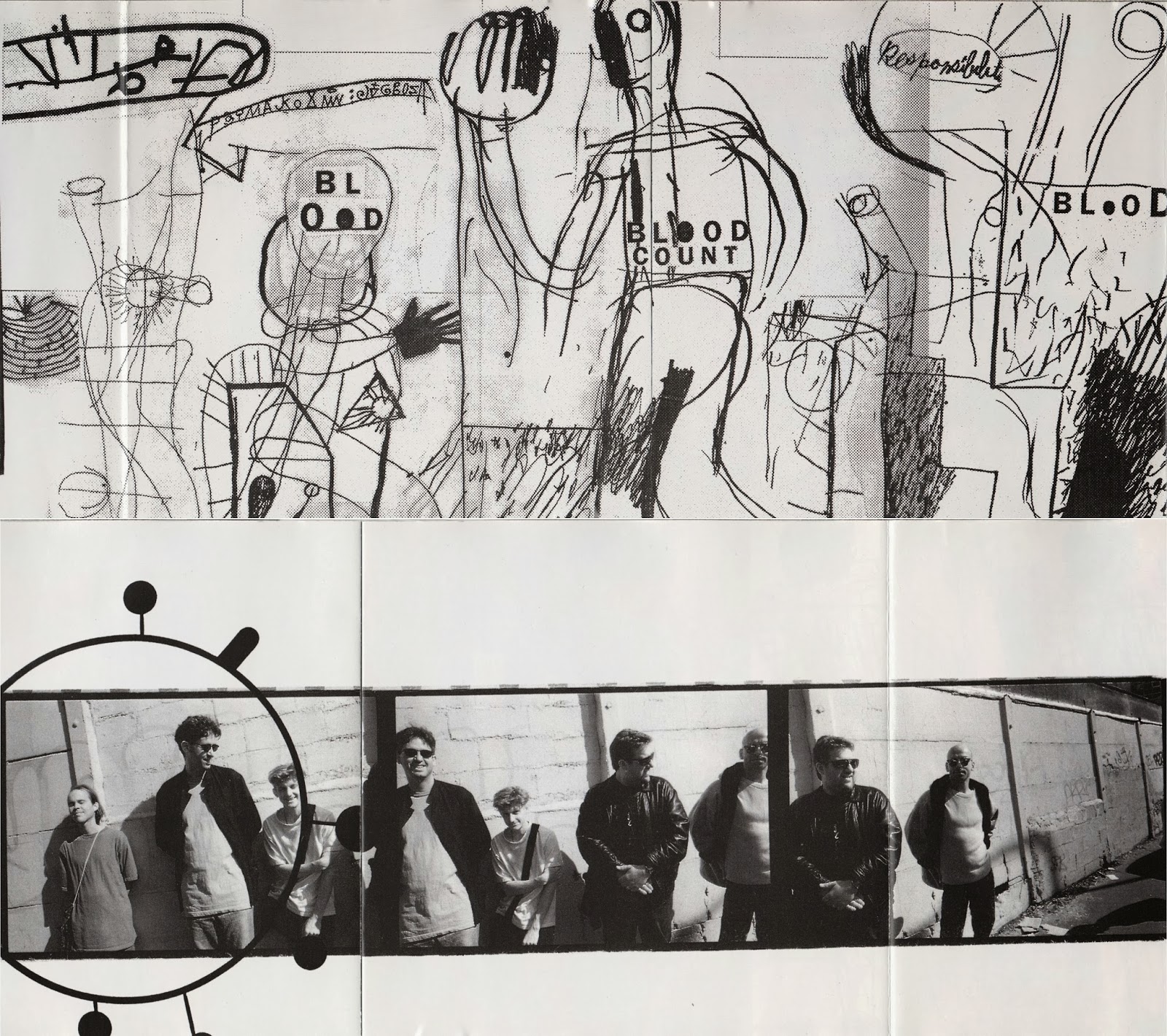 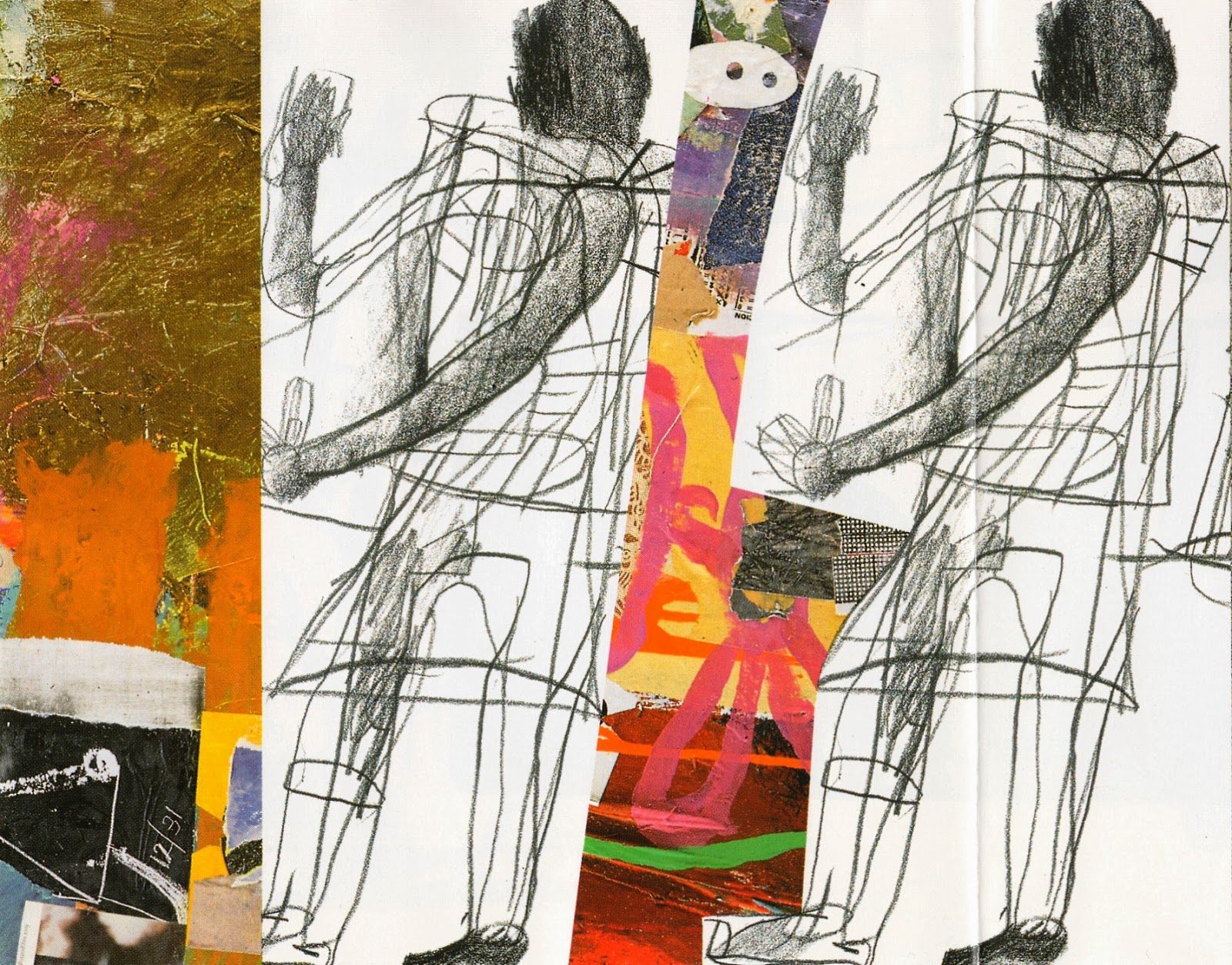 Tim Berne continued Bloodcount's forays into extended-form creative jazz with Poisoned Minds, the second installment of the band's live CD series recorded at Instants Chavirés in Paris during September of 1994. There are only two pieces on the disc, "The Other" at 27 and a half minutes and "What Are the Odds?" at 41 and a half minutes; with running times like those, Berne was clearly not aiming for significant airplay on commercial radio. Instead, Poisoned Minds is for serious listeners without attenuated attention spans, a somewhat radical concept in itself. Yet aside from the lengths of the pieces, many elements of the music are not particularly radical despite Berne's avant-garde rep -- melody, rhythm, and theme are all important to the saxophonist, and the innovation comes from the way he manipulates structure, fitting the pieces of the puzzle together in unpredictable ways. "The Other" begins with Berne on alto and Chris Speed on clarinet, stating a bluesy, soulful, and somewhat melancholy theme in rubato time; drummer Jim Black uses this opportunity to color the music with textural embellishments rather than drive it forward. Urgent propulsion is dominant in the piece's middle section, where tension is stretched to the breaking point as Black and bassist Michael Formanek jam out with a twisted rhythm and Berne and Speed, scarcely taking time to inhale, throw long purple-faced lines over the top. And yet "The Other" perhaps finds its greatest power in an uneasy conclusion that combines elements of free jazz and chamber music, subverting any expectations of a slam-bang finale. Berne starts "What Are the Odds?" on alto accompanied only by Black, and he's not in the mood for rumination at this point, possessed instead by uptempo, boppish energy. As his sax lines leap and twist, bits of a Berne-ish melody become discernible, and suddenly the whole band is off to the races together on a highly charged theme that catapults forward even through abrupt, oddly timed stops and starts. Then Speed bursts through with a hot tenor solo over churning, chunky, and propulsive accompaniment from Black, Formanek, and guitarist Marc Ducret. The groove pulls completely apart in a cacophonous outburst from all the bandmembers, but Berne and Speed somehow find their way back to the theme and then drag the rhythm section back in line with them. An abrupt downward shift in dynamics leads to a beautifully subdued ensemble passage, and then Formanek is soon displaying his solo chops. From here on, unpredictability comes not in the piece's linear form -- which is in fact leading to a slam-bang finish -- but rather in the way Berne uses intra-band tension. In three separate waves, solo or group episodes informed by free improvisation are pitted against steadily rising backdrops of funky, twisted riffs that only Berne could write. Rhythmically off-kilter and yet with grooves that Black can drive a truck through, Berne's engaging riffs ultimately win the struggle, with so much energy expended that the listener is left -- happily -- exhausted.