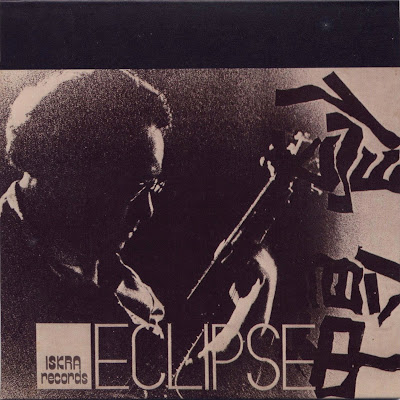 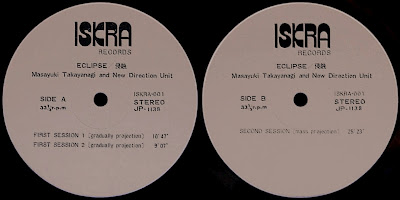 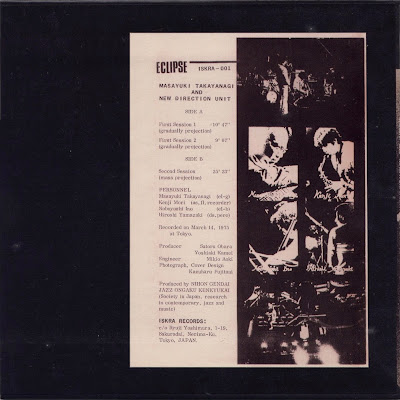 One of the rarest of Takayanagi's LPs, originally released on Iskra Records in a limited edition of only 100 copies.
Thanks to the kindness of my Irish friend Mr. DILLON who sent me LP and all the material I needed for this post, you have the opportunity to hear what this rare vinyl pearl sounds like.

The 2006 CD reissue, that I have (PSF Records - PSFD-8025), I only now notice after listening to the LP, it produces sharper sound and has a certain acceleration in rpm relative to the original, which contributes to the shortening of the compositions, but on the other hand it enhances the dynamics. Of course, that they didn't write it anywhere, but any ear can notice that difference if given the opportunity of comparison.

Apart from my usual art presentation of the album, I did almost nothing on the soundtrack: cleaned the tape from clicks, minimized noise,  implemented normalized to -0.1 dB and made the usual compression.
The Japanese have done it masterfully, the LP is so well recorded that you can hardly believe it's 1975. Sounds perfect! It sounds better than a CD that has a slightly raw, more aggressive sound to the ears.

Note:
A small change was deliberately made on the front cover of the album which has no effect on the quality of the original design. In this way, I protect my work. 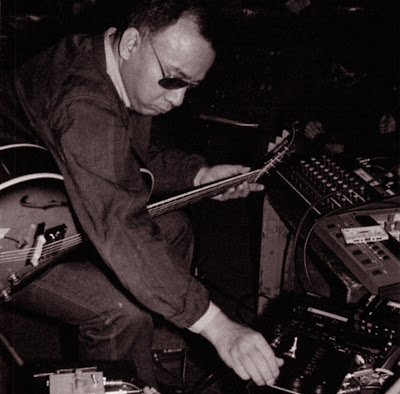 Review:
Masayuki Takayanagi - Eclipse (Japanese title: Shinshoku) has always been the rarest of Masayuki Takayanagi's records. The album was recorded in May 1975 by his New Directions group just three weeks after the monumental "April is the Cruellest Month" set. Legendary free jazz label ESP Disk was due to release "April..."., so, expecting heavy demand for the overseas ablum, Iskra cut the pressing size for Eclipse from 300 to just 100. In the end, ESP went belly up, and "April is the Cruellest Month", had to wait until the nineties for a CD release. Eclipse became a holy grail for Japanese collectors with copies changing hands for up to $3000, and since the master-tapes had mysteriously vanished it seemed supremely unlikelyto ever be reissued. However, by some sort of miracle, the original masters were unearthed 2005, and ordinary human beings can at last revel in the tense, explosivedynamics of the classic recording. Fantastic free jazz of varying intensities, led by Takayanagi's searing yet supple guitar. His supporting ensemble is more than just sidemen, they skillfully create enigmatic new worlds through twisted manipulation of forms and sounds. 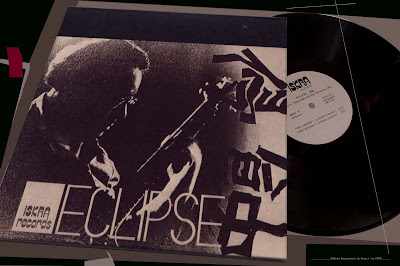 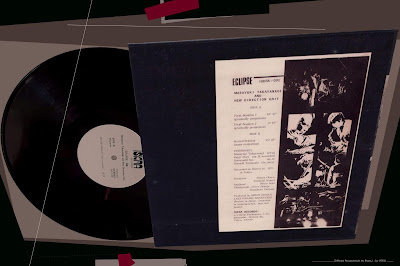 The first song, a wandering yet lingering "First Session I (Gradually Projection)" sketch, is displaced by the (subtle?) forward thrust and scrambling parry of the second. Indeed, "First Session II (Gradually Projection)" feels like running a gauntlet of vaguely irritated chin-strokers aiming the whips of their guitar, reeds, bass, drums at your gut in slo-mo confusion. It all speeds up until it's all spun out, dragging the damaged undercarriage down the musical highway. Part three, "Second Session (Mass Projection)", starts as a full-on drag race for instrumental supremacy, until the electric squall of the guitar corrals the cats into a semblance of advancement. Everyone gets their blows in, but the maestro looms in the background, ready to chastise into (decidedly minimal) discipline when needed. It's a long run, so the pace is set by the flaying percussion, but the tone is measured in a strangely stuttering, energetic pace. Weirdly affecting... yes-yes, this is a bloody masterpiece. 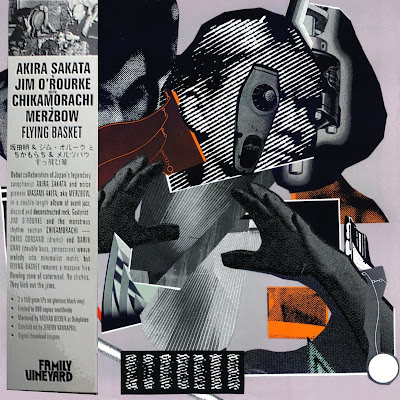 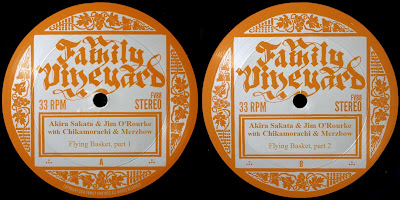 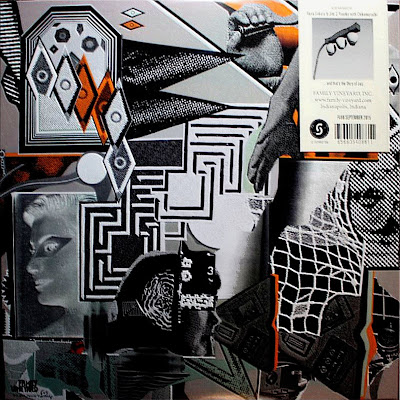 Packaged in a gatefold sleeve with an obi strip, two inserts (one promotional and one informational), and a digital download card. 150g vinyl. Limited to 800 copies.
Jacket reads "Family Vineyard 2014" - however, two to manufacturing delays this is a 2015 release. Insert reads "released September 2015." 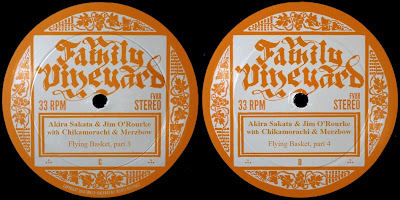 As the smoky licks of Akira Sakata’s opening sax solo suggest, this is, for long durations, not the free-form noise-fest that might be expected.
Jim O’Rourke, on guitar, joins in with subtle alternative or de-tuned chiming and Masami Akita aka Merzbow is only a ghostly background presence. Chris Corsano (drums) and Darin Gray (double bass) aka Chikamorachi make their presence felt only after five minutes as a low rumbling undertow, albeit Gray is soon thrumming with gentle plasticity á la Jimmy Garrison. Akata’s licks then turn to sour drizzle and Merzbow’s noise to thin, whiplash aerations, but after ten minutes the full group is finally in play.
O’Rourke is sounding unusually aggressive from the off, his playing spilling out of the end of the set’s first full-on improv thicket after 17 minutes in a state of wiry, drawn-out tensility, all feedback fuzz and gnarly sonics finally tamped down to near silence: a natural break bringing the first side of the double vinyl edition to a close.
With no indexes on the single-span the near silence is sustained, O’Rourke’s sonic scumble matched only by gently wavering Merz-sound and other noises unplaceable, collectively tense and abrasive but only very slowly, tentatively, testing boundaries, and coming to rest.
In context, Sakata’s birdsong-like clarinet and Corsano’s light-touch percussion sifting is as logical here as it is unexpected, and the duo have space to develop their controlled intensities in isolation. Again, rather than a gradual accumulation of inputs and ratcheting-up, this flighty duet winds down with only the subtlest of other accompaniments until Sakata is fully, thoughtfully introspective, the other players keeping in touch only via subtly thrummed bass, gentle touches of guitar and Merzbow at his most restrained and delicate. 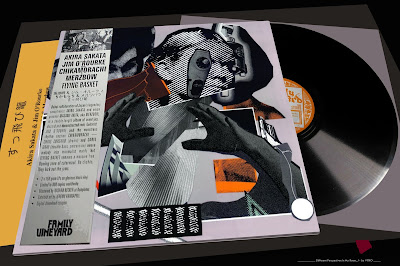 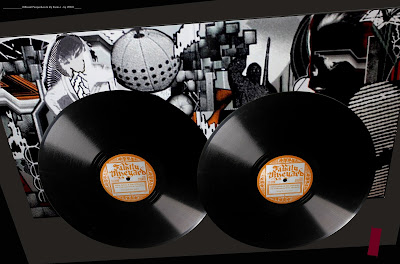 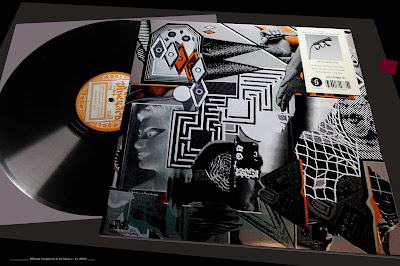 Approaching the 40 minute mark, O’Rourke essays a tersely ductile solo and Merzbow joins in with thin, piping synth tones before bass and drums also kick in. O’Rourke plays gritty chords, Merzbow becomes more aggressive, and Sakata starts chewing over his phrases, blowing with increasing fervour. A sinewy passage this, with avant-rock dynamics soon exploding into ferocious freestyle, O’Rourke fairly shredding.
The blowout abates ten minutes later, lulled by a renewed melodicism in Sakata’s playing, thus wrapping up the third vinyl side as neatly as the first.
A fine, melodious sax solo by turns gruff and altissimo bridges to the next group passage, a tense and compacted crescendo, in which Merzbow and O’Rourke craft ring modulation (cf. Forbidden Planet) and feedback, and Sakata lets rip with guttural vocalisations. In the final straight, the perhaps inevitable payoff in free jazz frictions and raw noise finally floods the levees of control. While Corsano expends considerable energies, O’Rourke’s playing is notably ferocious. Sakata holds back until the very climax, piling in to urge a raucously ear-splitting collective transcendence.
Flying Basket was recorded at Jim O’Rourke’s Steamroom studio in Tokyo, but Akira Sakata rightly shares top billing on a session that casts established relationships in a new light. Sakata and Chikamorachi have recorded four previous albums together since 1991, as have Sakata and O’Rourke, the live double And That’s The Story Of Jazz… ‎(Family Vineyard, 2011) being the only one that brings them all together. Still, this is a finely-crafted session set. Merzbow is the added grit that’s produced a pearl. The scope in subtlety of his contribution may surprise those only familiar with his more uncompromising solo output. 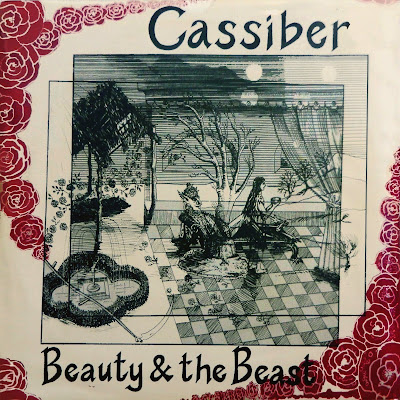 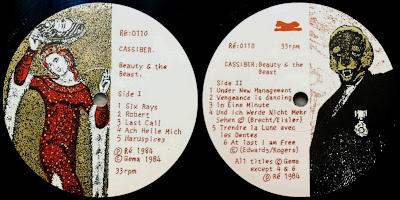 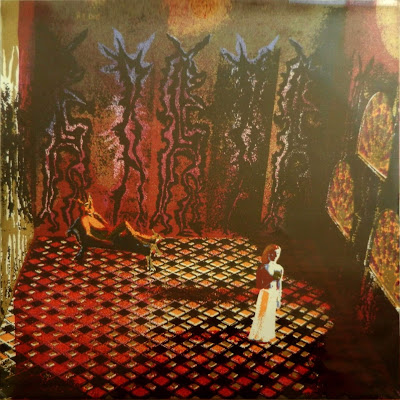 Cassiber's debut album was originally intended to be a one-off, but shortly after its release they were invited to play at the Frankfurt Jazz Festival and further live work followed. A couple of years after Man or Monkey they recorded Beauty and the Beast, which was created using the same methodology as before - improvised composition - but their experience as a performing band had made a difference to their music; on this occasion there was a greater sense of coherence both within the individual pieces and across the album as a whole. 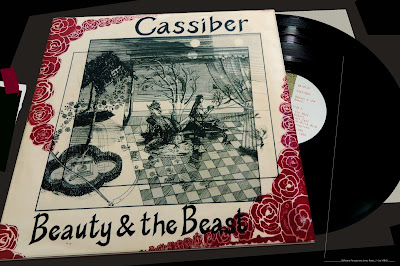 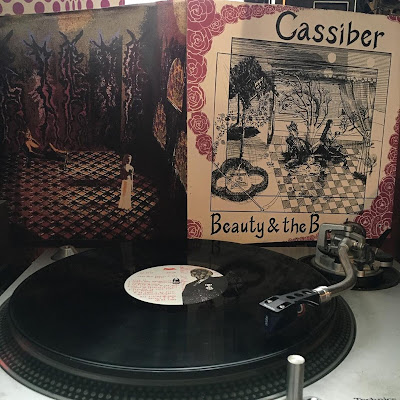 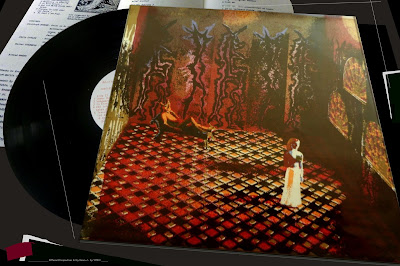 As on their previous outing the album featured a mixture of instrumental and vocal tracks, although on this occasion Chris Cutler's texts were not used as extensively as before. The use of electronics was also more prominent this time around, with cassette recorded voices woven into the fabric of several tracks. Robert, the second track, features a brief snippet of Captain Beefheart reciting The Dust Blows Forward, while elsewhere the vocals seem to have been recorded from German news broadcasts, and for the most part this technique is very effective; on later albums Cassiber would use samplers and electronics even more prominently. Two cover versions are included: Und Ich Werde Nicht Mehr Sehen is a Hans Eisler piece, while At Last I Am Free is a song by Chic that was also covered by Robert Wyatt on Nothing Can Stop Us. At Last I Am Free is one of the album's highlights and manages to be faithful to the spirit of the original but also has the same uncompromising RIO sound as the rest of the album. The more 'free' improvisations veer into some decidedly abstract territory, but the album is sequenced so that they are contrasted with more accessible pieces and many of the tracks segue into each other, creating a constantly shifting mood. There are also moments of real beauty, particularly from Goebell's piano and Harth's saxophone, although any lyrical passages are brief and there is usually something loud, discordant or disturbing to provide contrast.
Beauty & the Beast is an uncompromising piece of work, but it has stood the test of time rather better than Man or Monkey. It's interesting to compare it with Skeleton Crew's debut album, which was released at around the same time and which also made extensive use of taped vocals. Both are very much products of their time, RIO meeting post punk experimentalism, and both see former members of Henry Cow engaging with new developments in music and remaining progressive in the truest sense of the word. If you like one, you'll probably like the other; Beauty & the Beast can be recommended to anybody who likes 80s avant jazz-rock and indeed to anybody inclined to try something adventurous for a change.
(Review by Syzygy)

Plus album add-on:
Came as a special bonus item with subscription copies of Cassiber - Beauty & The Beast.
[Not For General Sale] 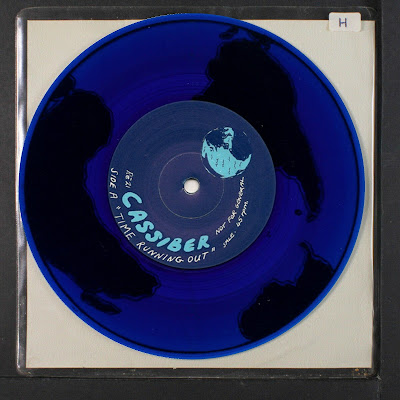 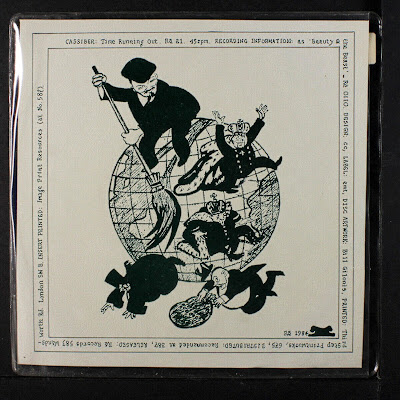 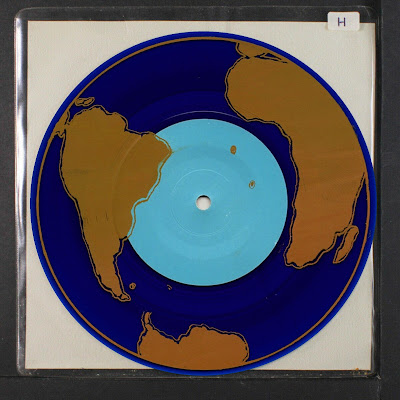 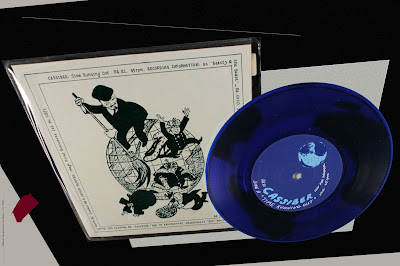 Recording Information: as Cassiber - Beauty & The Beast _ Rē 0110. [Musician credits are taken from that LP. Recorded at Trion Sound, Frankfurt am Main, in April 1984.]