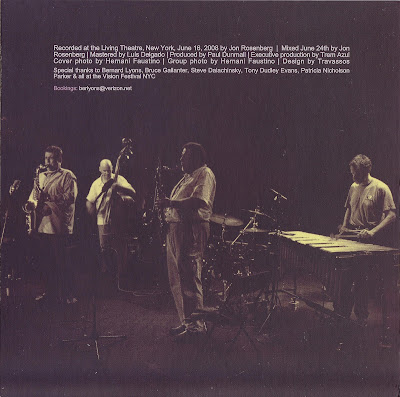 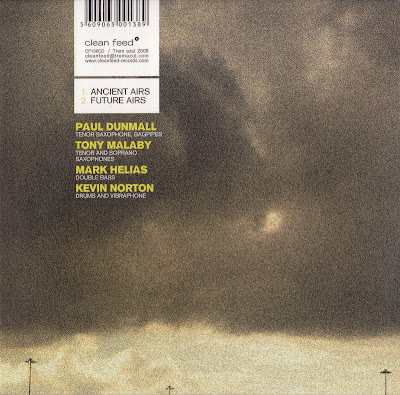 As he has proved in other situations – most notably his two decades long membership in both the London Jazz Composers Orchestra and the collective quartet Mujician – saxophonist Paul Dunmall is the consummate group player.

With wide-ranging influences that take in Carnatic sounds, semi-folk material, so-called Ecstatic Jazz and free-form improv, the London-based musician is known for his tenor saxophone playing, but also tries out other members of the saxophone family – including the saxello – and has recently turned his attention to the border bagpipes.

Each of these ancillary horns makes an appearance on these notable quartet sessions. Recorded in the company of fellow British improvisers, the September Quartet features bassist Nick Stephen and drummer Tony Marsh, the trumpet of Jon Corbett and Dunmall ’ s tenor and saxello playing. Flash forward two years to 2008, when after an appearance at New York ’ s Vision Fest, Dunmall recorded the next day as part of the completely different Sun Quartet. Here his partners are all well-regarded Americans: bassist Mark Helias and Kevin Norton on drums and vibraphone, plus Tony Malaby playing soprano and tenor saxophones.

Dunmall not only showcases his tenor work, but his bagpipe style as well.
Of similar build and hirsuteness, both Malaby and Dunmall bring the same lung power to their tenor saxophone playing, using split tones, inflating diaphragm vibratos and altissimo cries to good advantage. Operating in double counterpoint and exploring individual sonic paths only feature distinguishing Malaby from Dunmall – and vice versa – is that one sax appears to be pitched higher than the other. One sky shrieks while the other favors moderato timbres. Exact identification only happens when Malaby switches to the soprano and Dunmall brings out his bagpipes.

During those sections of the extended improv, Malaby ’ s soprano wriggles in serpentine lines which expose nodes as well as notes and uses a grittier tone to goose the tempo. Far away from pipe band harmonies meanwhile, Dunmall ’ s pipes and bellows pump up the available air supply with widened and pressured tones leading to triple and quadruple multiphonics. As the pitch-sliding bagpipe drone redefines the overall sound, Malaby narrows his output with reed biting abrasive tones.

Helias ’ thick lope and Norton ’ s slaps, rebounds and accentuated drum strokes hold the performance together regardless of the reedists ’ oral gymnastics. However the metallic sparkles and slides instituted by Norton ’ s vibraphone in the tune ’ s slower sections create a unique transitional texture. At points either one or another of his percussion instruments foreshadows tempo and pitch changes, as when cymbal taping introduces internal split tones intensity from the saxophonists or when pin-pointed drum strokes and rim shots usher in a section of mellow and balladic reed runs.

Divided into four long sections, as opposed to the massive single track and short encore that make up the other CD, What Goes Around is another ad hoc set up. British expatriate trumpeter Jon Corbett arrived from his home in Germany to record with his homeboys, who besides Dunmall, include veteran bassist Nick Stephens, who has recorded with everyone from Norwegian saxophonist Frode Gjerstad to American Norton, and drummer Tony Marsh, a frequent Stephens associate.

Unlike Norton, Marsh confines his work to the drum set and the drummer ’ s traditional time- keeping role, only figuratively stepping forward a few times to take sharp and restrained solos. In this different configuration, there ’ s less good-natured challenging from Dunmall – although his work with Malaby could scarcely be termed a saxophone battle – and more tone intermingling. Still, it ’ s the tenor man who, more often than not, steps outside the comfort zone with measured split tones, while Corbett specializes in andante trumpet flourishes, gentling grace notes and muted obbligatos.

At the same time, the brass man does reveal short, frenetic sound bites or hummingbird-quick tube explorations, as he does on “ Follow Me Follow ” . There, his gentling trumpet obbligato precedes soprano saxophone sluices and cymbal vibrations. Abutting one another, the horns ’ output separate lines as Stephens ’bass walks and Marsh’ s drums rebound. With the horns ’ irregular vibrato sweetened with oral splays and growls, the track ends with a conclusive double bass pluck.

Fittingly the four climax with “ All ’ s Well that End ’ s Well ” , with Dunmall back on tenor, Corbett playing chromatic lines, and the rhythm section creating a rolling wave of string- thwacked thunder plus skittering drum beats and rim shots respectively. As the saxophonist introduces squat split tones and slurs to break up the time, he ’ s aided by the bassist ’ s supple cross strokes and half stops. Eventually the trumpeter and reedist stutter tremolo tones at one another: with one man ’ s timbres echoing the first ’ s almost immediately after initial creation. Finally sul ponticello string work, clattering drum beats, brass flutter-tonguing and reed tongue-stops coalesce architecturally, until the sounds gradually diminishing into a warm flurry of grace notes from both horns.

Whichever part of this mixed Anglo-American program you prefer, each CD shows off Dunmall ’ s inventiveness in a context with equally impressive cohorts.

Link in Comments!
Posted by Vitko at 1:25 PM