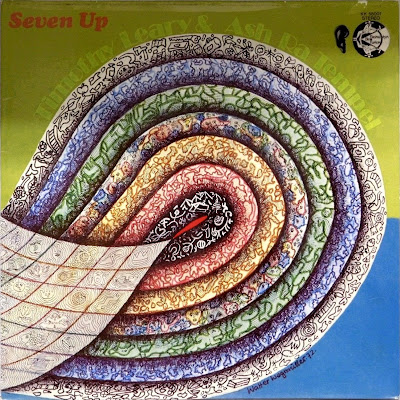 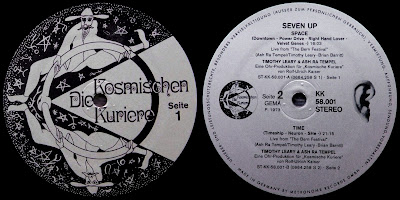 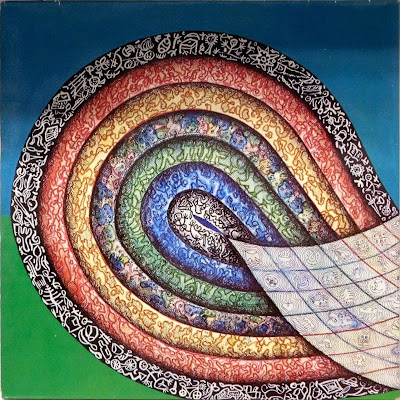 Seven Up is the third studio album by German krautrock band Ash Ra Tempel and their only album recorded in collaboration with American psychologist/drug advocate Timothy Leary. It was first released in 1973.
Seven Up was mainly recorded at the Sinus Studio in Bern, Switzerland in August 1972. Some tracks, like the vocals on "Downtown" by Portia Nkomo and Michael Duwe, were recorded later at Studio Dieter Dierks near Cologne, Germany.
Timothy Leary was living in exile in Switzerland at the time, having escaped from prison in San Luis Obispo, California in September 1970.
The name "Seven Up" was thought up by lyricist Brian Barritt, after the group were given a bottle of the lemonade drink 7 Up that had been spiked with LSD. 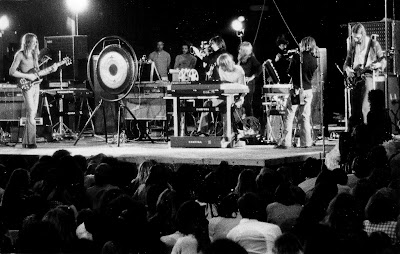 Last call for Ash Ra Tempel, in this form, during the 70s, is Seven Up, an album that rewards the creativity of the gesture with the quality and the sheer introspective madness that lies within the music and within its krautrock definitions, ones that seems rarely pushed to such extents in Ash Ra Tempel. The whole album is a very pretentious an eccentric thing, on one hand we have the incredible group of guests that Manuel Gottsching invited in order to compose and to create Seven Up's musicianship (yet somehow Klaus Schulze's again out of the picture); on another hand we have, once again, two compositions that by the looks seem serious business and important matter to be exposed, the long parts format of music being no doubt the definitory way for qualitative krautrock (I don't know any such piece that doesn't have at least a hint of magic, and that's pretty normal if you think about it, given the space and the time in which you can elaborate the descriptive musical act); and finally we have the essence of the music and the moment of listening to the repertoire, which in whatever shape the first impression will come, it'll reflect a well-done composition in a situation of high regards. To be as short and concise as I can in these first words addressed to the album: Seven Upis probably the second best reflection of Ash Ra Tempel, behind the debut smashing material, or at least in a position "conflict" with Join Inn, another valuable, yet not perfect "enough" creation. An album strikes the impression of good and accomplished, as I've already said, even from the beginning, an album that offers the picture of a voyage into the brand and into the dream of the brand.


Personally some problems and some moments make up a damage sketch within the strong solid kraut construction, still that can be very subjective, because of two things. One, as a personal Schulze fan, these Ash Ra Tempel albums without him seem to be a new different leaf of perspective and make up at least a place for details and issues; Two - related to the first one, but generalized - I am just at my first experiences with the Ash Ra Tempel albums, so I myself can be the one momentarily missing the specific details and issues. Plus, concerning every album, you never know how many listens are necessary to have a final and minute portrait of the album. Perhaps an instant one, perhaps two, perhaps ten.perhaps ultimately none. Yet to be honest and to bring up the presumable negative side of Seven Up as well, it seems to make out some incomplete assets along the way or inserted into the artistical script. It's not something like Schwingungen, who disappointed through misconceived act, it's a thing of short fragments and acute feelings or reactions. Anyway, that's hardly general material for a devalorization, so everything concludes with what I've said: good and important album. 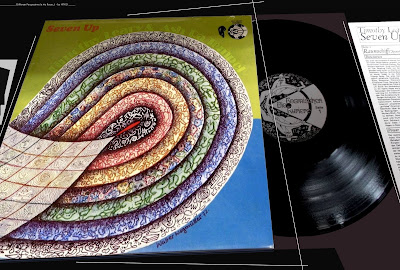 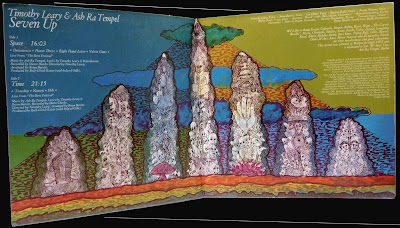 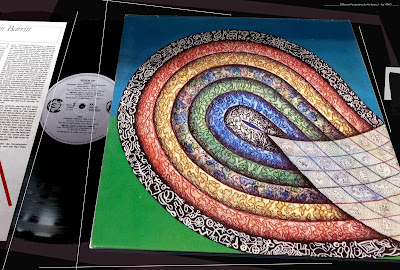 Two cosmogonic entities brought up in a fashionable manner of music (which, maybe not here, maybe rarely encountered, but generally is for me a universal thing). Space and time find roots of expression within a krautrock prolific emblem and representation. The first piece receives an open, dynamics, sharp and direct pulse, made in a special way of chaotic maneuvers, driven into a cosmos furnal essence, making the move towards a rigorous familiarization that to an impression spark. It is something provocative, communicative, expressive to the meaning of a clear circle drawn in an even clearer context. Powerful, energic and vital substance is how Space is portrait. In contrast with that (some, needless to say, more than welcomed) comes the interpretation of Time, which is clustered in its space (or should I use special commas for the word space?), of a slumber refined profile, of a cosmic deluviant message that goes very charming. My favorite piece, but not the only criteria. It has a complexity given by the style and an outlined sphere of subtle emotions given by the approach. It reflects something mysterious, something quiet in its form, but dangerous in its power, going poetic, going voiled, going very decisive on a slow succumbed essence. With other words the time of Ash Ra Tempel here has gravity and has a pronounce dark feverish sensation. Great piece is all I can say in an end of vision. A touch not so common, even if the actual maneuver is a krautrock constant delicatessen.

So my review pretty much indicates an album that has said its word and has outlined its context more than enough. Everything looks good, all that's left is the receiver and the receiver's mood for an epic demonstration of force. Ash Ra Tempel ultimately look as one of krautrock's finest, though I can hardly be the critic to make such a generalization. And Seven Up is ready to prove in every single way. Not masterliness, not ground-shaking, but invigorating as quality and as the uniqueness fragment it shares.deep inside.