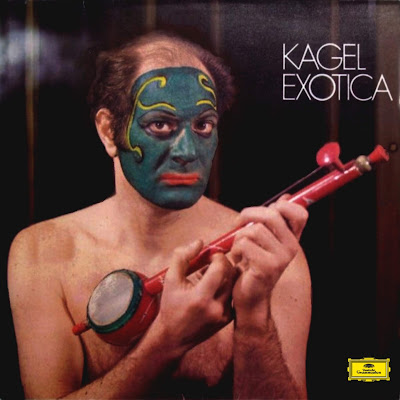 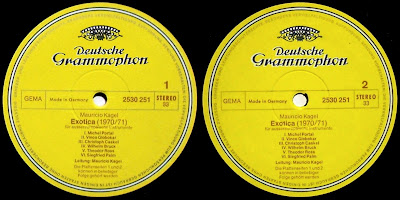 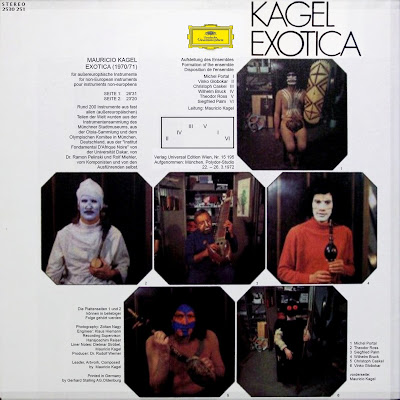 Gatefold cover with 4 pages booklet tacked into centerfold, both showing liner notes and photographs.
Packaging text in German, English and French.
Some 200 instruments were used, from almost all (non-European) parts of the world, made available from the Instrument Collection of the Munich Stadtmuseum, from the Otoia Collection and the Olympic Committee in Munich, Germany, from the "Institut Fondamental D'Afrique Noire" of Dakar University, by Dr. Ramon Pelinski and Rolf Miehler, by the composer, and by the performers themselves. 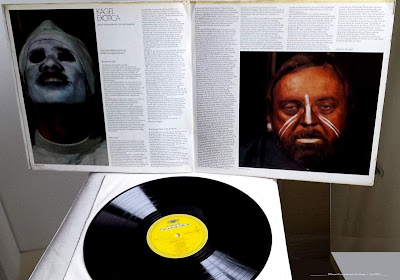 “I have always had the desire to compose a work where the essential condition for each performer lies not in the fact of playing the instrument which they have trained with for years, but an instrument for which they do not possess the technical skills (with full orchestra, the realization of this principle would lead to inconceivable sound effects: a major part of this imperfect result could resemble a perfect interpretation of contemporary music; On the other hand, this work would also call to question the technical skills of the performers, so that with dismay and panic, perhaps somewhat tinged with irony and enjoyment, they would invent original music.) Conventional musicians would most certainly not be thrilled with such a piece. But others?”  — Mauricio Kagel, 1972 (translated from the original text).
Composed during 1971 and 1972, Exotica presents the peculiarity of having been written for extra-European instruments and voice: “a dominant place is reserved for song […]. It is exactly this possibility to sing that seems essential to me; because contrary to the musical practice of other continents, it was systematically rejected by European serious music.”
The work leaves all freedom for the instrumentarium choice up to the interpreters as well as the selection and organization of the various sections. However, the work lacks the elements of a continuous improvisation and, even when the musical indications consist of the imitation of certain musical parameters regarding a recorded medium, the duration of the interventions of every instrumentalist, the parameters of imitation to retain the quality (from ‘most faithful’ to ‘most incorrect’) remain noted with the greatest precision. 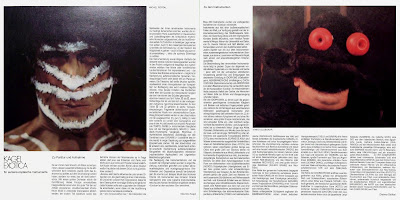 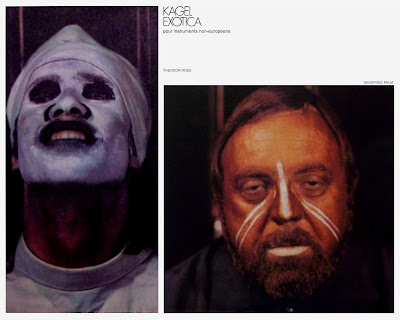 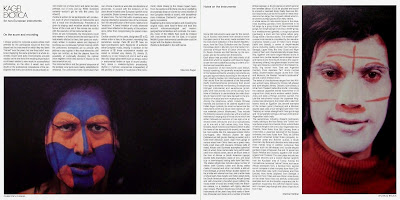 What relationship then prevails between the source of inspiration — the vast cultural heritage of traditional oral music — and the writing of the work? Kagel responds: “in Exotica, my desire was not to incorporate modes, notes and exotic rhythms in a learned way, on the contrary I sought the wild, natural, raw state. […] with Exotica, we are continually suspended over an exalting abyss, which has nothing to do with ethnic music, nor with standard combinations of contemporary music.” In fact, the score often gives the impression of being a transcription familiar to an ethnomusicologist, but a transcription of a particular kind: That of traditional music which the unpredictable imagination of the composer would have reconstituted, where the theatrical spirit and the humor compete in a spirit of musical inventiveness.
Furthermore: “those listening to this piece will also be confronted with a sound world which they doubtless will have difficulty in placing. Does it parody Asian, African or Oriental music? Or are we obviously in the presence of stylistic imitations intended only to slightly blur the intangibility, the aura and the characteristics of the original? Does the resulting music ring of the “exotic” because it was remodelled by a Western composer’s pen? Or, going still further, because the instruments are so typified, that no typically Western music is emitted? Each of these questions deserves answers both diverse and elaborate.” In fact it calls into question our relationship with “other” music and more generally, music’s universality. Laurent Aubert summarizes this questioning in the following way: “our discovery of the music of the “other,” is experiential, a transcultural individual experience from person to person where the perception of otherness becomes secretly entwined with our own sensibilities towards otherness. Listening also contributes to the transformation of the object by imposing new paradigms. We are left to consider a new approach towards notions such as universality or otherness: indeed, if, as it is often said, the music is a universal language, what music are we referring to, when and under which conditions is it considered universal?” (Laurent Aubert: La musique de l’Autre, Georg éditeur, Genève, 2001.) 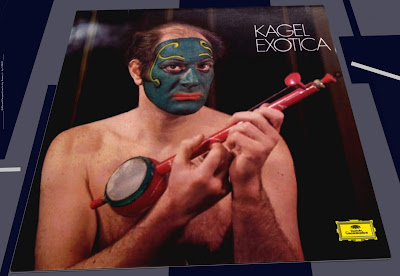 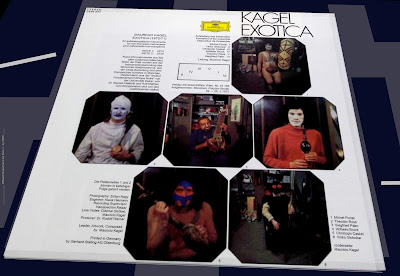 Now, 46 years after the composition of Exotica, when the question of interculturalism and its implications are at the forefront of the media, this interrogation retains all of its relevance. From naive fascination to patronizing caricature, Exotica stages the vast distorted mirror of our world perception, inviting the public to journey to the borders of the construction of musical identity.