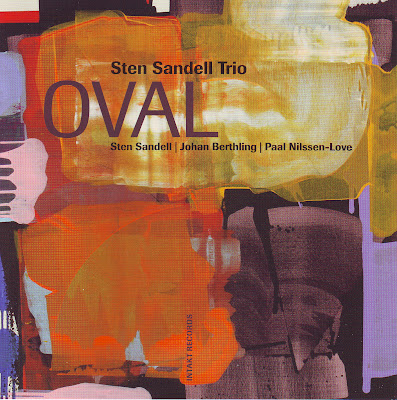 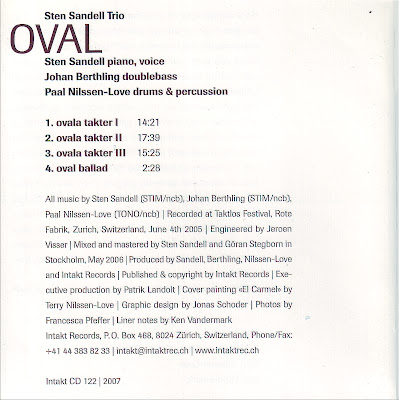 “Sten Sandell ’ s playing may be connected to New Music and Improvised Music, and neither of these musical directions would be associated with what is typically considered as Jazz. However, both Paal Nilssen-Love and Johan Berthling have done considerable work with bands more connected to the history of that aesthetic (in Paal ’ s case, most notably with the quintet, ATOMIC; in Johan ’ s, perhaps the trio LSB). The combination of these sets of experience bring considerable force to the range of possibilities in the music played by this group and on this album. Having this music in the air provides important trace of what it means to be alive in our world that would otherwise be missing. I believe that this trio ’ s playing gives us one more reason to live on this planet with optimism for the future. — “ Why Music? ” A very good answer is provided here, through the sounds and ideas of Sten Sandell, Paal Nilssen-Love, and Johann Berthling working together on OVAL.”

Busy Chicago multi-reed man Ken Vandermark suggests in his liner notes of Oval, the third release by the Sten Sandell Trio, that the Swedish pianist and composer may represent the future of the piano in contemporary and improvised music. Like other pianists of his generation, Sandell is influenced by the innovations of Cecil Taylor but brings many more ingredients to his music, such as the theories of John Cage and Morton Feldman, classical musical elements from India and Japan, folk music from Sweden, electronics, voice, and an idiosyncratic approach to the piano that often uses extended percussive timbral capabilities. Sandell often works with free improvising ensembles, most notably with the Swedish trio Gush, (reed player Mats Gustafsson and drummer Raymond Strid) whom he has recorded and performed with since 1988, as well as other notable European improvisers such as Evan Parker and Barry Guy.
Oval was recorded beautifully at the Taktlos Festival in Switzerland in June, 2005, and featured Sandell with fellow Swedish bassist Johan Berthling and Norwegian drummer Paal Nilssen-Love. All three musicians demonstrate the same exemplary high level of communication and creativity that characterized their earlier releases, Standing Wave (Sofa, 2000) and Flat Iron (Sofa, 2002). Throughout this live set they supply a convincing answer to Vandermark ’ s musing as to why one would choose to play non-commercial music in an inconsiderate climate. The trio explores so many fascinating sonic possibilities within this format that Vandermark ’ s question becomes redundant.
The velocity and density of Sandell’s playing at the beginning of the first piece, “Ovala Takter I”, is an obvious continuation of Taylor’s legacy, but Sandell navigates this trio into newer territories, using varied and complex methods such as sustain, concentrated attacks, or adding light vocals. He manages to turn aural textures into deep meditations about the possibilities of the piano, more in common with the ethereal and almost transparent playing of the British free improvisation group AMM ’ s John Tilbury, showing the imaginative interplay between members of the trio. The trio keeps a contemplative dynamic at the beginning of “Ovala Takter II,” trying to find common threads in its timbral explorations, and reconstructing its fragile interplay. At times, Sandell’s percussive piano triggers Nilssen- Love ’ s wise use of the cymbals, creating a resonate sound between the two instruments. Berthling ’ s low-end rumination on the bass opens “Ovala Takter III,” while Nilssen-Love and Sandell color his sound with abstract and slowly forming textures that linger in memory. The short and concluding piece, “Oval Ballad,” suggests a gentler example “I believe that this trio’s playing gives us one more reason to live on this planet with optimism for the future”, concludes Vandermark; and indeed Oval is a remarkable recording.

Link in Comments!
Posted by Vitko at 6:28 PM