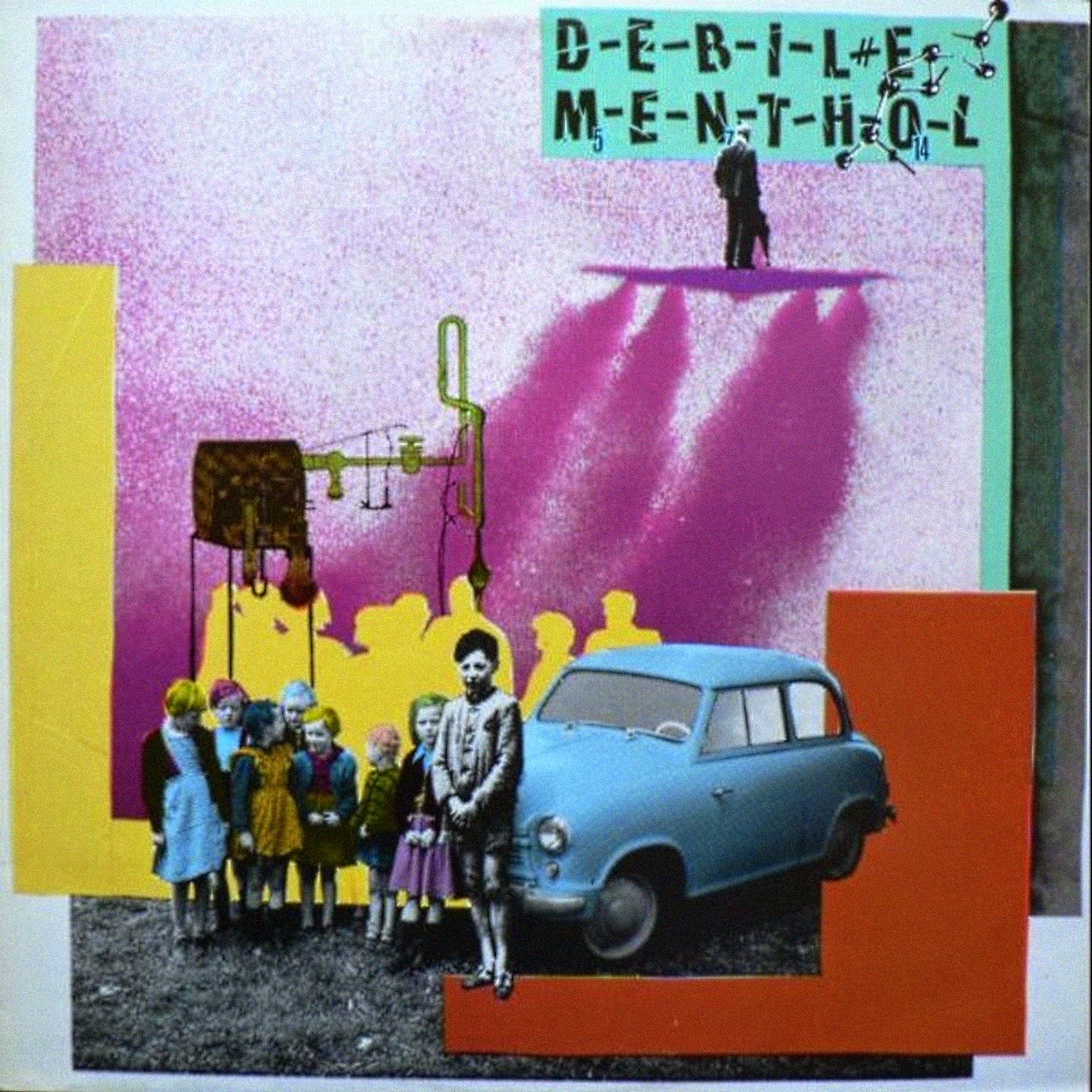 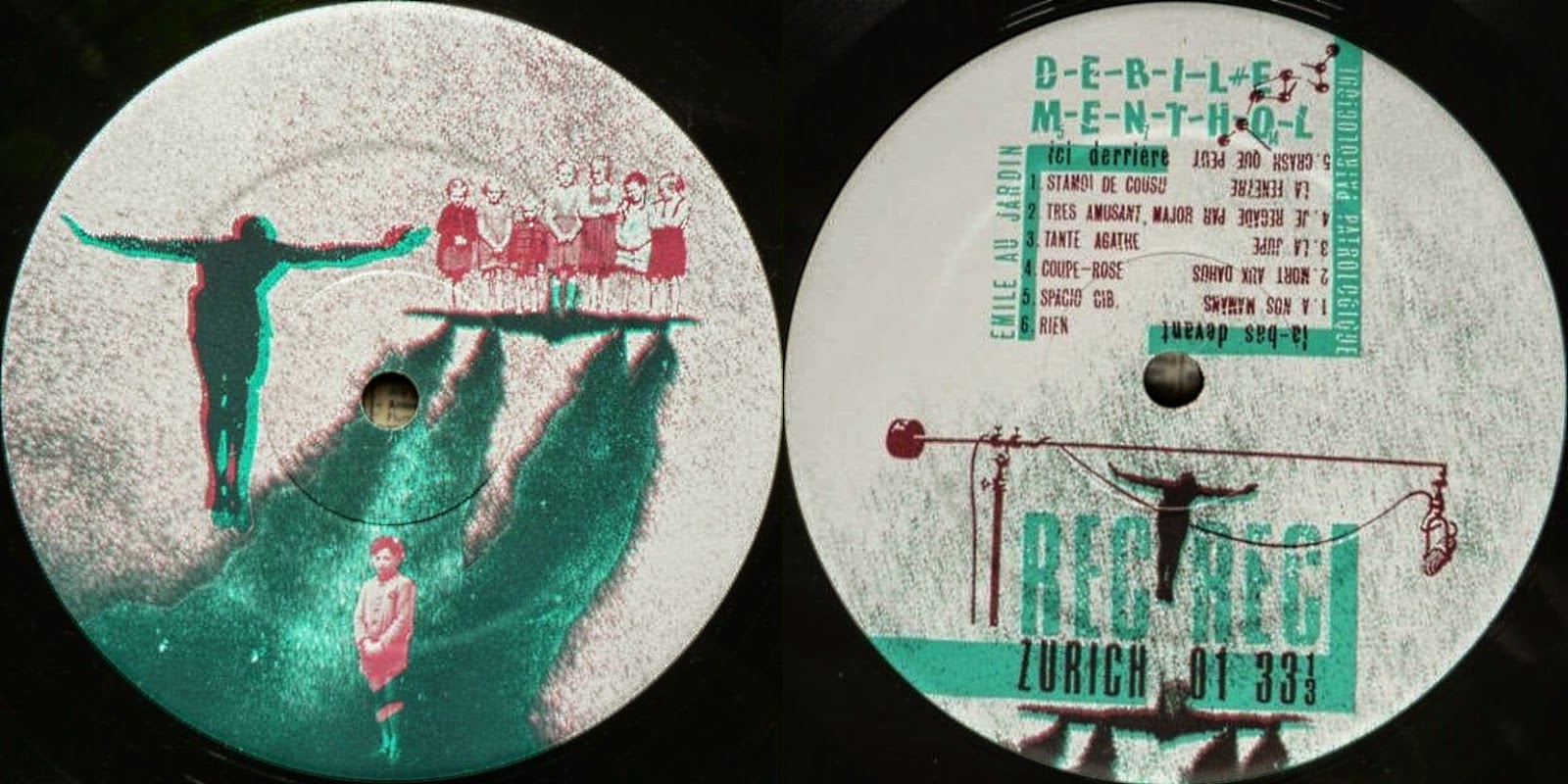 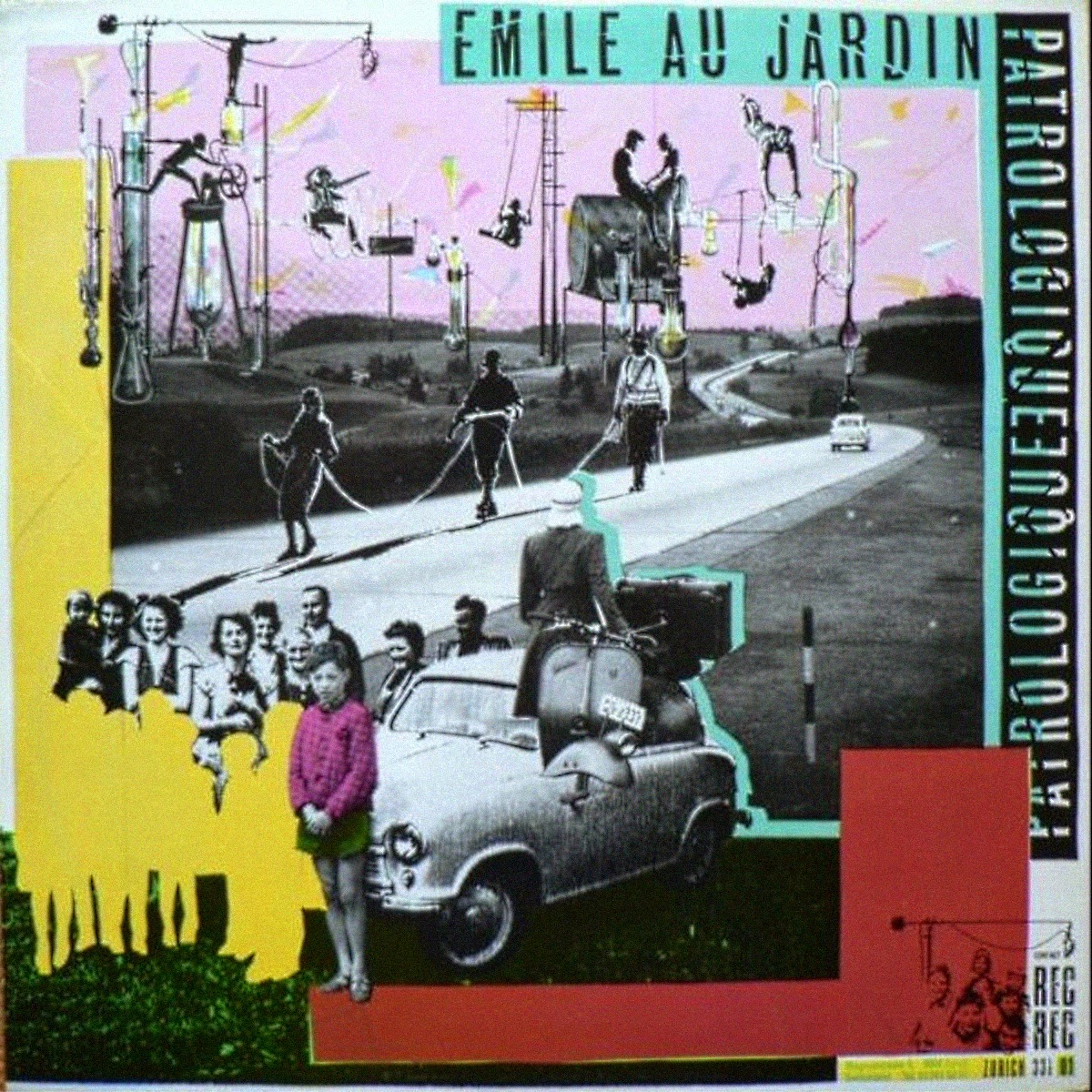 Débile Menthol comes as the Swiss response to the Belgian Aksak Maboul with a Nutty side probably even more pronounced and from here and there, some specific to the time influences (very Talking Heads "A Nos Mamans'' and "Crash Que Peut").

Essential RIO band, this group uses sophisticated rock based compositions and a very strange sense of humour to make some of the greatest pieces of complex rock music imaginable. Chris Cutler states that, while many bands are thrown around as belonging to RIO, this is one of the bands that would have been invited had the timing been possible. 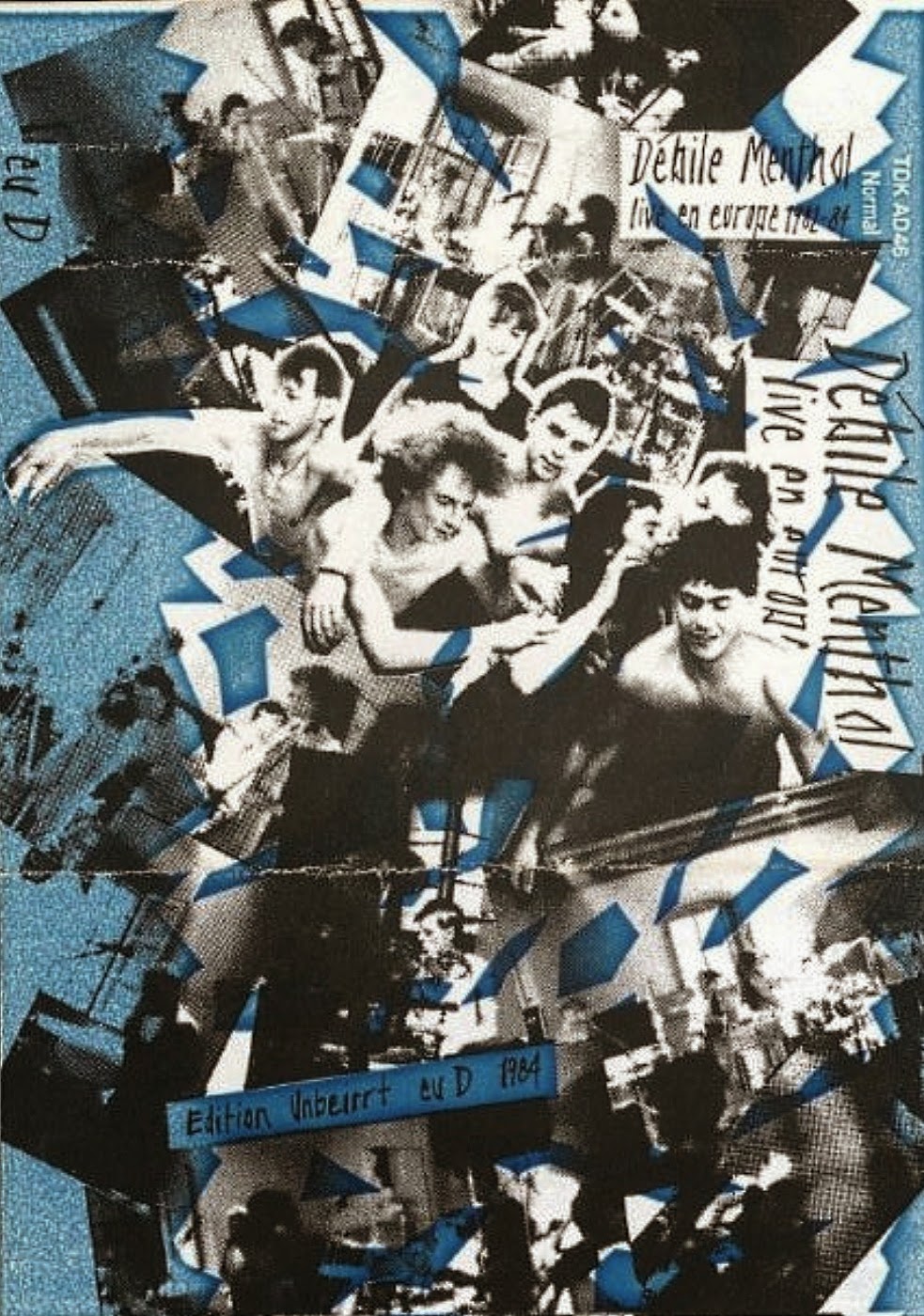 Once upon a time in Neuchatel, Switzerland there was this band called Debile Menthol who played Rock In Opposition in the vein of Samla Mammas Manna, Etron Fou and Henry Cow and with a sort of minimalistic approach that reminds Massacre (Fred Frith).
Founded in 1979, this band managed to record only two albums - Emile Au Jardin Patrologique (1981) and Battre Campagne (1984).
The first album is rather cheerful sounding (with occasional darker parts), jazzier and has a large lineup consisting of 9 members (playing on violin, sax and clarinet among others). This album can appeal to Samla Mammas Manna and Miriodor fans.
Overall this is a weird sounding band, which created a mix of quirky rock, punk, fusion, free jazz and plain eccentricity. The lyrics (when there are any) are being spoken (sometimes at high tone) in a non-melodic style (not sung and to me reminds of Massacre and The Clash) in French and filled with satire and humour (as their name might suggests). During their tours the band was under financial and personal stresses which lead to its disbanding and the creation of two other bands. 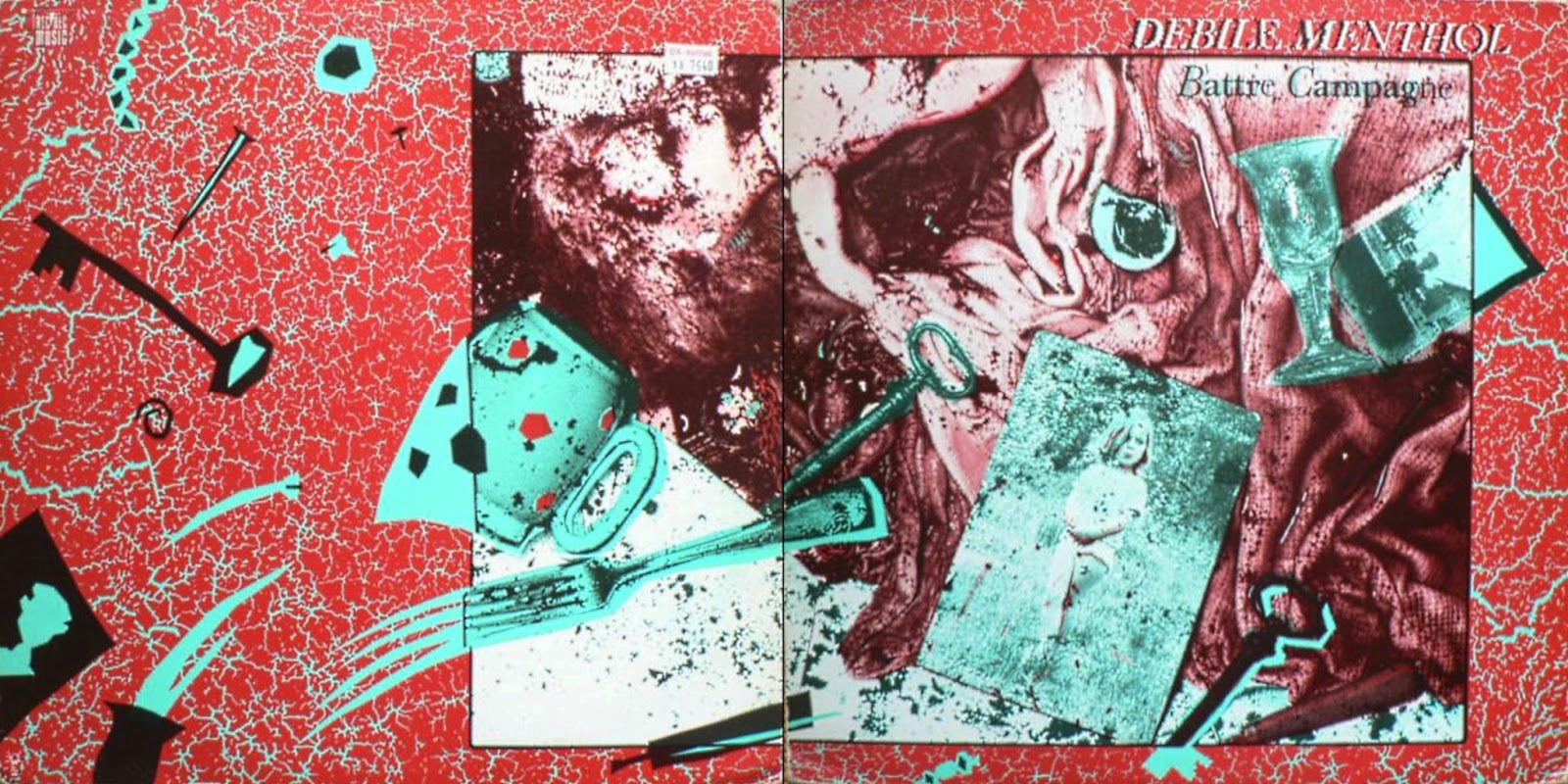 Recorded in the Fall of 81, Debile Menthol's debut album is very much in advance of its time and was obviously very influential for many group that are developing the Avant Prog genre (whatever that may be) today. From the Quebecois Miriodor, Rouge Ciel and Interference Sardine, to Finland's Alamaailman Vasarat or Uzva, to Belgium's Julverne, X- Legged Sally Hardscore or Cro Magnon etc.: all of these groups owe IMHO a big debt to Debile Menthol's works. Debile Menthol is a 9-man formation (most are multi- instrumentalists), from which will emerge Rossel and Huguenin.

While Debile Menthol's music is a rather crazy pot-pourri of musical influences and borrowings, they often remain fairly accessible, fun, often going into the bombastic and grotesque folkloric fair music (like the Oktoberfest beer-bingeing music or circus music for example). The album is fairly acoustic (just some synths and electric guitars) and mainly instrumental, with only a few weird French rather-funny vocals in off-voices, but they can get demented as well. In the album highlight A Nos Mamans (To Our Mothers), they sound for a small minute like the Sranglers, if you can believe it. Other tracks can sound like some crazy Devo or Talking Heads (Regarde Par La Fenêtre and Crash Que Peut), but the whole thing being much more complex and as much fun.

Most likely one of the most influential album in the "Avant Prog" genre, given its early release date, and a fun one too. Only for progressive nutheads with a few loosened bolts above the neck level.
_ Review by Sean Trane

Note:
I have listened to this album at least 20 times through, and it never ceases to amaze me. The instrumentation on this album akin to the virtuoso lunacy to be found on Begnagrad's eponymous album. Strange melodies and song structures dominate this LP, from the folksy, classically-influenced musings of Tres Amusant, Major to the haunting industrial vortex of Rien. I speak very sparse French, so I have no idea what these people are saying, and that is probably for the better. This album, as a whole, exhibits a slightly unhinged quality, as one would experience in a conversation with a seemingly normal person who nevertheless seems barely able to conceal his/her insanity. Bubbling beneath the surface of this album is a kind of demented-circus-quality of madness that seems at once both endearingly amusing and subtly dangerous.
A must-have album for those who enjoy like their prog waaayy out there.
_ jglowe77