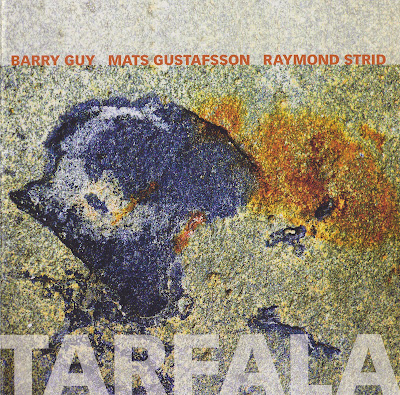 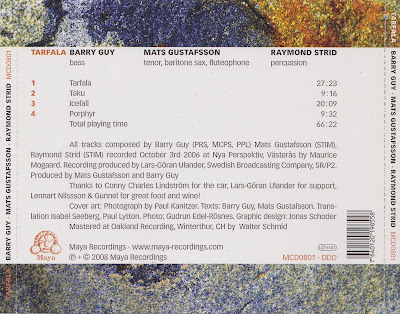 I've read interviews with jazz musicians that have told of their first hearing John Coltrane's LP A Love Supreme (Impulse!,1964) and their seemingly inability to turn over the vinyl and play the second side, fearing that it would not compare to the first side. This listener had a similar experience listening to the first (and title) track of this recording. Clocking in at more than twenty seven minutes, it is an entire meal in itself, leaving one satisfied or wondering if the remaining thirty minutes of music could possibly be as good.

I tell you this, because for the past week I was unable to listen past the first track. And yet, I was thoroughly satiated.

The trio of Barry Guy (bass), Mats Gustafsson (sax), and Raymond Strid (percussion) might be looked upon as a substitute for the infamous Evan Parker/Barry Guy/Paul Lytton trio. But great listeners shouldn't miss this ensemble. The two Swedes, Gustafsson and Strid form a similar improvising trio called GUSH with Sten Sandell, and have played with Guy in some of his various ensembles. These three have in fact recorded together. In 1994 they made a disc You Forgot To Answer (Maya) [soon on this blog], and good luck finding that one.

The title track bears all the fruits of a free-thinking sax/bass/drums session. Gustafsson, the nu-new thing superstar sounds like a DNA spliced offspring of Evan Parker and Peter Brotzmann. He can play the quietest breath key taps where listeners lean forward in their seats to hear to the full metal blasts of Brotzmann's—Machine Gun (FMP,1968)—violence. On the title track he gives us his all with Strid and Guy encouraging his exploits. The energy swells and recesses, popping circuits off the listeners receptors even in the quietest moments.

The much quieter and reflective "Taku" finds Mats switching between saxophone and fluteophone, Guy bending notes in this quasi-ambient setting. As the track progresses, and unravels into a more outward direction, the three stick to small gestures and restraint. The tension building is symbolic of their confident approach. The other relatively quiet track is the jittery interplay on "Porphyr," with a slowly building intensity of Strid's percussion ramblings into solid cymbal work and drumming. Gustafsson blows a marathon baritone saxophone as blunt object of choice.

What listeners anticipate from a Barry Guy recording is shown here with his solid support for partners and his acoustic electronica. Guy has the ability to generate sounds and energy not unlike a producer or DJ covering both the bottom and the background of a recording. The 20- minute "Icefall" finds him standing toe-to-toe with Gustafsson's fire breathing and spreading wave upon wave of dynamic flowing vitality. The track ends with Gustafsson playing some vibrato signaling attention back to the simple percussion, bass, and breath. Indeed, a thing to admire.