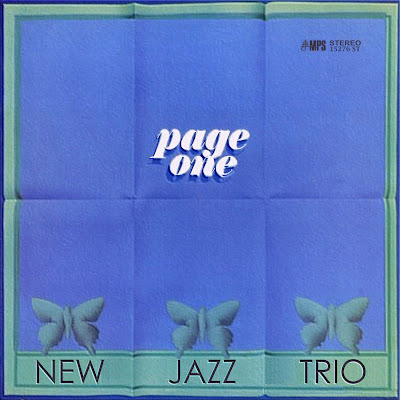 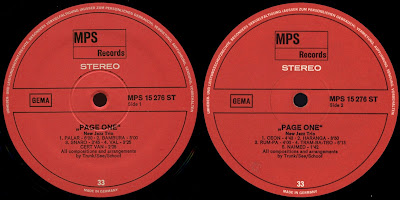 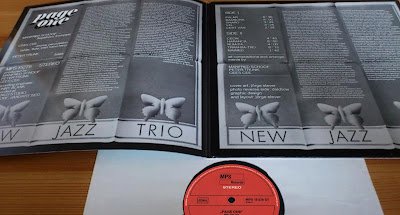 CEES SEE (born 5 January 1934 in Amsterdam, † December 9, 1985) was a Dutch jazz drummer and percussionist.
The self-taught first played with the Dutch band The Miller and Jack Sels, Herman Schoonderwalt, Rob Madna, Pim Jacobs, Kenny Drew, Donald Byrd, Wolfgang Dauner and Dusko Goykovich. He became known in the second half of the 1960s as a member of the quartet by Klaus Doldinger. He then played in the New Jazz Trio by Manfred Schoof, but also took up with Olaf Kübler and with Volker Kriegel. He founded his own Perkussionistenquartett, was the first jazz drummer in the Netherlands, who taught at a conservatory, and published the treatise "The drums in jazz." In 1956 he was briefly married to singer Corry Brokken.

PETER TRUNK (born 17 May 1936 in Frankfurt am Main, † 31 December 1973 in New York City) was a German jazz musician (bass, bass guitar, cello), composer and arranger. He first played with the British trumpeter Stu Hamer and the German pianist Werner Giertz. In 1957 he accompanied American jazz stars such as the tenor saxophonist Zoot Sims and drummer Kenny Clarke, 1959 the equally famous tenor saxophonist Stan Getz and the Dutch singer Rita Reys. He was well known by the early bands of Albert Mangelsdorff, in his "jazz ensemble of the Hessischer Rundfunk" he played well. In the early 1960s he was house bassist of the Berlin Jazz premises "Blue Note" (his colleagues were the Dutch and the German pianist January Huydts drummer Joe Nay).
In 1966 he took part in the recordings of the music of the film Will Tremper-film Playgirl part. Under the direction of Peter Thomas can be heard on the soundtrack released on a Philips LP also Klaus Doldinger (sax), Ingfried Hoffmann (Hammond organ) and Rafi Luderitz (drums).
Later trunk was involved with Klaus Doldinger and the orchestra of Kurt Edelhagen. In the years up to his death, he played free jazz in the tradition of Don Cherry and Ornette Coleman, for example, in the new jazz trio with trumpeter Manfred Schoof and drummer Cees See.
His play on the double bass was characterized by a sonorous, full, round tone, melodic and rhythmic precision and a variety of ideas. Also noteworthy are his play on the electric bass and the cello.
In the spring of 1973, Peter Trunk founded his octet sincerely pt with the sheet set Manfred Schoof, Shake Keane and Jiggs Whigham, and the rhythm section of Jasper van't Hof, Sigi Schwab, Peter Trunk, Joe Nay, Curt Cress. He self-produced their first recordings with the new lineup. During the subsequent tour Udo Lindenberg Doldinger's Passport to replace the exchanged Curt Cress. Immediately before the second tour his tragic fate overtook him in New York he was fatally injured in New Year's Eve 1973 by a taxi driver. Trunk was from the late 1950s to 1973, one of the most significant jazz musicians on the European jazz scene.

MANFRED SCHOOF (born April 6, 1936 in Magdeburg) is a German jazz trumpeter (also flugelhorn, cornet) and is considered "the great romantics among the acts in Germany jazz avant-garde" (Hans Kumpf). He has also appeared as a composer. From 1990 he was professor at the Academy of Music in Cologne. 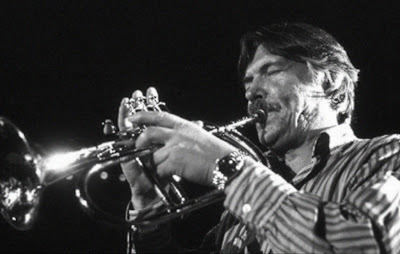 Schoof studied 1955-1957 at the Music Academy Kassel, 1958-1963 at the Academy of Music in Cologne, where he was a composition student of Bernd Alois Zimmermann. He first played with Fritz Muenzer and Gunter Hampel and with Harald Banter. His first quintet he founded in 1965, this was a pioneering and leading role in the development of free jazz in Europe only to 1967 existing group. "Born of an elaborate compositional frame of reference and a great attention to formal details" is its documented on three albums music "quite in balance of design and compositional freedom". Schoof continued to work with artists such as Albert Mangelsdorff, Peter Brötzmann, Mal Waldron , Irène Schweizer, the Kenny Clarke / Francy Boland Big Band, the Gil Evans Orchestra, the German Allstars and the George Russell Sextet together. He also works with since its incorporation in 1966 at the Globe Unity Orchestra. As an arranger and soloist, he also worked for Kurt Edelhagen.
Also Schoofs interpretations of various works of contemporary music (such as "The Soldier" by Bernd Alois Zimmermann and Johannes Fritsch) caused a sensation. After he appeared in the early 1970s with his New Jazz Trio, which he also a clever improvising string quintet combined, he founded in 1975 his second quintet, which in addition to the Luxembourg bass clarinetist Michel Pilz and the Dutch keyboardist Jasper van't Hof was the rhythm section of the classic Albert Mangelsdorff Quintet (Günter Lenz and Ralf Hübner). The quintet rehearsed with this plate Scales in 1977 "a virtuoso and also colored music, playing together in the intellectual and the emotional in a special way," honored as the great German Record Prize. Schoof in 1980 received the first Price of the Union German jazz musicians. In that year he founded the Schoof Orchestra began in 1982 and a multi-year collaboration with pianist Rainer Brüninghaus. Since 1987 he is member of the George Gruntz Concert Jazz Band and the European Jazz Ensemble. From 1996 on, he played with Albert Mangelsdorff, Klaus Doldinger, Wolfgang Dauner and Eberhard Weber in the lineup Allstar Old Friends.
Although pioneer of free jazz, he has always stressed the bond to form models and chord material of tradition and placed on the desirability auskomponierter games. "His tendency to chromaticism in harmonic-melodic range corresponds to a preference for rhythmic rubato, which are used with a sure sense of tension" (Martin Kunzler). Beyond the jazz he composed choral and orchestral works, including a 1969 first performed with the Berlin Philharmonic Trumpet Concerto, written in 1975 and was commissioned for the Donaueschingen Music Days. He also wrote numerous film and television soundtracks, including the hit series WDR The sparrow from Wallraf Square. He is also involved in the design of the musical program with the mouse.
Since 1972 Manfred Schoof has been a music teacher. He was since 1981 teaches trumpet and jazz history at the Cologne College of Music. He is also a member of the Board of GEMA. He is on the board of the Union of German jazz musician.
In December 2006, Manfred Schoof was awarded the Federal Cross of Merit.

A pleasure for collectors. Enjoy!