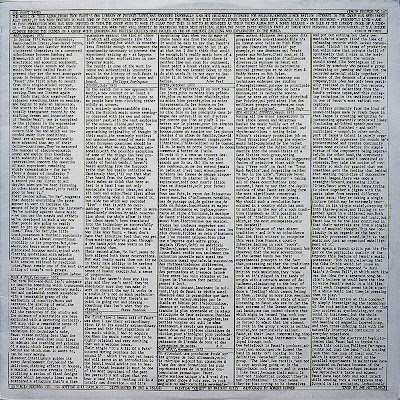 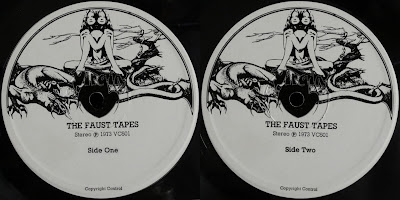 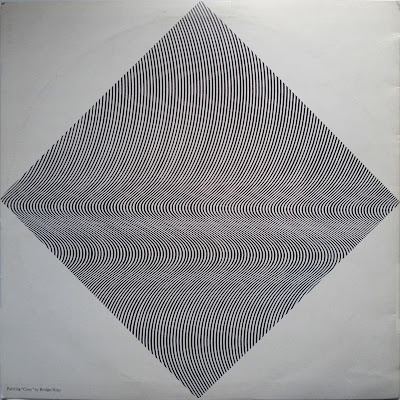 Text panel at the top of the front cover:
"The music on this album, drawn from Faust's own library of private tapes, was recorded informally and not originally intended for release. However, since British interest in the group has been unusually great, it has been decided to make some of this unofficial material available to the public in this country. These tapes have been left exactly as they were recorded - frequently live - and no post-production work has been imposed on them. The group wish to make it clear that this is not to be regarded as their third album, but a bonus release - on sale at the current price of a single - to mark their signing with Virgin Records, for whom they will shortly be recording their next official album. The Faust Tapes reveals Faust at their most personal and spontaneous. It's a unique glimpse behind the scenes of a group which European and British critics have hailed as one of the most exciting and exploratory in the world. Virgin Records"

The rest of the front cover text is made out of press quotes from: Best, Rock & Folk, Sounds, Disc, Extra, Pop Music, and New Musical Express.

Black & white 'twins' Virgin labels indicate Side One and Side Two without any track titles, some parts were specified on later reissues. Musicians are uncredited.
The cover has a 'fluted spine' (pinched at both edges). 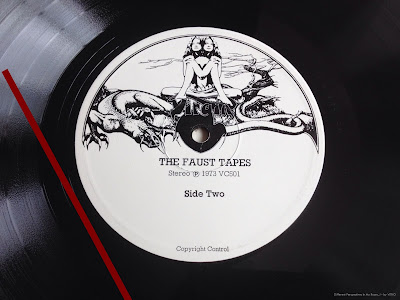 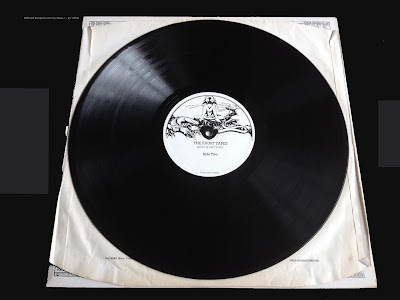 . "The Faust Tapes" is yet another Faust masterpiece in which their collage-oriented ideology meets a more robust and aggressive expression than in their debut album (which was, indeed, quite intense). Even the more conventionally pop sections and the calmer passages intrinsically bear that typical Faustian bizarre feel, since there's always that impending doom that signals at the possibility for an abrupt change to bring in some sort of insanity - you just can't stop keeping the whole picture in mind (either retrospectively or prospectively) while listening to a specific section. Let's check over what happens during the first 14 minutes: random piano chords on reverb - tribal drumming accompanied by a Zappaesque choral arrangement - an acoustic ballad that reminds the listener of Dylan and The Byrds - singers struggling to gradually reach their highest tone, which is followed by aleatory washes of piano, trumpet, guitar, harmonica, percussion and demented chanting - a half French/half English-sung rocker that states a compromise between The Rolling Stones and The Grateful Dead, with hints to Barrett-era Pink Floyd. All this and more in a most bizarre (at times ,verging on the intolerable) 44 minute pastiche! Once again, I find myself granting a very high rating for an album that I can't honestly recommend to all prog fans alike. While this album is patently designed to draw the unfriendly listener away (miles away, to be more accurate), that won't detract me from regarding it as essential in the history of prog rock, and of course, the history of krautrock. Well, if krautrock was in itself a world apart within the world of prog, Faust created their own world within the aforementioned world apart, and this album certainly epitomizes the most accomplished qualities of their hyper-subversive style. Once I've stated this conclusion, I hope I made myself clear about why I see myself obliged to give this album 4 stars (4 1/2 stars in my mind).
(Review by Cesar Inca / ProgArchive) 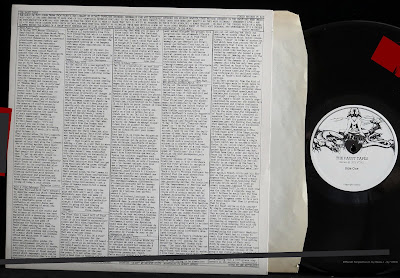 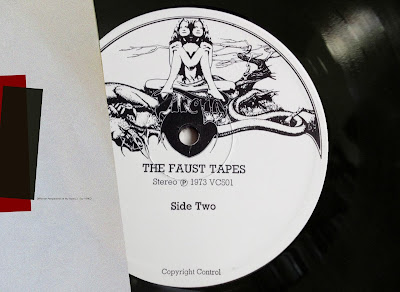 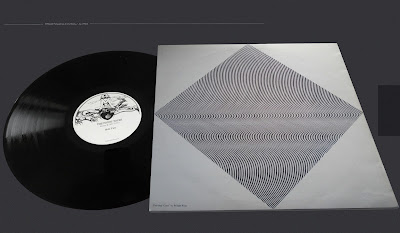 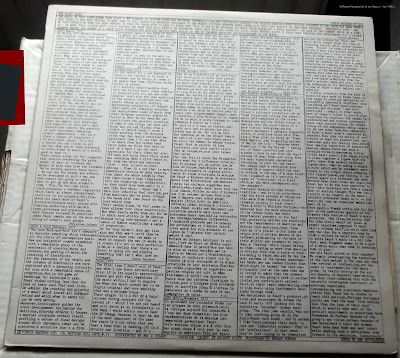 While the first Faust albums were definitive Krautrock statemernts, their collaboration (Dream Syndicate) with a minimalist obviously perverted their spirit and Tapes is the real result: one of the very first RIO album (avant-la-lettre, though) that boggles the mind, but can also disturb unaware/unwarned listeners. This often-phantasmagoric soundscape is one of its decade's most influential albums, obviously heard by the Henry Cows and others. Rather hard to describe, the music often is just "bruitages" and montages of almost-industrial noises, but has some rather more accessible (almost easy) moments and some downright strange/disturbing "tunes", rendering the whole mix quite unnerving. Quite a strange but sometimes-wonderful trip. Bassist Jean-Hervé Peron to the French-sung finale the album is over. Incredibly madness.
Are you going to press replay immediately?
(Review by Sean Trane)

This concrete Adonis is built on hairpin turns through already strange, experimental, diverse, and unique musics and sounds and even some peppered in studio talks for that "In My Time of Dying" feel two years early. I can hear free jazz, noise, and proto- industrial alongside the snippets of more familiar krautrock kraziness. A happy surprise comes in the form of some pieces being long, providing some wonderful extended jams that are also respites from the insanity. This is more than just a representation of track skipping/channel hopping in intentional musical form, this is "Breathless" in album form. This defies category; it isn't even really concrete as we'd generally identify it; just mumble 'avant garde' and run. Excellent music in a groin smashing format. For the progheads who like surprises. I need to lie down.
(Review by LearsFool)