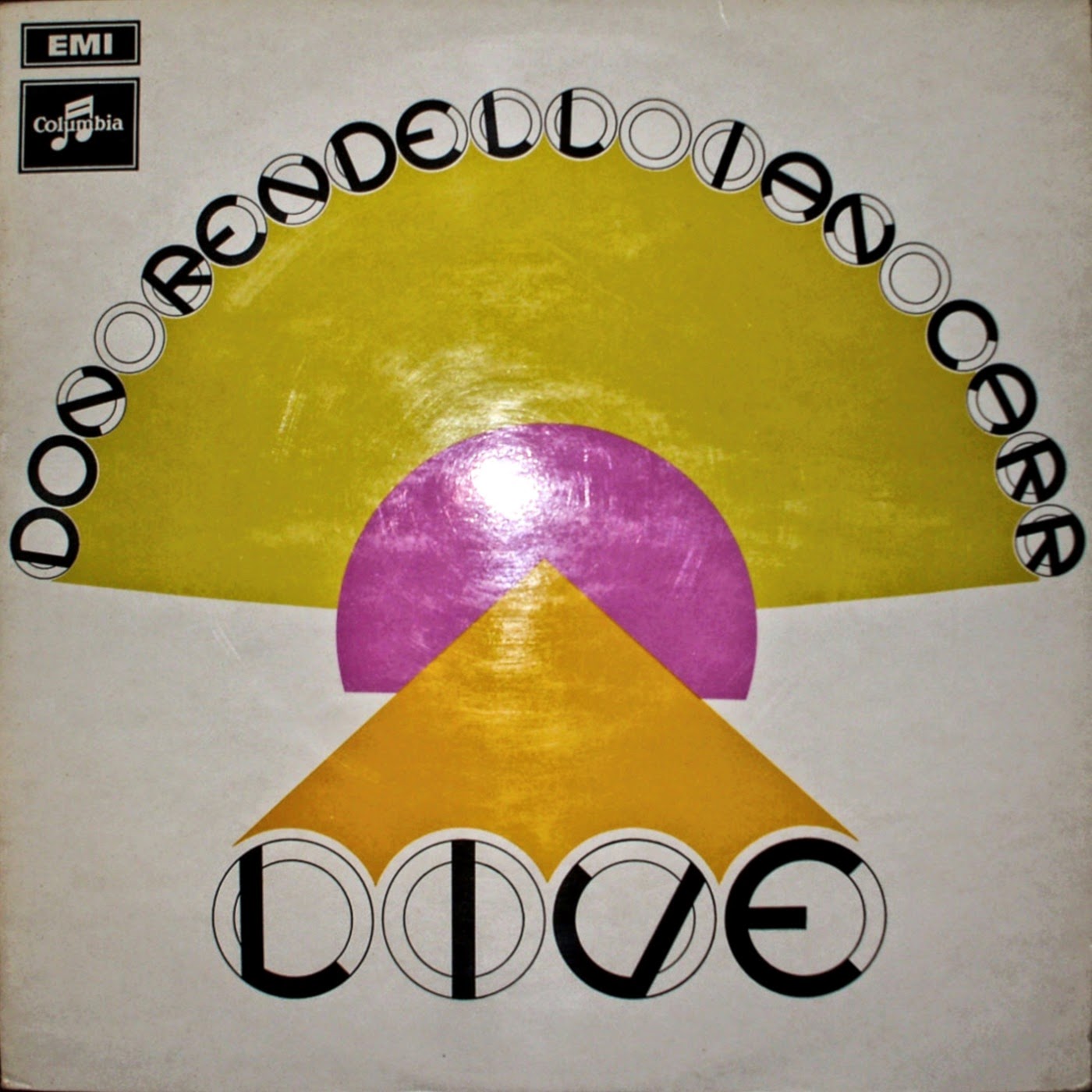 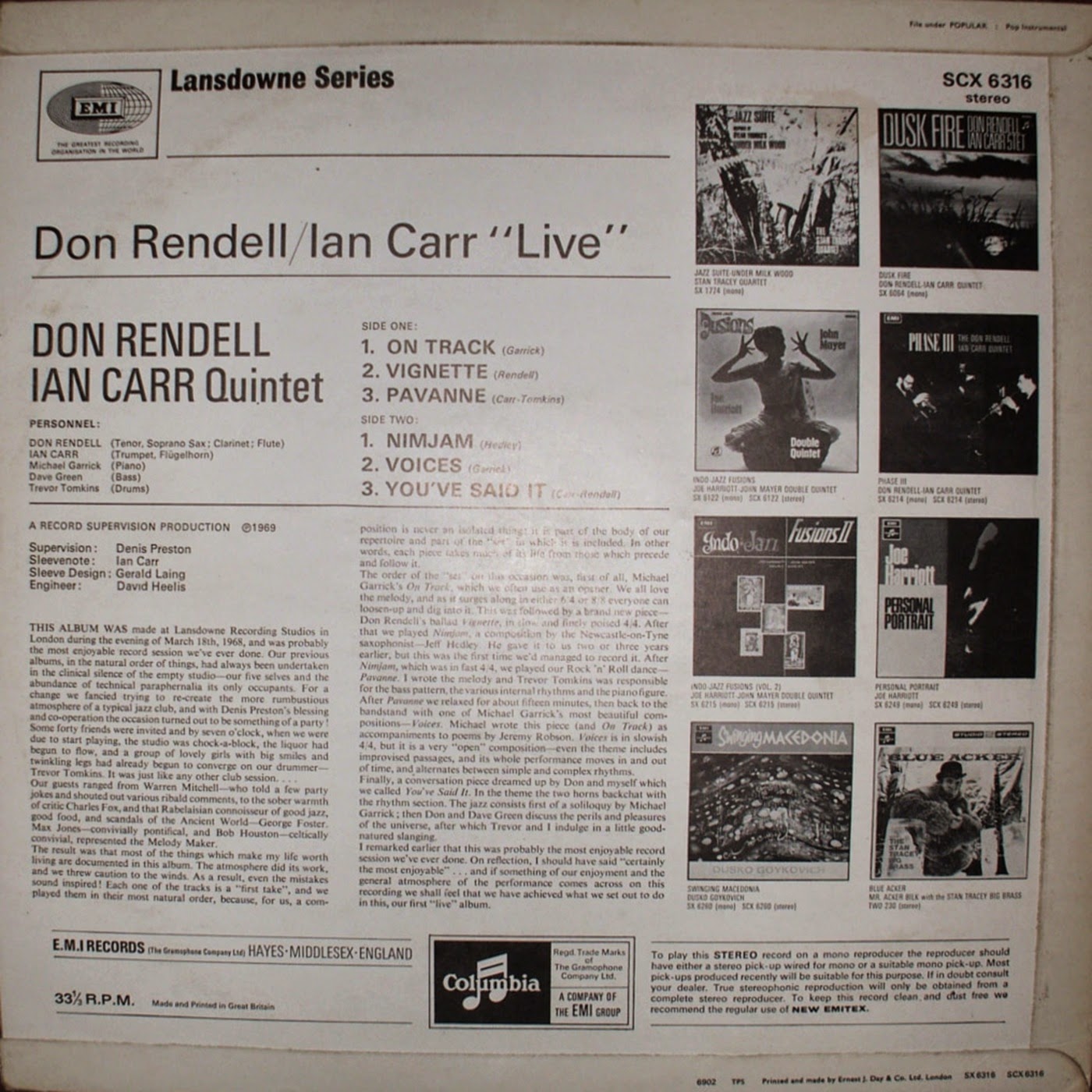 Back in 1962, Don Rendell had a quintet with Graham Bond on alto.  “Graham phoned up out of the blue and told me he was going to play the organ and sing,” Don told me.  “I wasn’t thinking about having an organ and singing in the quintet, so we just parted.  I had no notice about it.”  That band had not long released an album, Roarin’, on the Jazzland label.  Tony Archer, the group’s bassist, suggested Don check out Ian Carr, newly arrived from Newcastle.  “He was playing at the Flamingo Club with some band,”  Don explains.  “I thought he’s good, so I said to Tony, ‘Yeah, we’ll try and get Ian to come in.’  It just changed over night from Graham Bond to Ian Carr.”
Ian was playing with Harold McNair, the Jamaican reedsman.  He takes up the story,  “I’d come from the MC5 (Mike Carr Five) – a world class band – and Harold didn’t really have any kind of policy and wasn’t very well organised.”  Ian jumped at the chance to join what was then the new Don Rendell Quintet.  Meanwhile, John Mealing had replaced original pianist John Burch, Trevor Tomkins was now the drummer and shortly after Dave Green took Tony Archer’s place. 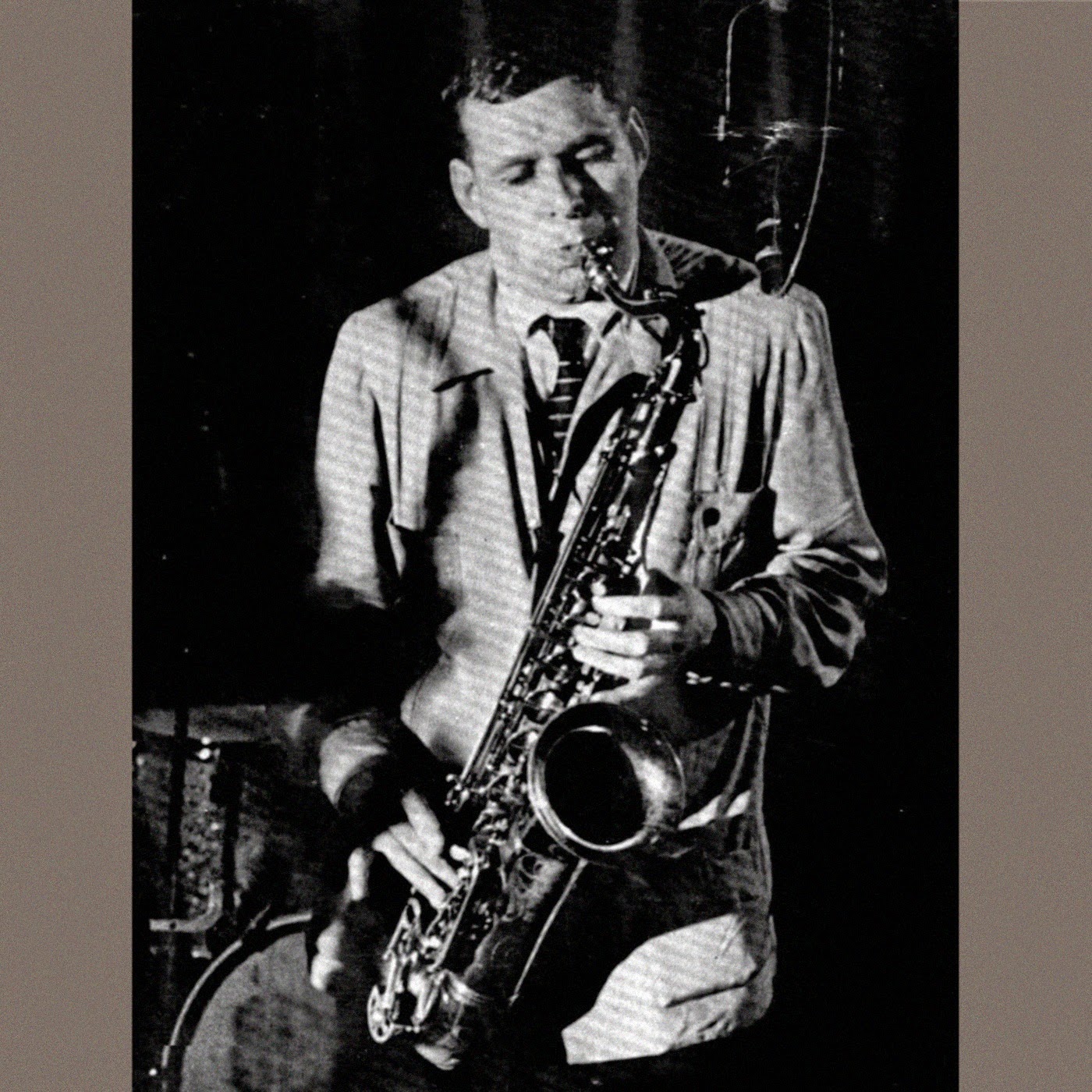 This band features on the Spotlite Records’ album The Don Rendell 4 & 5 plus the Don Rendell-Ian Carr Quintet.  The band recorded the sides for American Hank Russell, Howard Keel’s musical director, in ‘64.  Russell and Don were Jehovah’s Witnesses and Don describes it as ‘a friendship thing.”  Russell hoped to secure a release in the States but nothing came of it.  Backed with three tracks from the group’s appearance at the Antibes Jazz Festival in 1968, it reveals an already fine mature group but the contrast with the Antibes tracks is enormous.  When Shades of Blue came out in ’64, Colin Purbrook was on piano and the band had moved on artistically.  Where the Russell record draws heavily on the Great American Songbook, Shades of Blue focuses on original compositions.

Dave Green feels the early quintet was ‘very based on the Miles’ thing’.  “We were trying to emulate these great players,” he laughs.  “I was trying to do a Paul Chambers and Trevor was trying to do a Jimmy Cobb.  John was influenced by Wynton Kelly but as time went on the band really matured a lot.”  For Dave, Michael Garrick’s arrival later in ’64 signalled the change.  “We started utilising a lot of Indian type compositions Michael used to write and the whole band became really strong after Michael joined.”  Ian feels there was something uniquely poetic about the group’s music.  “I think that was one of the reasons people liked it so much.  It wasn’t hard-driving like a lot of American Jazz of the time.  We had different kind of focuses than the Americans.  We were into texture and different rhythms.  And Michael Garrick was steeped in Indian Music as well.  We found we could do so many things that we never thought of before.”
Michael Garrick echoed this when we spoke last year.  It was about one’s own roots.  As he said then, “Whether we like it or not we’re English and I wasn’t born in Chicago or New Orleans but in Enfield,” he said.  The recent release of The Rendell/Carr Quintet Live in London (Harkit HRKCD8045) shows how fast they were developing.   Their compositions leapt from the group’s shared identity.  There was no policy decision to feature original material, as Don explained, “It was quite brave in a way because we had so many originals with Michael, Ian and me writing.  Suddenly we’d gone a whole concert without using a standard.  It just happened.” 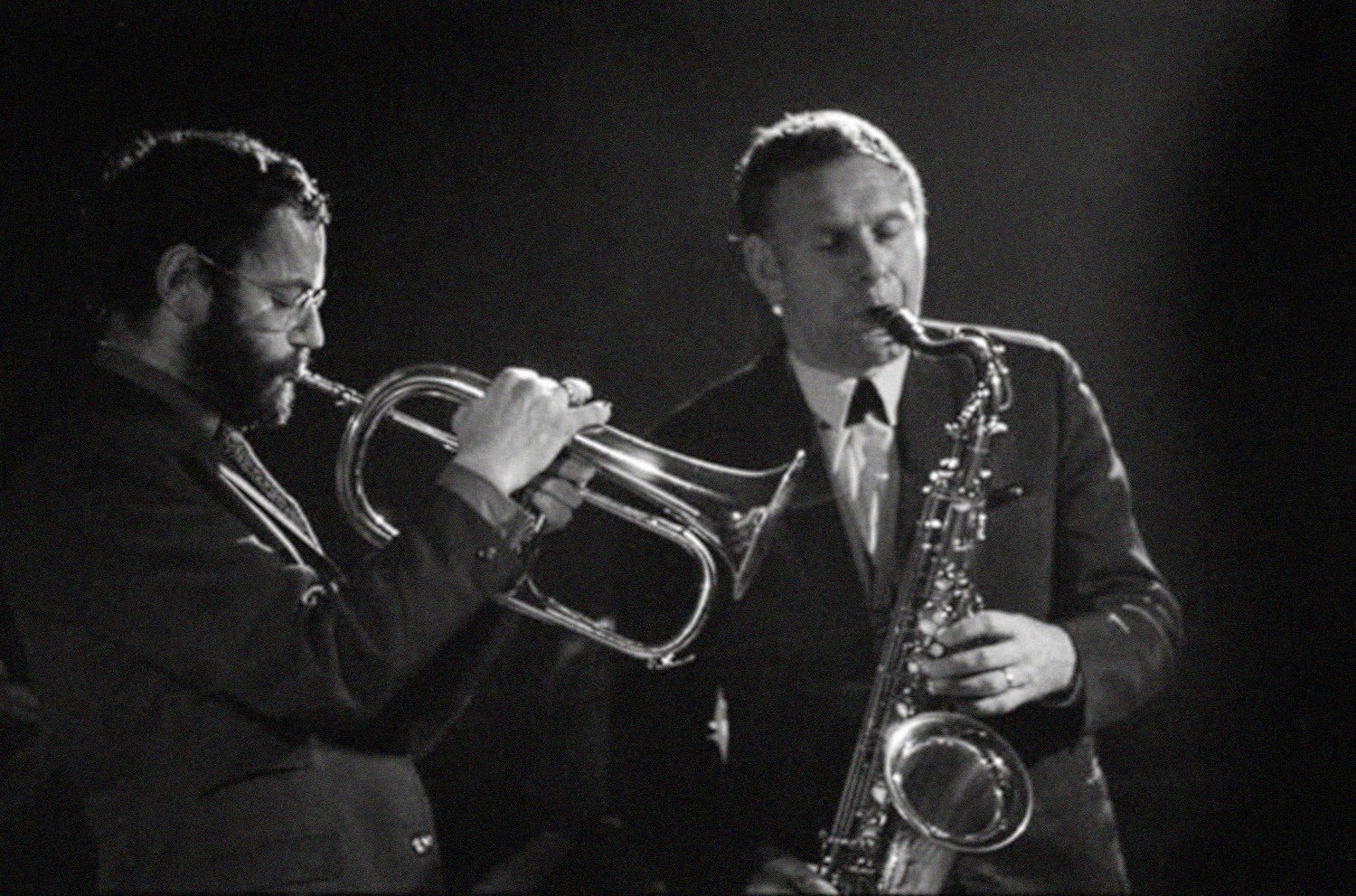 However, as Trevor Tomkins explains, it soon became a question of principle. “We did a BBC Jazz Club broadcast and wanted to do all original stuff.  There was quite a heated discussion because they said, ‘Can’t you throw in a few American Standards?’  We insisted and I think we were the first band they had do a set of totally original music.  At gigs we’d get requests for original material.”  With Warren Mitchell and Sam Wannamaker amongst their fans, ‘the Five’ attracted ‘a nice class of audience’.  There’s a wonderful group atmosphere that comes across on “Live” and the Harkit recording – it’s Warren Mitchell’s ‘ribald comments’ you can hear on “Live”.  This is a band doing it, as Don says, because they love it.
Dave Green recalls, “We always used to travel and room together.  Somehow we got the gear in Trevor’s Vauxhall and we all piled in.  It was so exciting.  I was absolutely thrilled to be with that band.”  And as Trevor Tomkins points out, it was clearly a group, not two great horn players plus rhythm.  He told me recently, “That was really my schooling.  All of us contributed in lots of different ways.  It was a group effort.  If Ian came in with a new composition it wasn’t, ‘this is how it’s got to be done.’  It would be ideas and experimenting with things and almost letting it grow naturally.”
Perhaps Dusk Fire is their most popular record and backed with Shades of Blue it makes of a hell of a package.  But Phase III/“Live” reveals a developing band.  As Don points out Phase III saw changes in Ian’s writing.  “Ones like Crazy Jane and Les Neiges D’Antan were approaching Free Music, no time with no harmonic structure, (while) I’d always written time and harmonic structure.”  With Garrick stretching the group with his Indian-influenced pieces and Don’s ‘Coltrane out of Lester Young’ approach, the Quintet could go in any of a number of directions and frequently did.
And they worked regularly.  “We played a lot of Poetry & Jazz, mainly through Michael Garrick,” Don remembers.  “The poets were normally the same ones – Vernon Scannell, John Smith, Danny Abse and Jeremy Robson.  There were tours.  The northern tour took in Liverpool, Stoke, Leicester, Coventry and Ian coming from Newcastle fixed us to play there a few times.”  But apart from Antibes and Montreux, they never played in Europe and despite Ian’s best efforts a US trip never materialised.  However, a Poetry & Jazz concert for the BBC with Vernon Scannell (Epithets of War) got them on TV and they also did a BBC2 documentary.  Mike Dibbs, who did Ian’s Miles’ programme for Channel Four, was the producer.  Dave Green tells me, “He filmed us at the Phoenix on Cavendish Square and as I was getting married on March 1st ’68, he tied the wedding into the filming.  Mike had previously written this piece called Wedding Hymn so it ended up with the band playing it in the church filmed by the BBC.  It was extraordinary.”
In 1967, Ian’s wife Margaret had died shortly after giving birth to their daughter by Caesarean.  That’s her on the cover of Shades.  That night he rang Trevor who came over immediately, so Ian wouldn’t be alone.  “Some people think that’s why I put so much of myself into music and, in a way, music was my salvation,” Ian explains.  Perhaps that shows itself most in his contributions to Phase III and “Live” but by ’69, somehow the steam was going out.
Ghanaian percussionist Guy Warren had begun playing gigs with the group at Ian’s behest but, as Dave points out, this ‘didn’t meet with everybody’s approval’.  For Dave, ‘Things started to unravel for no particular reason I can remember.  Ian started getting quite frustrated.  I think he wanted it to go in a slightly different direction and Michael had his own ideas.”  Ian left at a gig in Camberley in ’69.  “Maybe I was just jaded,” he says now.  “I just went home and didn’t communicate with anybody for a few days.  I just felt the band was over.”

Nucleus would follow and Jazz-Rock certainly wouldn’t have sat easily with either Don or Michael.  For Michael, the whole Pop/Rock thing had little to do with the Jazz he loved.  For Don, it was a question of different priorities.  “Ian wanted his own band which was a different kind of music from what we’d been doing.  I didn’t have the Jazz Music commercial ambition that Ian had.  As a believing Christian I just didn’t want to do a month’s tour of the States or that kind of thing.  I’m a family man, I guess.”  With hindsight, Change Is tries to contain too many potentialities at one time.  The very thing that had made the group great – its breadth, its bravery, its quiet bravado – were its inner contradictions that eventually destroyed it.

Looking at the scene then and now, both Don and Trevor express concern at the  ‘chops for chops’ sake’ attitude they see in some young players, though both feel that most young players have now moved on from that.  As Dave Green suggests, “You can’t really compare one particular period with another.  Things that weren’t happening then are happening now and vice versa.”

Editor’s Note: This article first appeared in Jazz UK in the July/August 2004 issue.

With minor changes, the text is adapted to the needs of this post.
See original:
http://www.jazzinternationale.com/540/