THE MODERN JAZZ QUARTET – Under The Jasmin Tree (LP-1969) 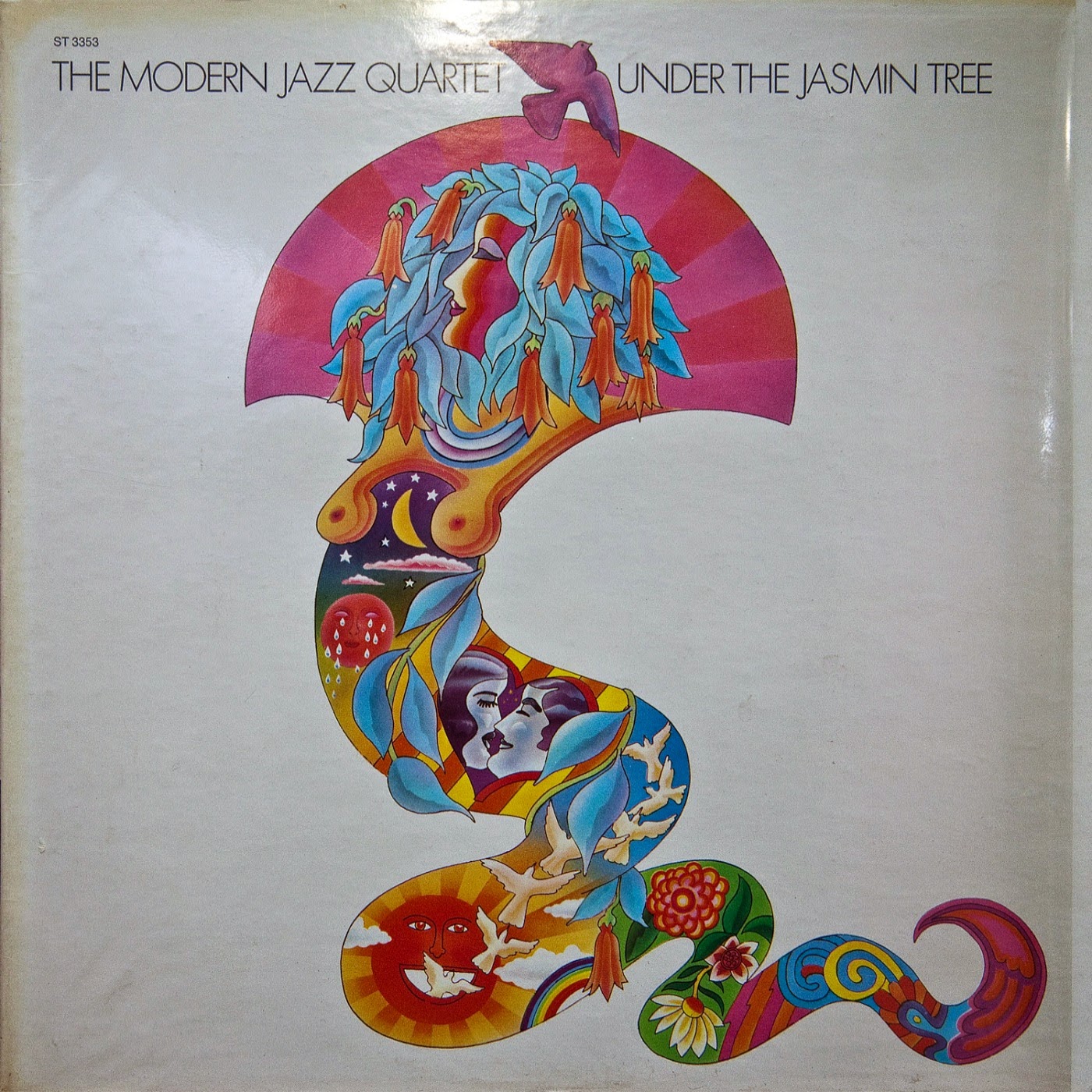 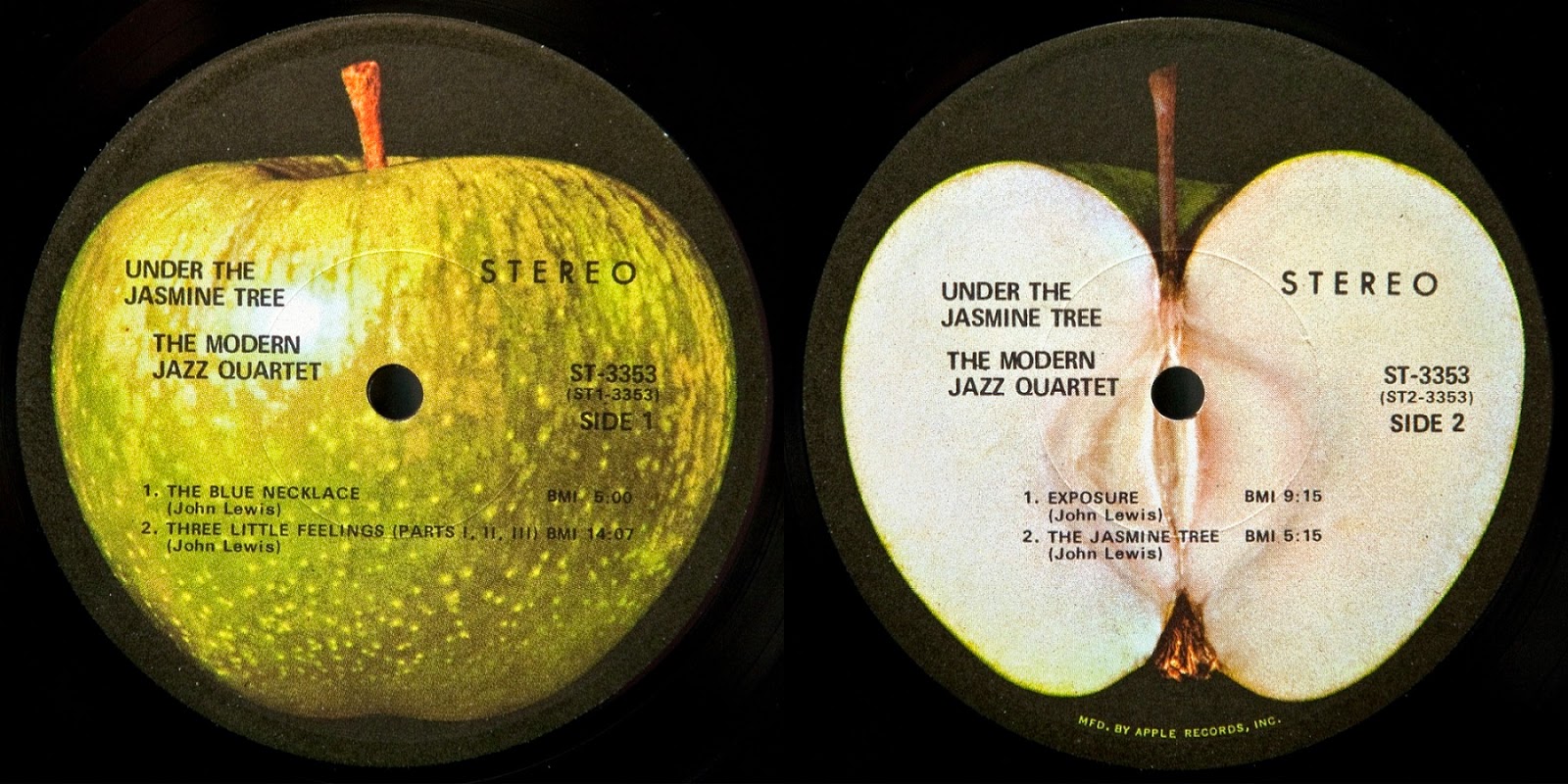 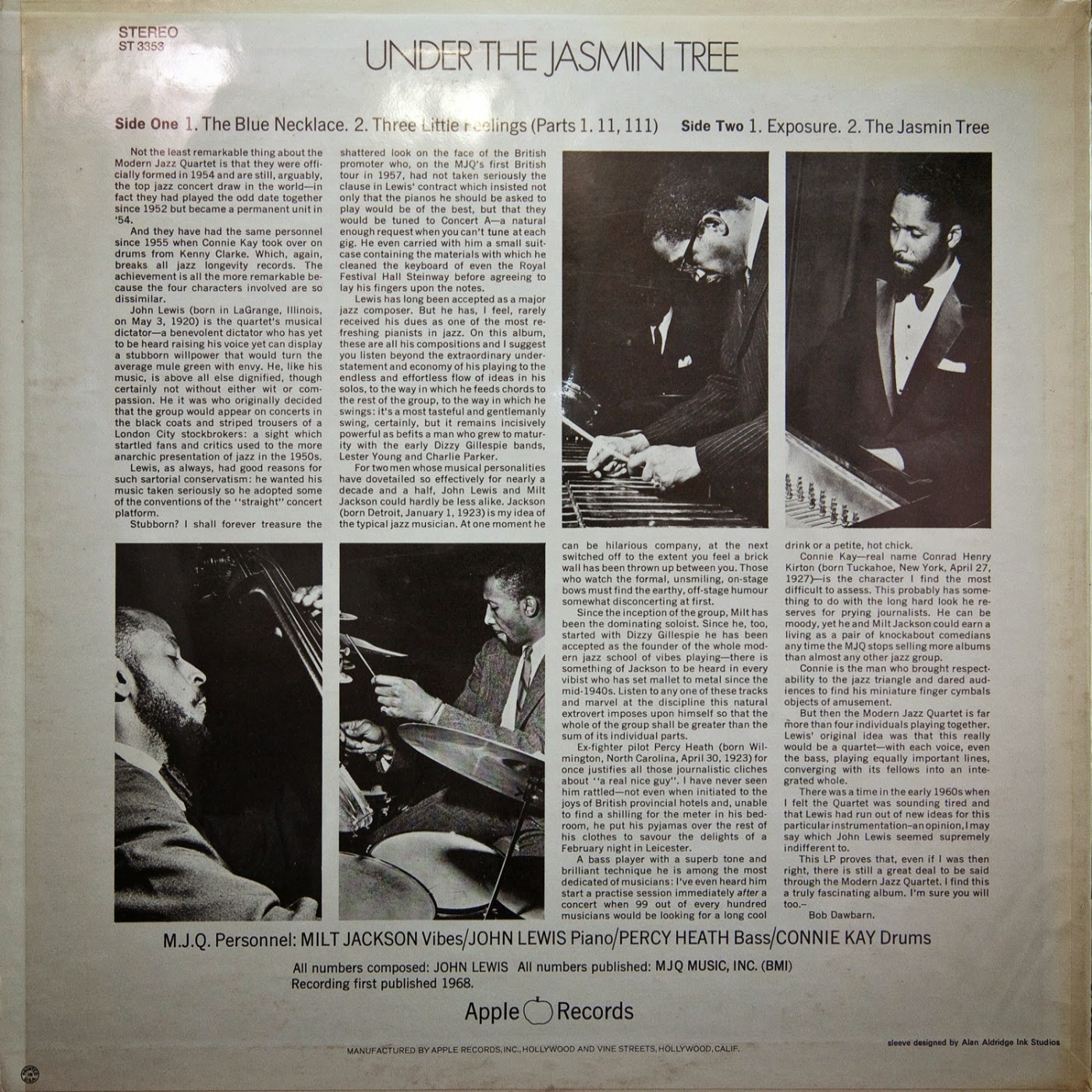 The Modern Jazz Quartet comprised John Lewis (piano), Milt Jackson (vibraphone), Percy Heath (bass) and Connie Kay (drums). The group’s origins went way back, to just after World War II when its founding musicians first came together under the tutelage of bebop pioneer Dizzy Gillespie. By 1960, as The Beatles emerged from the skiffle chrysalis that had been The Quarrymen, the MJQ had been established nearly 10 years, and its members had been playing together (in Gillespie's band and then in their own) for nearly fifteen. As the Sixties began, the MJQ remained hot property and at home in America enjoyed a popularity that was only rivalled, in concert appearances and album sales, by Dave Brubeck and Miles Davis. 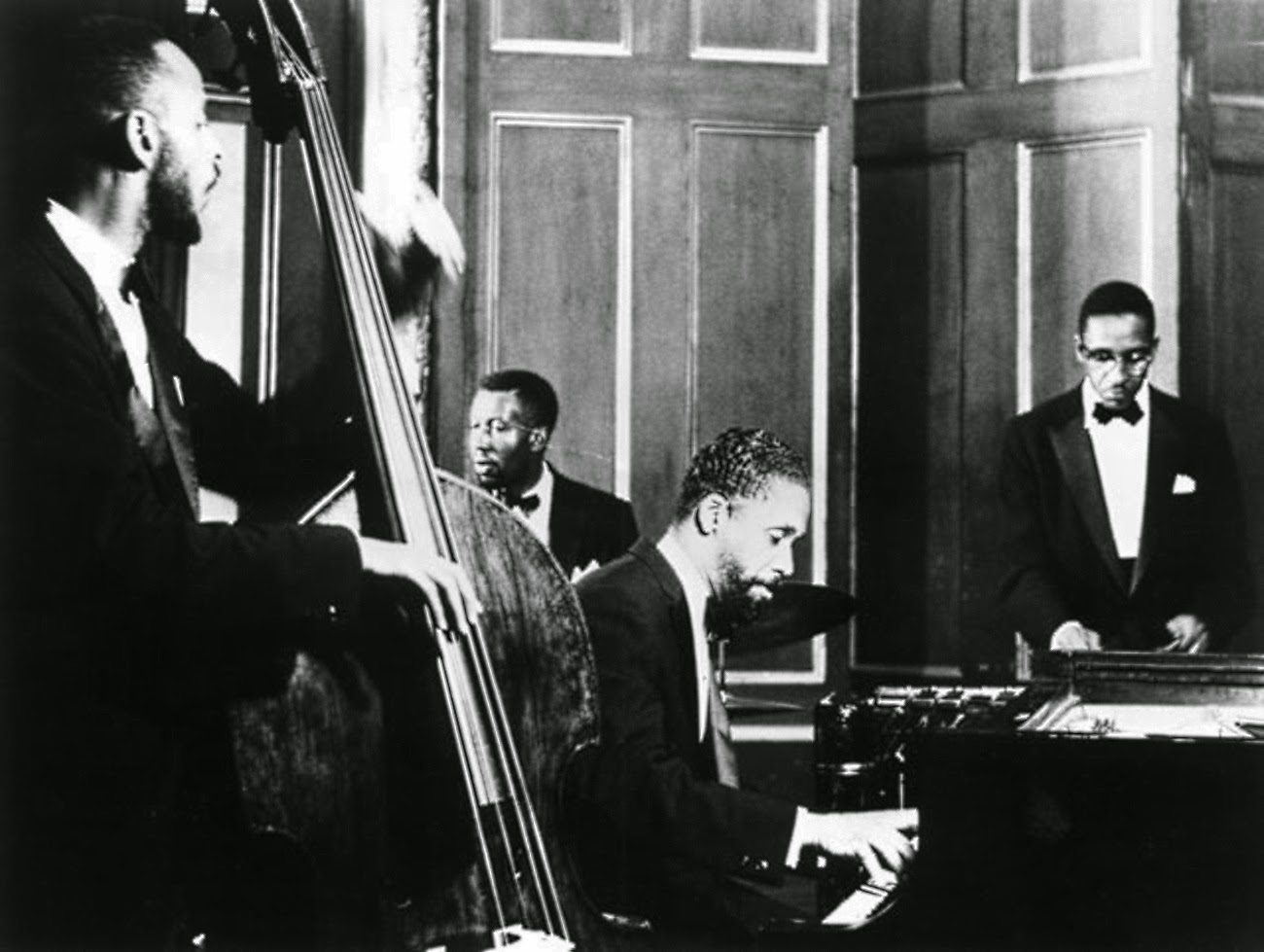 Almost a decade further on from that and the world of the MJQ collided, beautifully and briefly, with that of The Beatles. One quartet consisted of super cool jazz improvisers, the other boundary-breaking pop polymaths.

Before they separated, the MJQ clocked up 22 years together, an unprecedented timespan for an original four-piece, of any genre. The split came in 1974, after the memorable Last Concert at the Lincoln Centre in New York City. But the group reconvened in 1981 and issued its final recording in 1993.

Album "The Jasmin Tree" was originally released in 1968, followed by "Space" in 1969. Both shine brightly in the Quartet's extensive catalogue, not just for their brilliantly understated melodic statements, their fluid, organic jazz, but for the era-defining psychedelic artwork that adorned their sleeves, and the fact that they appeared on Apple. The vast majority of the MJQ’s albums appeared under the aegis of the US music industry giant and jazz trailblazer that was Atlantic Records.

Although The Beatles once famously sang that they had no kick against modern jazz, they couldn’t honestly claim to be responsible for bringing about the MJQ's two-album secondment to Apple. In fact, the instigator of this short but happy union was the first Head of Apple Records, the fondly remembered Ron Kass. Ron was the seasoned American record company professional head-hunted from Liberty Records. He was also the biggest jazz fan at Apple’s HQ, 3 Savile Row in London. "I loved Ron, he was exactly what we needed,” recalls Peter Asher, Apple's Head of A&R at the time. “He was knowledgeable, he knew the state of the business. He had the smooth American suit-and-tie thing going, which was what we thought Apple had to have in order to interface with the business world and the Capitol (EMI) world. We liked him, he understood us.”

Peter continues: "The Modern Jazz Quartet came to Apple because Ron Kass was very friendly with Monte Kay, their manager. And Ron said, ‘Wouldn't it be cool for the MJQ to do an album on Apple?’ Ron's pitch was that it would make them a lot of new fans, as some Beatles fans would listen to the MJQ just because it was on Apple, and Monte really liked the idea...." 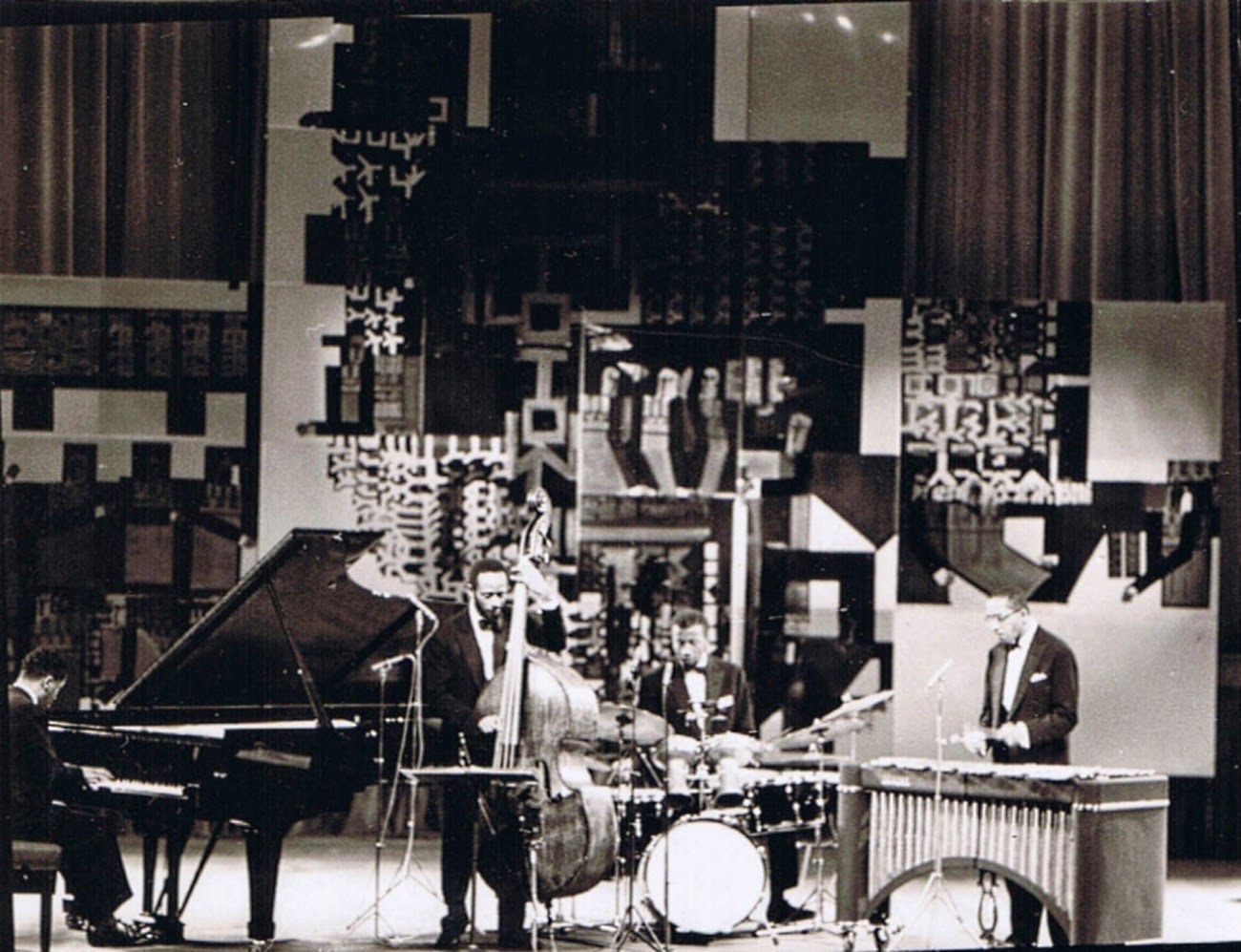 A more unlikely match of artists and label you will rarely find -- the dignified, classically influenced, indelibly Afro-American Modern Jazz Quartet and the Beatles' Apple Corps, Ltd. But Apple in its Rocking '60s heyday was one of the most daringly eclectic labels on the scene, and as the sole jazz act on the roster, the MJQ was given complete artistic freedom, with no electric guitars or period psychedelia apart from the misleading cover art. The program is more or less standard, poised, painstakingly structured, gently swinging MJQ fare, the group's contrapuntal interplay as telepathic as ever. The most distinctive of John Lewis' compositions is the revolving minor-key theme of "Three Little Feelings, Pt. 1" (part of a three-movement suite), while "The Blue Necklace" has a bell going off like that of a cash register, and Milt Jackson is clearly in his element on the gospel-ish "The Jasmin Tree." An extremely rare LP even when it was in print -- the Beatles' rock audience ignored it, and MJQ's fans couldn't find it.
_ Review by Richard S. Ginell