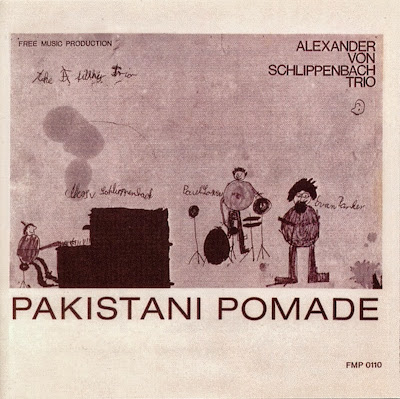 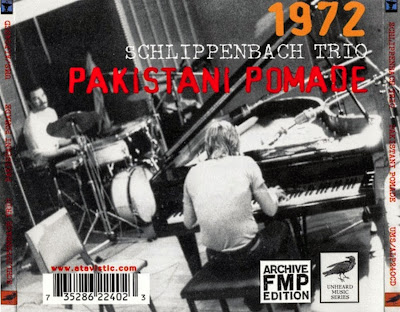 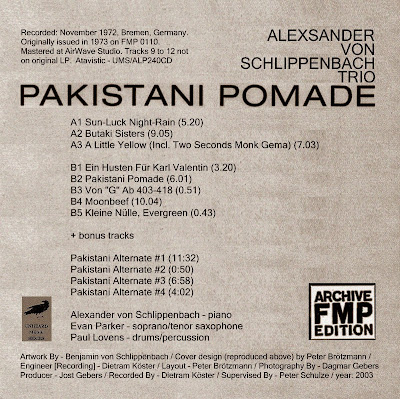 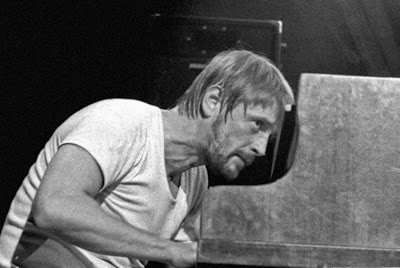 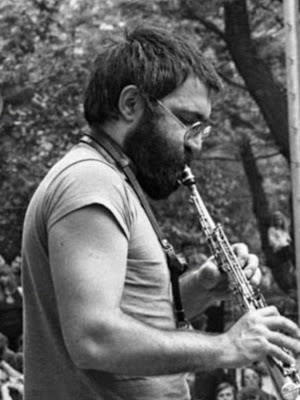 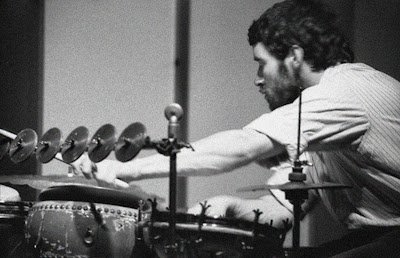 One of the truly legendary recordings from the early period of European free improvisation, and the opening statement from a band that – improbably – continues to exist, 1972’s Pakistani Pomade is essential music. The three players heard here on their maiden recording voyage – pianist/leader Alexander von Schlippenbach, saxophonist Evan Parker, and percussionist Paul Lovens – met through the activities of the important Globe Unity Orchestra, a roving collective wherein all the future luminaries of European free music first began to associate in the late 1960s (Atavistic has issued some early recordings, and there are some beauties still available on FMP). But beginning with this session, they have gone on to stake out their own patch of the music; and with over 10 recordings (some of which are currently available, though hopefully Atavistic will get around to reissuing beauties like Anticlockwise and The Hidden Peak) and several decades of work together, this trio now seems like one of the central workshops for each player’s individual and group music.

Schlippenbach, for example, has really benefited from this continuous improvisational vehicle. Though he works in occasionally quite aggressive areas – making uses of clustered chords and very fast fractured runs of notes – it would be misleading to say he’s more than customarily influenced by American players like Cecil Taylor. The space and formal sense in his playing is probably more akin to pianists like Ran Blake or Paul Bley who, though they don’t actually come through in the sound of Schlippenbach’s playing, were probably formative influences on his approach to the music (along with his avowed love for bop players Thelonious Monk and Herbie Nichols). Listen to the opening dialogues with Lovens on "Sun-Luck Night-Rain" or to the killer title track for evidence. Parker’s relationship to jazz saxophone – his early inspiration in Rollins and late period Trane, from which he subsequently launched his playing into the harmonic and textural stratosphere – is fairly familiar. On this recording he combines the delightfully quirky pops and burbles for which he is renowned with a harsher, more shriek-filled voice that is less well-documented. It’s still defined by the same concerns – duration, tonal micro-management, overtones, and false fingerings – but represents a side of his playing that Parker has largely left behind. Lovens, a superbly gifted colorist, has the incredible talent for combining the sheer momentum of classic jazz rhythms with little to no overt reference to them, filling the tone field with thuds, scrapes, rustles, and thwacks that create their own rhythmic syntax. Listen to his superb duet with Parker, which opens "Butaki Sisters." "Ein Husten für Karl Valentin" and the multiple miniatures on this recording tend to be very sparse and pointillistic, showcasing the range these fellows had even early on. As if the reissue alone weren’t glorious enough, there are four "Pakistani Alternates" which comprise an extra 20 minutes of heady listening. Rawer and more edgy than their later recordings, Pakistani Pomade is still defined by the listening and generosity of these players.
A must have recording.