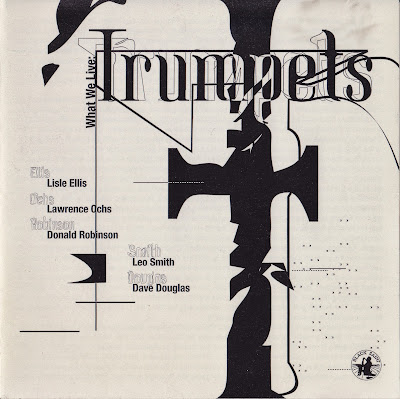 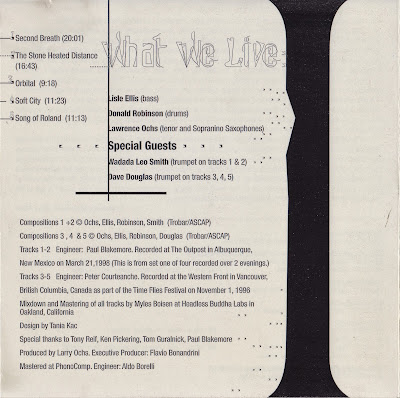 Trumpets, is the latest from “ What We Live ” and features trumpeter Wadada Leo Smith performing with the trio of saxophonist Larry Ochs, bassist Lisle Ellis and drummer Donald Robinson during a live date recorded in Albuquerque, New Mexico. Whereas trumpeter Dave Douglas – who has been lighting up the jazz world these days with a string of dazzling recordings, joins the band on tracks culled from a live set recorded in Vancouver, British Columbia Canada.

The core constituents of “ What We Live ” : Ochs, Ellis and Robinson frequently collaborate with other artists yet the bottom line or overall chemistry indicates that this band is an – improvising/modern music/jazz machine – of the highest order. On the composition, “ Second Breath ” , drummer Donald Robinson commences the proceedings with a series of melodic tom-tom fills and articulations, as Ochs’ corpulent tenor sax tone and fleet fingered phrasing along with Smith’s brawny and brassy lines initiate a rite of passage or perhaps an opening of the floodgates.... An air of exotic mysticism prevails or perhaps some semblance of a tribal ritual is unveiling as the Quartet ruminate through various phases and motifs along with a substantial amount of engaging dialogue and interplay. We hear quiet or subdued dynamics on “ The Stone Heated Dance ” , while Smith utilizes his mute which segues into a series of extended movements and an altogether brilliant exposition by bassist Lisle Ellis as the tempo picks up steam and the band pursue extroverted and authoritative choruses.

Dave Douglas provides a contrasting alternative to Smith as the listener is afforded the opportunity to hear two gifted trumpeters who respectively possess distinctive styles and techniques. With, “ Orbital ” , Douglas is a buzzsaw as the band partakes in a moderate swing motif along with shifting meter and rapid movement. Here Douglas and Ochs performing on tenor sax engage in passionate dialogue as they occasionally cavort while deriving inspiration from one another as Robinson and Ellis execute the rhythms with all the discipline of a small militia who have just received their battle plan. Robinson’s expert brushwork behind the kit surfaces on the delicate burner titled, “ Soft City ” as Ochs’ fervid and piquant phrasing on “ Song of Roland ” is a thing of beauty. Again, the saxophonist and Douglas speak loud and clear via festive exchanges while embarking on a sinuous path as the story continues to unfold!

The Trumpets shall boldly pronounce the advent of a new and seemingly eventful year in jazz as “ What We Live ” continue to astound and render intelligible music that defies any rigid sense of categorization. Recommended.