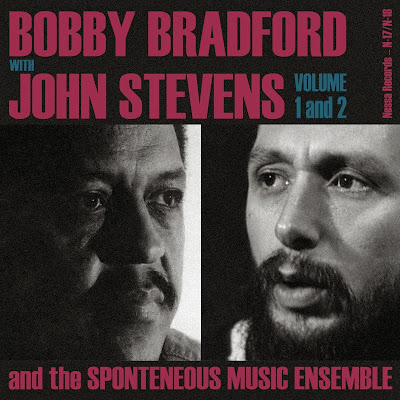 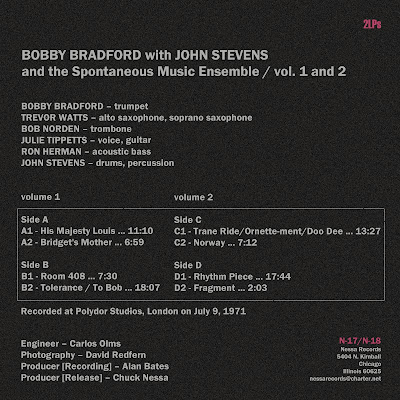 Note:
This is not a double CD reissued in 2009, this ripping is made directly from old vinyl records from 1980 / 81st. A few years ago, my four-year son, tore is the original packing, so I made a new cover and since then as a double LP, these two albums is situated in my collection of vinyl records.

Review:
In the instances that European and American improvisers have commingled and produced concerts and recordings, especially in the halcyon days of European free improvisation (the 1970s), a significant number of these situations resulted from expatriation. And it's certainly true that in many cases, American-born improvisers could have done better financially being based in Europe—after all, this music has a track record of greater appreciation across the pond, especially on the continent.

England was a bit stodgier in its cultural perception of the new music; perhaps that has had something to do with its vitality (both historic and current). In July 1971, trumpeter Bobby Bradford—a sometime associate of saxophonist Ornette Coleman who worked with clarinetist-composer John Carter in Los Angeles—visited the UK while on holiday. A brief visit, it resulted in contacts with writer Richard Williams, drummer John Stevens and Alan Bates' Freedom label. Long a family man, Bradford eschewed promises of more work in New York and overseas for a fruitful, if quieter, life in Southern California, where he is today.

The present set captures Bradford and Stevens' Spontaneous Music Ensemble (SME), recorded at Polydor studios. Alongside Stevens are regular conscripts, saxophonist Trevor Watts, bassist Yaron Herman and vocalist/guitarist Julie Tippetts; expatriate American trombonist Bob Norden also appears here. Though enough material was recorded for two albums, the complete version didn't appear until the early 1980s, when the tapes were purchased by Nessa Records (then based in Chicago). The 1970-1971 edition of the SME hasn't been significantly documented on record, so these albums with Bradford are doubly interesting.

At the time, Stevens was exploring structures that would allow people with a wide range of musical abilities to participate, such as "click pieces," "sustain pieces," and "rhythm pieces." Such work is represented on LPs like the self-titled SME Polydor LP (1969), Birds of a Feather (BYG, 1970), One Two Albert Ayler (Affinity, 1971) and For You to Share (A Records/Emanem, 1970). It was this edition of the SME that, in fact, kick-started the interests of Emanem Records founder Martin Davidson: "I came to terms with [free improvisation] in 1971. I had heard it starting in the mid-1960s, but could not relate to it. A 1971 concert by the Spontaneous Music Ensemble (with John Stevens, Trevor Watts, Julie Tippetts and Ron Herman) turned me on."

"Norway" and "Rhythm Piece," both on the second LP, exemplify some of the work that this edition of the SME was exploring. The way that the SME approached rhythm in this context had a lot to do with space and impulse. For the rhythm piece, Stevens is heard on a pared down kit, with brushes and knitting needles on snare, a small floor tom, hi-hat and ride cymbal. His approach is akin to Sunny Murray's work with saxophonist Albert Ayler, a constant active presence in free accent; he also uses his voice to elicit non-linear wailing lines. Stevens' playing is perhaps clearer and more detail-oriented than Murray's and is certainly less wave-driven. Herman sketches in pizzicato, his plucks and strums paralleling Stevens' constant movement and the wordless shouts, gasps, clicks and unbridled shrieks of Tippetts, who plays a muted acoustic guitar purely as off-kilter accompaniment. The horns are absent on "Rhythm Piece," allowing the delicate interaction between the three to remain front and center. "Norway" features long tones from voice, trumpet, trombone and soprano in a balladic form, somewhere between the Scottish Highlands and wide-vibrato Cleveland wail. Rattling bells and a single bass chord act as a platform, while tones fall in and out of phase with one another and elide into sharper dialogues.

But if one considers European free improvisation as a defined, emancipated structure free from the influence of American art, the SME would be a round peg in a square hole. An interest in the music of Ayler and Ornette Coleman was central to the aesthetic behind Stevens' work, and early incarnations of the group featured non-chordal, melodic improvisation and interaction that likewise stemmed from boppish themes. Titles like "2B Ornette," "Higgins," and the aforementioned "One, Two Albert Ayler" take a rightful place in the discography, as do "Ornette-ment" and "Trane Ride" represented here. Clearly the connection with free jazz's originators was one reason why the fruits sound so fresh.

Three of Bradford's compositions, plus a lengthy Stevens free suite. "His Majesty Louis" starts off the vinyl, free-time collective calls mated to a bluesy rondo not dissimilar to Coleman's "Congeniality." The Stevens-Herman rhythm section has clearly learned from listening to such bass/drums teams as Charlie Haden/Ed Blackwell, David Izenzon/Charles Moffett and Jimmy Garrison/Beaver Harris (the latter sets had visited the UK with Coleman and saxophonist Archie Shepp in the late 1960s). As the three-man front line is a field of commentary—incisive, vocal cries from Watts' alto, Norden's slushy tailgate and Bradford's cutting, stately horn—bass and drums ebb from loose, jovial swing to net-less freedom. Three minutes in, one might be hard pressed to think that the alto and rhythm are anything other than Ornette, Haden, and drummer Billy Higgins.

That isn't to say that the SME are derivative; rather, honoring forebears while at the same time taking free improvisation into new areas is an approach that Stevens' group so beautifully executes. Syrupy blues and back-alley hollers hark back to traditional modalities, while flitting rhythms and tart dissonance are distinctly modern. "Room 408" is more searing, its theme a series of planar rises, a collective improvisation driven by reedy brays and cutting brass, towards a sublimely immediate trio of bass, trombone and trumpet midway through.

"Bridget's Mother" is a piece for trumpet, alto and voice and is more closely-aligned with the SME works on the first LP, with Bradford's steely, fat lines and the liquid cries from Watts' alto triangulating toward Tippetts' soaring cries and broad, impulsive leaps. Rhythmic motives are introduced but soon fall away to bubbling dialogues and long, seeking tones. As a vocal improviser, Tippetts is extraordinary, often in perfect unison with the alto and able to coax a saxophone-like vibrato from her throat.

Stevens, Watts and Bradford would work together again in 1973 on Love's Dream (Emanem, with Kent Carter on bass), the album a result of a tour that took the quartet through England, Holland, Belgium and France. Though a short-lived collaboration, clearly the resulting Stevens-Bradford music was something special for all involved.