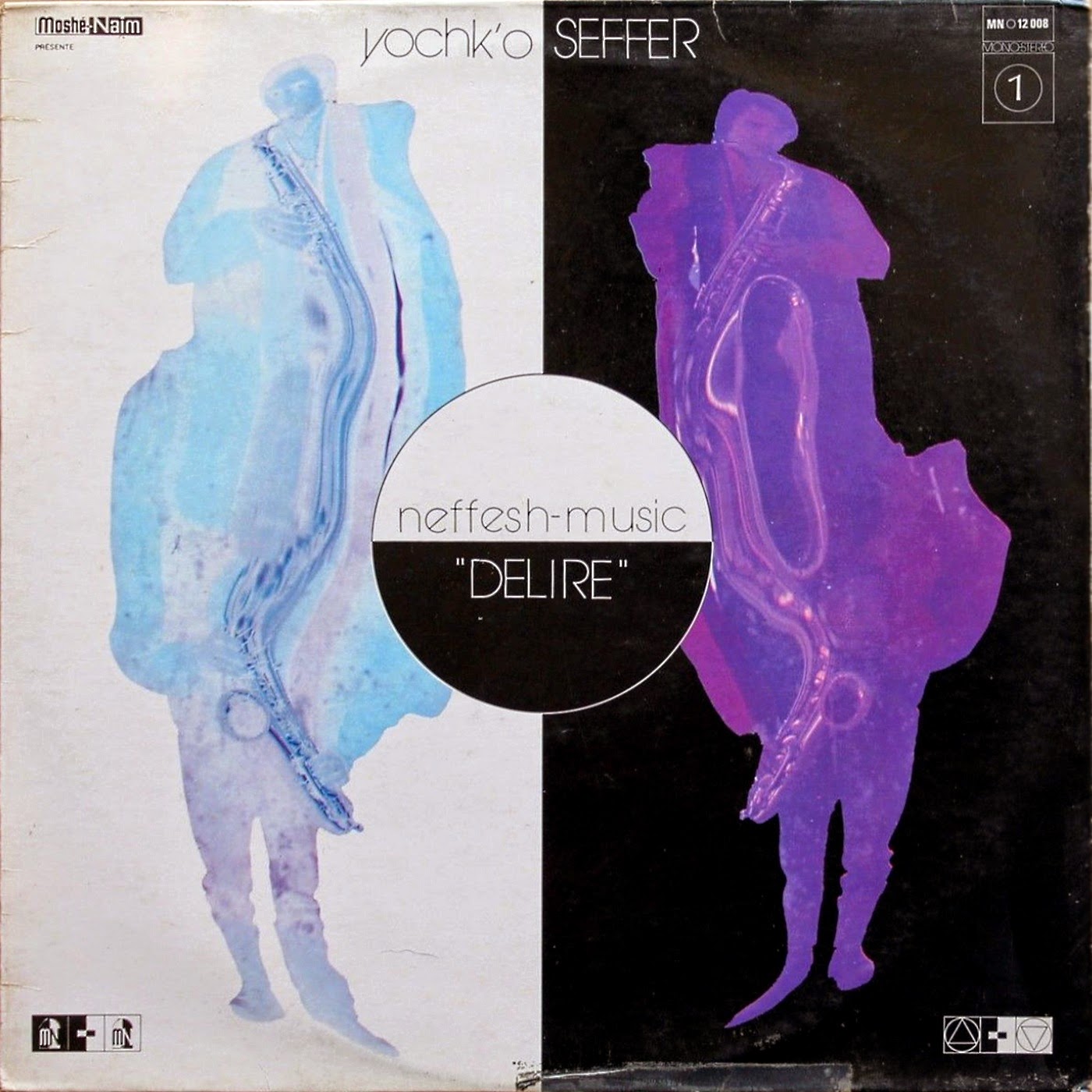 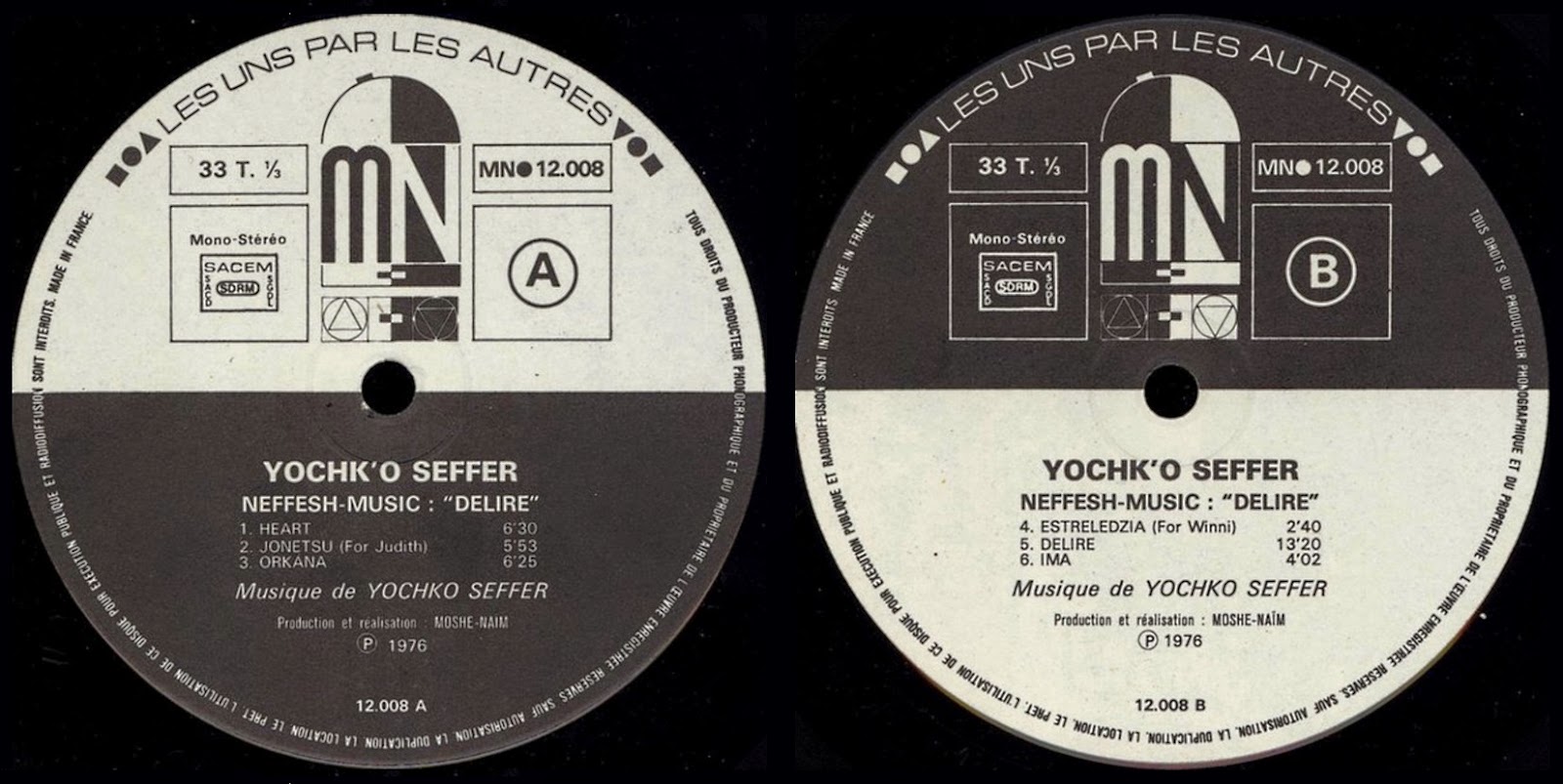 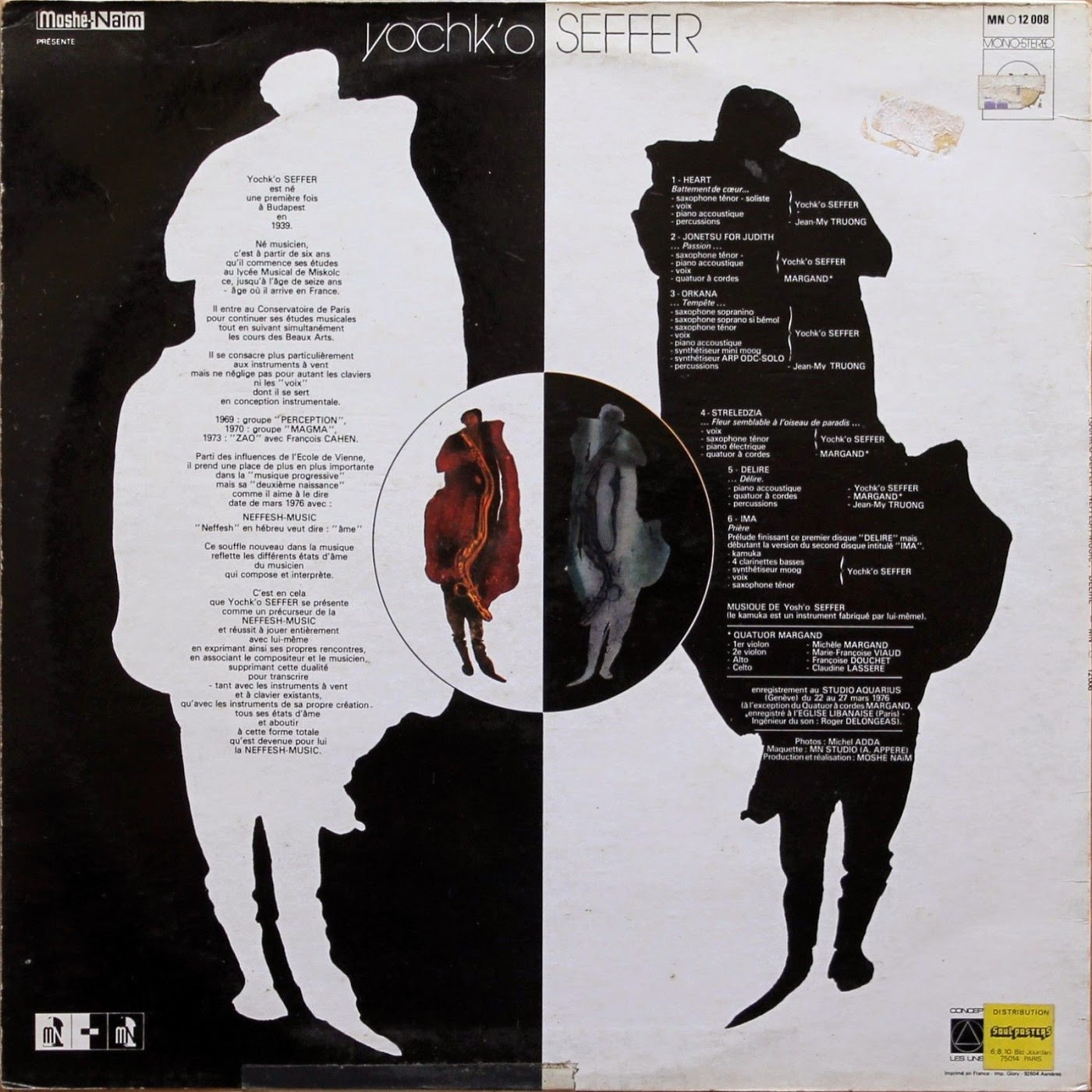 * The 'Kamuka' is an instrument designed and built by Yoshk'o Seffer. 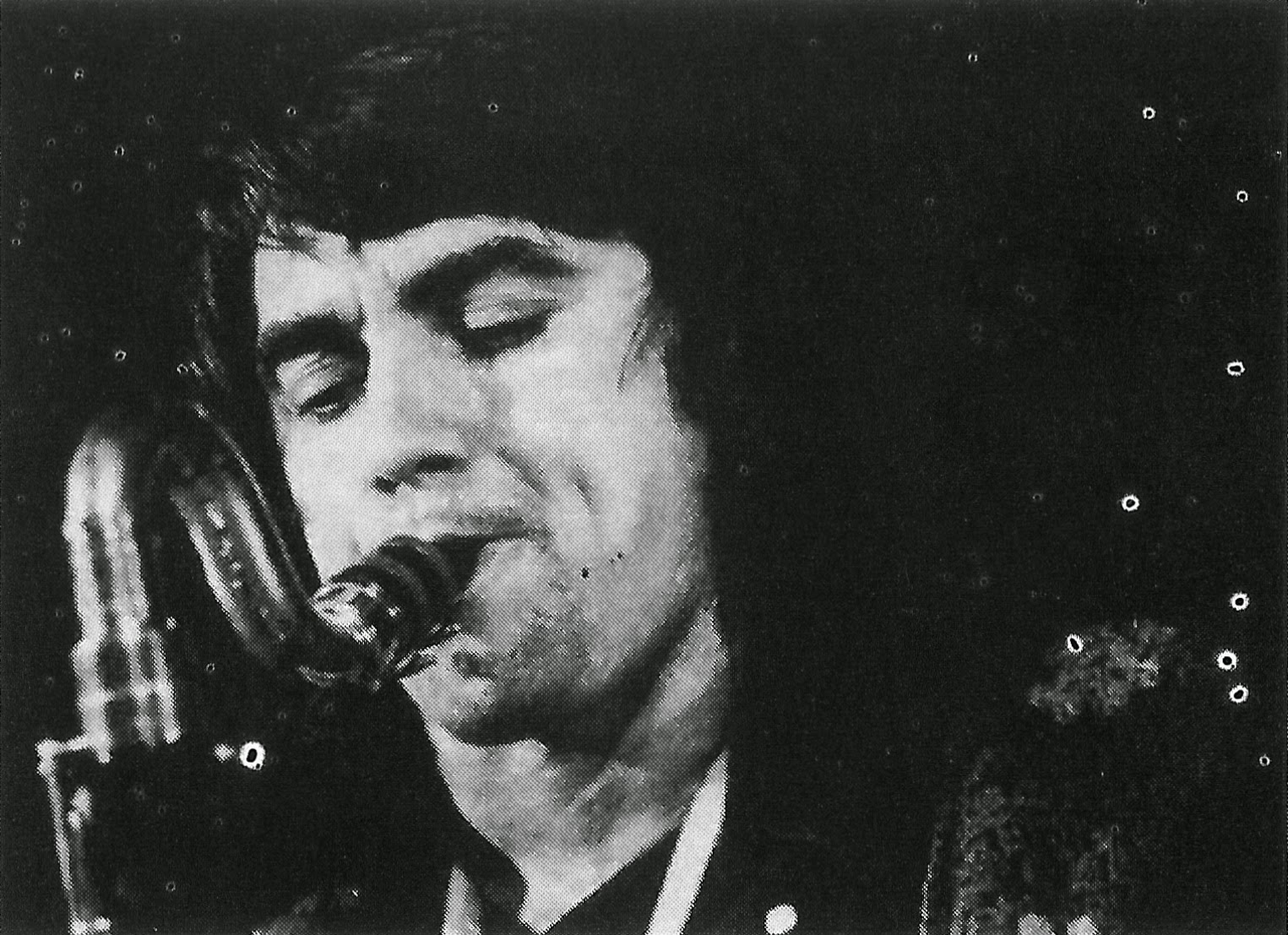 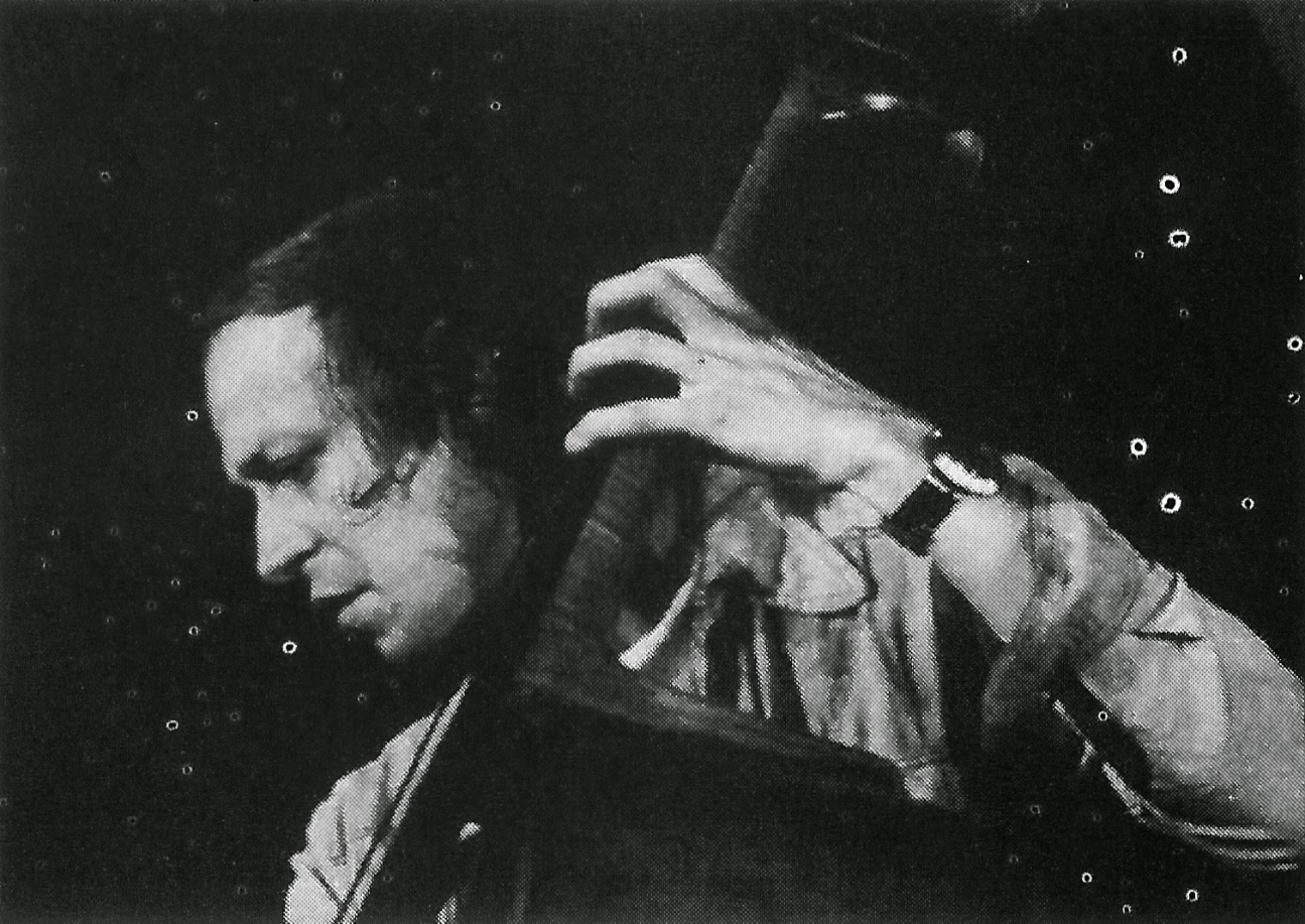 Although Delire was not Hungarian-born Parisian multi-instrumentalist Yochk'o Seffer's first solo album, it was nonetheless the first from his project Neffesh Music (music of the soul), consisting of him as the composer and the instrumentalist along with a revolving cast of other musicians. On this album he's backed by fellow Zao cohort Jean-My Truong on drums as well as a string quartet led by Michele Margand, who also were members of Zao at the time when this album was recorded (March 1976). All other instruments are played by Yochk'o.

What sets this album apart from his previous work with Zao, as well as his future Neffesh Music projects, was the lack of electric bassist. Therefore, this album includes less fusion/jazz-rock tinge, the dominant presence of acoustic piano and strings along with saxophones clearly hints at an avant-garde chamber rock sound reminiscent of Univers Zero, Henry Cow or possibly even late sixties Frank Zappa. Even within Seffer's varied discography this album is sonically unique, but unfortunately it's overlooked in favor of his other recordings, including Ghilgoul. Nowadays one can hope to buy this record via Ebay and this can incur more-than-average expenses for one vinyl copy. It's that rare!

"Heart" opens with a staccato piano-drums-sax riff, followed by ominous and rigid strings, the atmosphere is very tense and almost Stravinsky like. The main melodic theme is established after a minute with tenor sax carrying the melody, including a bassline that sounds like rendered on fuzz-bass, but is more likely a distorted bass synth that sounds heavy and sinister nonetheless. The same theme is then repeated on strings and Seffer's unique falsetto vocalize. Halfway in the piece switches to a funky drum break backing a tenor sax solo, with interjections from synth and piano.

"Jonetsu For Judith" ("jonetsu" is Japanese for "passion") starts with lush string arrangements and beautiful chord progression, as the prominent tenor sax solos over the chords with passionate agitation. Layers like piano, synthesizer and even overdubbed harmony vocals are added. The piece moves through some tense and dissonant chords that are contrasted by freeform tenor sax. The piece concludes with a moderately fast tempo carried by strings aided with synth bass and some percussion and Seffer's tenor sax gets more intense until the piece stops.

"Orkana" begins with a rubato synthesizer solo backed by sparse piano. First hint at the main melodic themes comes with overdubbed saxophones (sopranino, soprano and tenor). Drums and piano then come in and the same theme gets a beat-heavy basis, with Seffer adding vocalize to the mix as well. This is clearly the most Henry Cowish track on the entire album, as the interplay between drums and piano is pure kinetic chamber rock bliss, with overdubbed saxophones having the lushness comparable to a wind quartet, composed themes contrast with short solos on synthesizer, tenor and sopranino saxophones and Seffer showcasing more of his unique high voice. Halfway the piece switches to a relentless synth solo over a fast drum beat that goes on for a while until the piece concludes with the instrumentation of drums, piano and soprano sax.

While other tracks confirm that Yochk'o Seffer is capable of composing warm, empathic and highly personal forms of avant-garde music combining modern classicism, free jazz and progressive influences, on the title track he pulls all the stops and creates a fusion of atonal classicism and unstructured free-jazz that at times sounds ominous, at times rigid and at other times shows that Seffer as a pianist had a bit of a Cecil Taylor influence. Not a palatable listening, unless you love later period Coltrane and/or Zappa's least accessible classical writing.

"Ima (1ere partie)" is a prelude to his next solo album, combining the low buzzing droning noises of his self-invented sonic sculptures, out-of-control bass clarinets rattling at the background, and haunting melodies carried by Seffer's vocalize, first doubled on a Moog synth and then on tenor sax. This is a mourning piece of proto-ambient music and as a precursor to the 2o minute title track of Ima, it shows that Yochk'o Seffer could also make electronic avant-garde music very well.

Delire is a rare and forgotten record that is unjustly overlooked. Nonetheless, it shows Yochk'o Seffer's boundless creativity as a composer, instrumentalist and improviser. This work transcends the usual trappings of jazz-fusion or progressive rock. 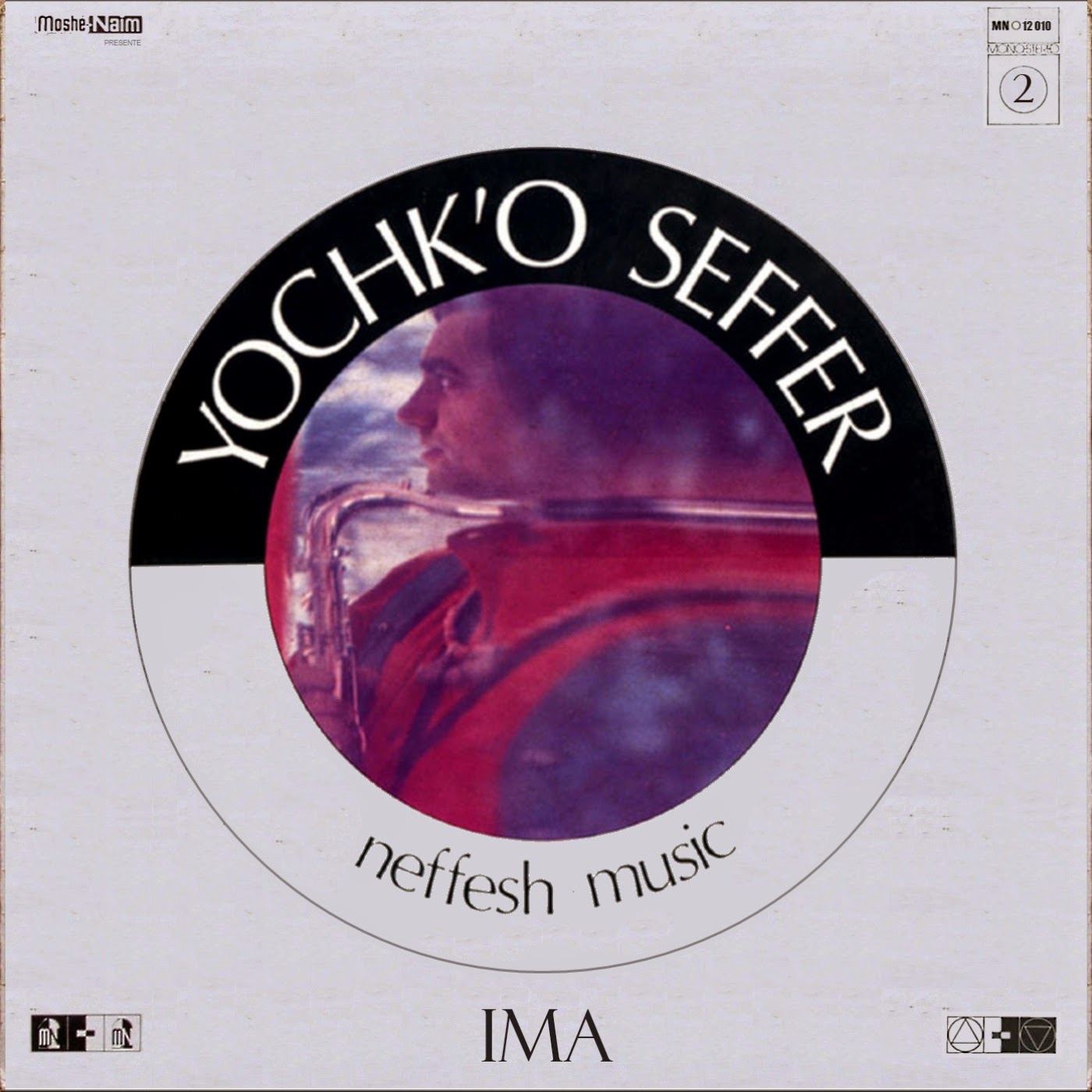 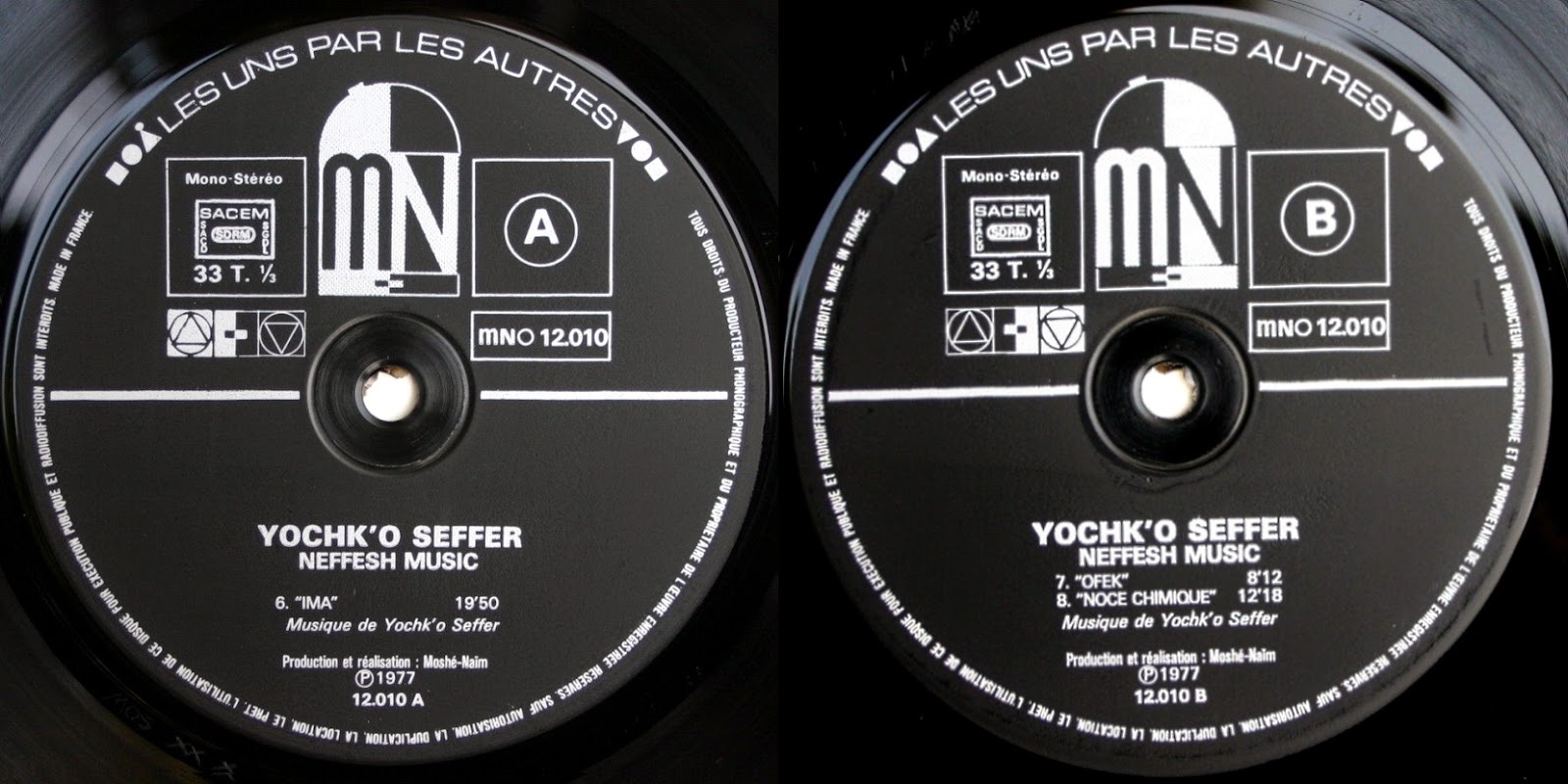 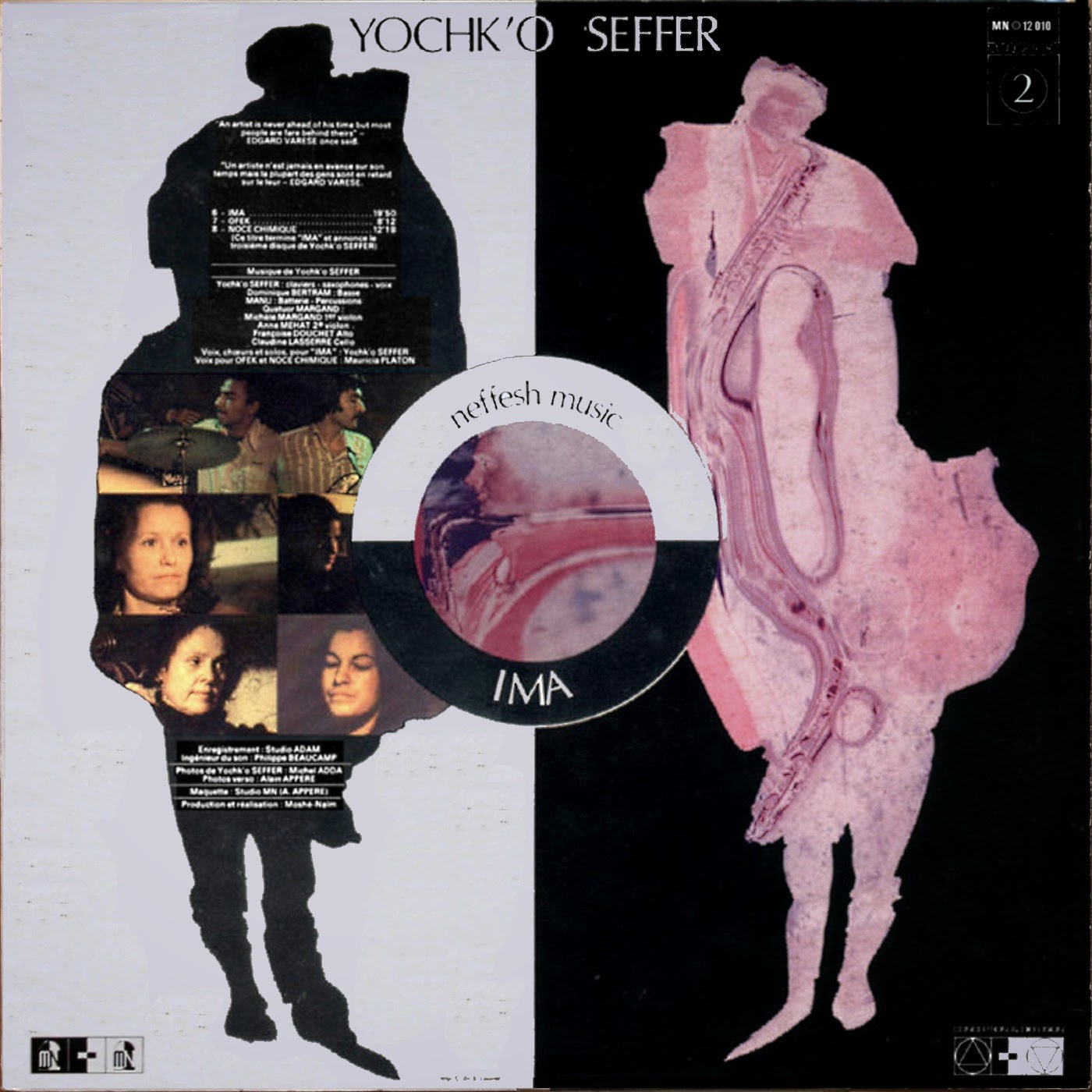 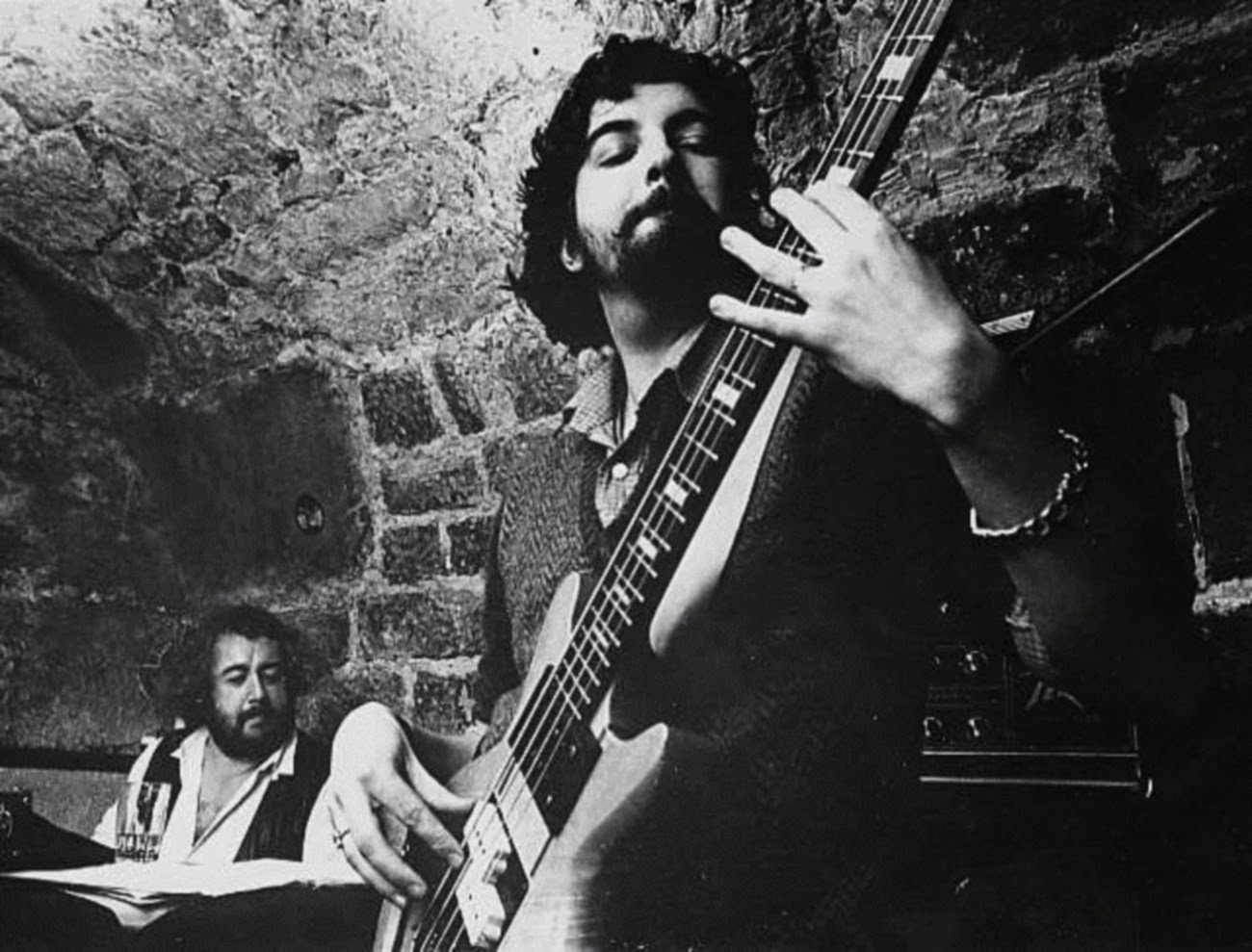 This LP is the 2nd part of a work named Neffesh Music.

Listen to him. What to say? Just a masterpiece! 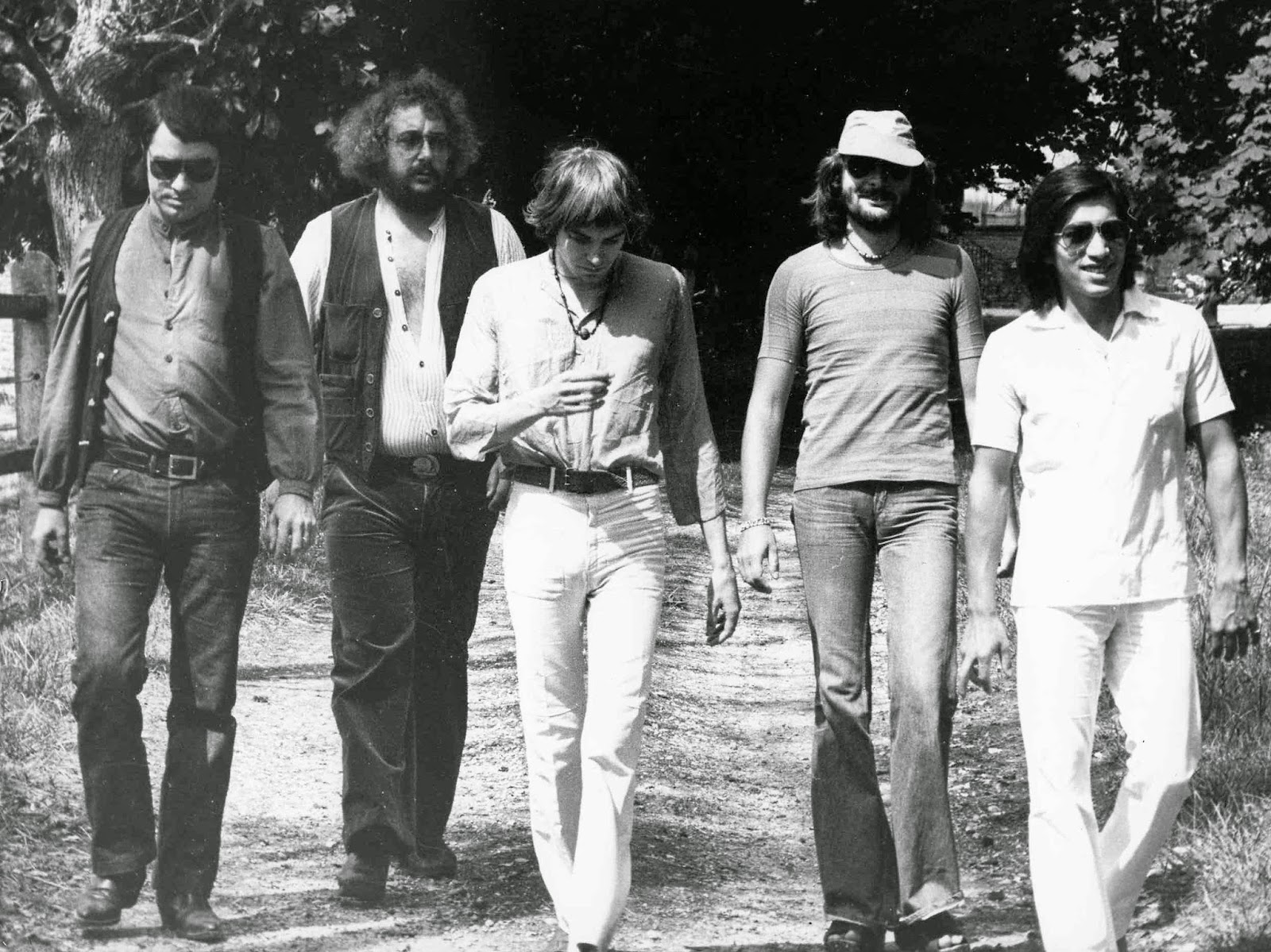 French sax player and composer born in Miskolc (Hungary) on 10.7.1939, Seffer starts studying music at the age of 6. He moves to France in 1956 where he studies reeds, piano and composition at the Conservatoire de Paris, mainly with Nadia Boulanger but also as an occasional student with Olivier Messiaen. In 1959, at the Bohème, he performs with Mal Waldron, the first one in an endless list of partners (amongst others, Charlie Rouse, Phil Woods, Steve Lacy, Ornette Coleman, Pharoah Sanders, Dave Liebman, Kenny Barron, Joachim Kühn, Daniel Humair, Henri Texier)… In 1969 he creates Perception together with Siefried Kessler, Didier Levallet and drummer Jean-My Truong. The following year, he appears in Magma's line up. In 1973, he associates with pianist François "Faton" Cahen to create ZAO. In 1976, he initiates Neffesh Music, a musical ensemble including jazz improvisers and solists from Pierre Boulez' Ensemble Intercontemporain. Between 1983 and 1985, Jean-François Jenny-Clark, Kessler, Michel Godard and drummer Peter Gritz will be part of Chromophonie, a big band that will be followed by a saxophone septet (1986). In 1988, he adopts a quartet formula (with Kessler, François Méchali and Gritz) that plays Monk's compositions; that first tribute will be followed by another tribute, to Coltrane this time and with eighteen musicians. He is also a painter and a sculptor and the father of cellist Debora Seffer.
Coloured spots, smelting masses, nuances and violent patchworks, he plays music as he paints and sculpts, putting together the dancing lyrism of his compatriot and fellow musician Bartok, the colatranian fire and the sense of evidence of Monk, connecting all these various elements as a multi-instrumentist virtuoso(from soprano to bass saxophone) led by an inexhaustible passion.