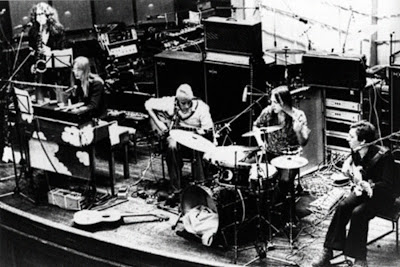 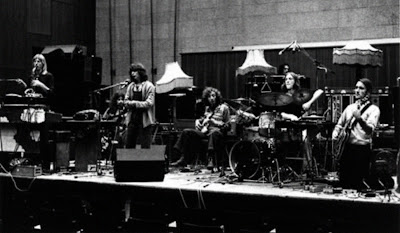 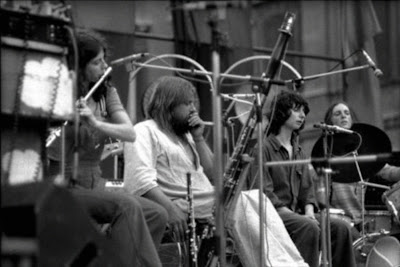 "Henry Cow is the new King Crimson". Though Frank Zappa and Soft Machine were both mentioned, it was the group's (supposed) similarity to King Crimson that was the main selling point of the first review I ever read of Legend, Henry Cow's debut album. And though a cautious attitude was definitely in order, this being the same magazine - though not necessarily the same writer - that four years earlier had called King Crimson "the new Moody Blues"... well, I got the album.

All were excellent musicians: on sax, clarinet and flute, Geoff Leigh was the most overtly jazz-influenced member; keyboard and reed player Tim Hodgkinson was already a very skillful composer, Amygdala being a track that one could listen to today without having any idea of its real vintage; on guitar (but also on violin, viola and piano), Fred Frith appeared to be the group's most overtly "rock" element; then there was the rhythm section: on bass, John Greaves was absolutely excellent in his choice of notes and their attack and release; while Chris Cutler would prove to be the last in the long line of inventive, personal drummers to come out of the United Kingdom (which is not to say that there were no more "technically proficient" drummers in UK after him). Though the LP definitely featured parts that on first listening sounded quite difficult, it still managed to fascinate and intrigue - while at the same time making one aware of the fact that there were musical dimensions of which the average listener (i.e., this writer) had no awareness whatsoever.

It could be said that with each successive album Henry Cow managed to test the limits of what was possible in "rock" - this should be understood as referring to both the form and the commercial environment in which they found themselves operating (this is the early 70s, remember, with T. Rex and Glam Rock as the new craze). Unrest saw the group drop the jazz (and Geoff Leigh) and get a quite different instrumental voice with Lindsay Cooper on bassoon and oboe. If side one was in some ways an extension of the first album, the studio-intensive side two was a leap not many listeners proved to be willing to take. And the lack of any serious interviews didn't help (in just a few years, Virgin Records had signed Faust, Henry Cow, Hatfield And The North, Robert Wyatt, Gong and Slapp Happy, but it was Mike Oldfield - and, later, Tangerine Dream - who paid the bills).

Things became even more confusing with the release of the Slapp Happy/Henry Cow joint album, Desperate Straights. Though the songs on the LP were not at all difficult, the only review I read at the time managed to compare Dagmar Krause's vocals to Yoko Ono's - which could not in any way be taken as a compliment! (I still remember the horrified look of those at Virgin Records - whose offices I briefly visited in Summer '75 - when I referred to In Praise Of Learning as being "Henry Cow's new album after Desperate Straights", a notion they hastened to correct.)

In Praise Of Learning managed to feature many musical streams on the same album - and quite successfully, I'd say: the short song, the long composed piece, the studio works, all was excellent. Plus, the album seriously rocked (well, maybe not in the States, their meaning of "rock" being quite different/definitely more limited than its European counterpart).

Soon all this came to an end - and to a different beginning. The day I got my copy of Concerts - an import copy I bought via mail order (I had previously bought all the group's albums in a shop in the centre of the town, and they were definitely widely available as Italian pressing) - I was quite surprised: who's this Compendium Records? It looked like Virgin Records had finally decided that this music was not, financially speaking, the shape of things to come. And though the Continent would prove to be a more fertile ground for this kind of music for a few more years, the hordes of those "complexity-challenged" who shot point blank in the direction of EL&P and Yes and who ignored even the mere existence of groups like Henry Cow (not that it would have made any difference anyway) were obviously bound to prevail.

As per the album's title, Concerts showed what a different group Henry Cow could be on stage. Compared to the old double LP of 1976 (there had been a CD re-release, about ten years ago, which I never listened to) this new Bob Drake-remastered version sounds miles better. I mean, not in the sense that anything has been "improved"! - the BBC session sounds as good as ever, the Robert Wyatt tracks sound as... well, as mediocre as ever. But it's obvious that a cleaner sound, no surface noise, and the fact of not having to deal with the physical limitations of vinyl definitely make for an easier appreciation of this music, especially when it comes to the long (almost half an hour!) improvisation titled Oslo which was originally compressed on side three.

The BBC session that (still) opens the album could maybe work as a "pocket introduction" for those who have never listened to Henry Cow. One of the group's best songs, Beautiful As The Moon, Terrible As An Army With Banners, opens: nice piano (Frith), expressive vocals (Dagmar), excellent cymbals (Cutler); then a nice reprise of the more "jazzy" Nirvana For Mice, off the first album, with Hodgkinson on saxophone and an ebullient but precise Greaves on bass; The Ottawa Song, an original, and a cover of the Wyatt/MacCormick-penned Gloria Gloom (off Little Red Record, Matching Mole's second album) show the group to be at ease.

Off Desperate Straights, Bad Alchemy has Wyatt on vocals and Greaves on piano; a nice cover of Wyatt's Little Red Riding Hood Hits The Road, off his much-lauded Rock Bottom LP, follows. Off Unrest, Frith's Ruins still sounds fertile and inventive. Originally placed on side four, the two concert extracts titled Groningen, by a Cooper-less quartet, are a superb group rumination on a theme by Hodgkinson.

Oslo is for this writer the real find: a coherent but continuously surprising improvisation sporting ever-changing timbres (Cutler on piano!), it shows how advanced the group's improvisations were at the time. As a bonus, we have the very good cuts that had originally appeared on the out-of-print-for-ages double compilation Live At Dingwalls (while listening to track 10 I happened to look at my old, but still working, turntable: a mere coincidence?). Udine brilliantly closes this (very long, but there's not one superfluous note to be found anywhere) double CD.

Meanwhile, some very dry but (in their own understated way) quite dramatic pages off Chris Cutler's touring diary will speak volumes about the group's "life on the road".