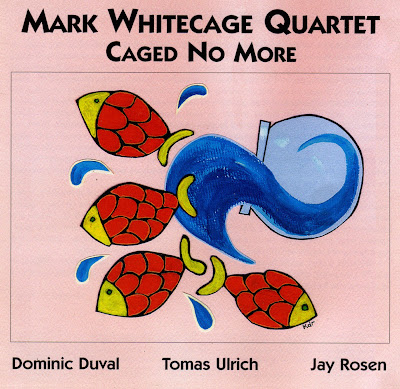 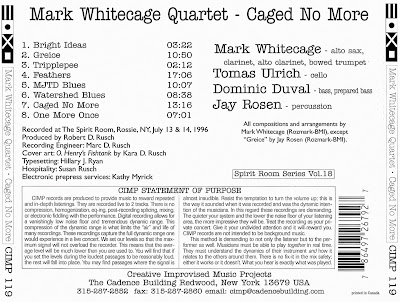 A 1996 release, Caged No More may serve as a metaphor for multi-reedman Mark Whitecage and his boundless array of musical propositions, formats and stylizations. Here, Whitecage along with longtime associate ’ s cellist, Tomas Ulrich, bassist Dominic Duval and drummer- percussionist Jay Rosen, stylistically demonstrate the fine art of improvisation! Recorded live at The Spirit Room in Rossie NY, The Quartet gain significant strides via the always stellar production and artful live recording techniques which has become a noteworthy commodity of the classy CIMP record label.

The 3 ½ minute “ Bright Ideas ” features Whitecage performing on clarinet as this 4 man army proceeds in forward motion with no looking back. The notion of “ bright ideas ” is outwardly and deterministically portrayed through fervent yet highly emotional dialogue among the bandmates. On “ Griece ” , percussionist Jay Rosen “ subtly ” heightens the intensity with his array of drums and small percussion instruments; hence the climactic nature of this piece is also enhanced by Rosen ’ s adept and meaningful tom-tom work. Rosen ’ s melding of African and Latin rhythms packs a mighty punch which effectively prods and pushes the band into various accelerations. Here, Whitecage ’ soaring yet articulate phraseology often contrasts Duval and Ulrich ’ s low register tones and keen improvisational speak. The cunning and altogether convincing dialogue throughout this project is a joy to behold!

The 17 minute, “ Feathers ” is at times frantic, soulful and touches upon, although in brief spurts – Albert Ayler....Here, the pace fluctuates as the motifs evolve through intuitive ensemble work and daring yet expressive dialogue. “ MJTD & Watershed Blues ” are two pieces which are noteworthy for Whitecage ’ brilliant utilization of tremolo and vibrato techniques. The “ blues ” portion of these pieces tend to veer off into free-jazz excursions while there is no doubt that these musicians are playing from the heart and taken as a whole, defy categorization.

Perhaps more than a textbook liturgy on improvisation this band performs with fire in their collective souls. Versatility and gutsy determination are two prime components here! The compositions are constructed around loosely based themes which afford this band tremendous opportunities to reinvent and evolve as a unit....... Caged No More is a beguiling assault on modern-improvised-jazz !!! Recommended.