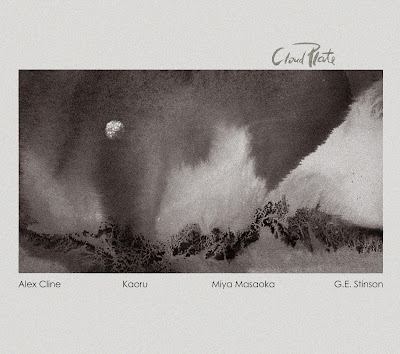 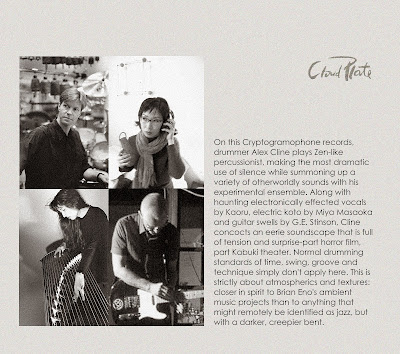 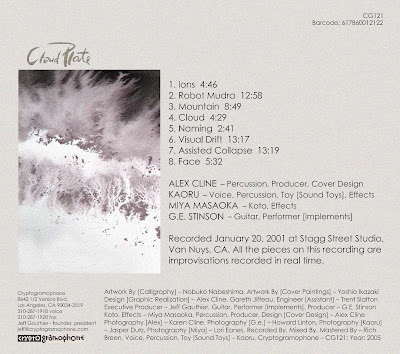 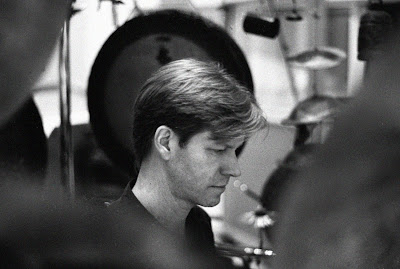 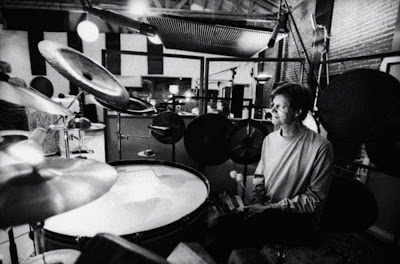 While Wilco guitarist Nels Cline may now be a household name to the indie rock world, his twin brother, drummer Alex Cline, like Nels, has been a respected player on the LA new music scene since the late '70s. But as long as Alex maintains the same high standard of innovation that's all over this terrific release—as well as in the work he's done with luminaries like Vinny Golia and Julius Hemphill, in his own Alex Cline Ensemble, and with Nels in Quartet Music and Gregg Bendian's Interzone—then greater recognition can't be too far off.

A mysterious-sounding, gorgeously packaged set, Cloud Plate finds Cline on equal billing with electric koto player Miya Masaoka, vocalist Kaoru, and ex-Shadowfax guitarist G.E. Stinson. Drawing less from the jazz side and more from the work of 20th Century avant- gardists, the music here is not so much about swinging but about constructing vast, glacial textures. Laden with chasmic reverb and perforated with Cline's distant percussion and Masaoka's taut plucking, these dark sounds are interwoven with Kaoru's processed, wordless (or is that her native Japanese?) vocals and Stinson's treated instrument. The beautifully monochromatic effect is foreboding, akin to the gray menace of a looming hurricane; Cline's swelling cymbal washes on the opener, "Ions," depict the ominously lapping waves of a storm-threatened beach.

While the koto does give the record an enigmatic, Far-Eastern flavor, it often appears Masaoka is using a bow to create sustained, cello-like notes. Against a curtain stitched together from these drones and an array of odd electronic effects, the brittle percussion clanks across an open field while scraped strings groan like some dying alien machine. With an arcing (guitar-generated?) motif, Kaoru's manipulated throat-singing, and a repeated, slicing loop that sounds like a squadron of underwater helicopters, "Robot Mudra" is a flashback to Martin Sheen's acid-soaked hotel  room segment in the opening minutes of "Apocalypse Now."

The densest track, "Assisted Collapse," builds from a series of echoing clangs, pausing to take in the tolling of faraway church bells and dripping water—even a few minutes of silence— before mashing up into a gnarled ball of Cline's hammering, Stinson's squealing overtones, and Kaoru's icy recitations. Scary stuff. But great.

To many, the boldly experimental sounds heard here may belong at an art installation rather than under the jazz banner. Indeed, those just looking for breathy sax solos should retreat to the Blue Note catalog. But forward thinkers will be richly rewarded.