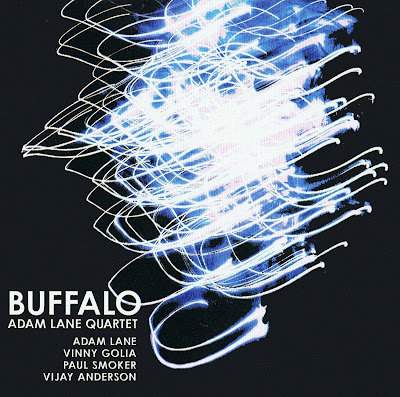 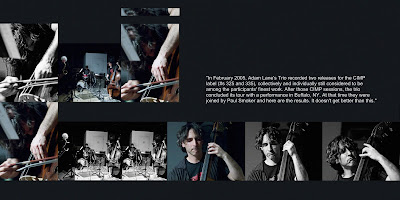 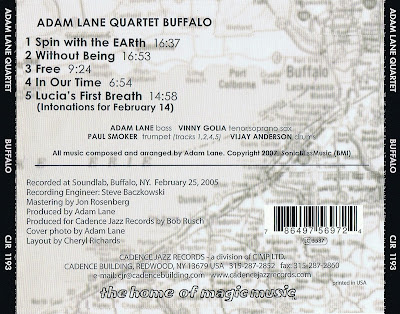 The sensations given by a live event, force and fascination of a live performance are often a difficult thing to transfer on CD.
Not always, but sometimes the purpose is perfectly achieved…as in this case. Product of a session at Buffalo’s Soundlab, NY, in February 2005, this recording is an excellent documentation of that event, reproducing the pure energy transmitted by it. A trio of absolute protagonists of the jazz scene (Adam Lane on bass, Vinny Golia on saxophone and Vijay Anderson on drums) that becomes a quartet on four tracks (thanks to the contribution of the trumpeter Paul Smoker).
The more significant aspect of this album is an extraordinary interaction among the players, who succeed to reach a particular balance, a unity of intents and action which unleash emotional impulses.
Free improvisation in great measure, but also melodic nuances ( “ Spin with the EARth ” ), smooth passages ( “ Without Being ” at its starting phase, with an impressive Lane’s solo that leaves space to Smoker and Golia, both in evidence for the rest of the piece), again, the peaceful atmosphere created by the Golia's flute ( “ Free ” ) followed by a compulsive free improv act.
Frenetic passages alternate with more meditative moments, after which suddenly the rhythm grows again (the beautiful final track “ Lucia's First Breath ” ). So genuine, so real, so free… 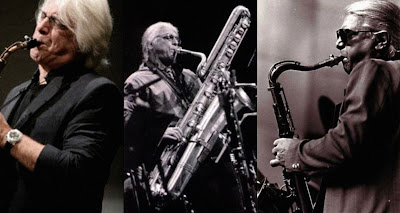 Adam Lane's is not only one of my favorite bass-players of the moment, but definitely one of my preferred musicians. His sense of musical freedom, combined with melody and bluesy soul is superb, as is his choice of band members. On this album Vinny Golia plays reeds, Paul Smoker trumpet and Vijay Anderson drums. The album captures several days of live performances in Buffalo, hence the title. And Paul Smoker did not participate on one track presented here. These musicians no longer need any introduction, but the way they play together here, is absolutely stellar. The first track brings an absolutely beautiful melody - although you have to wait a bit before a theme emerges - played superbly by the whole band, compelling, fierce and free. The second track starts with a gut-wrenching arco solo by Lane, which evolves into a straight blues with the horns circling around each other in wonderfully emotional counterpoint, then speeding up the whole thing to some free jazz uptempo boogie, just to slow down again at the end, leaving the audience enthusiastic and your reviewer with goosebumps (sympathetic piloerection). The third track, "Free", starts with Vinny Golia playing flute, all bucolic, cosmic and light, to be replaced by the tenor, creating an all the more astonishing effect with the agonizing violence of the storm that comes, unleashing all power a trio can muster to create a wall of sound, ending again in peaceful calm. "In Our Time" is a fully improvized piece, but the four musicians interact so well, creating chaotic tension on the spot, out of which the arco bass elicits some highly sensitive beauty, accompanied by long slow trumpet tones and an accentuating drums. But then listen how Golia intervenes, adding little rhythmic notes, without interrupting, but emphasizing the power of the trumpet, first echoing, then slowing the sax down till it becomes unisono, a signal for Lane to end in the same long arco-played tone. Astonishingly beautiful. The last track is an odd-metred piece, mid-tempo pushed forward by a bass-vamp and strong drumming, starting with the sax leading into a theme, and when the trumpet takes over, the piece shifts into a walking bass supported free bop frenzy, and each time the sax comes in, the original rhythm appears again, with Lane moving up the speed, pushing Golia to play the bejesus out of his soprano. This is a really an excellent album, with four top-musicians at their best and interacting at their best, responsive, creative, enthusiastic, melodic and respectful. Adam Lane is truly great, and I must say that every CD that he released so far is recommended, but this one is highly recommended.