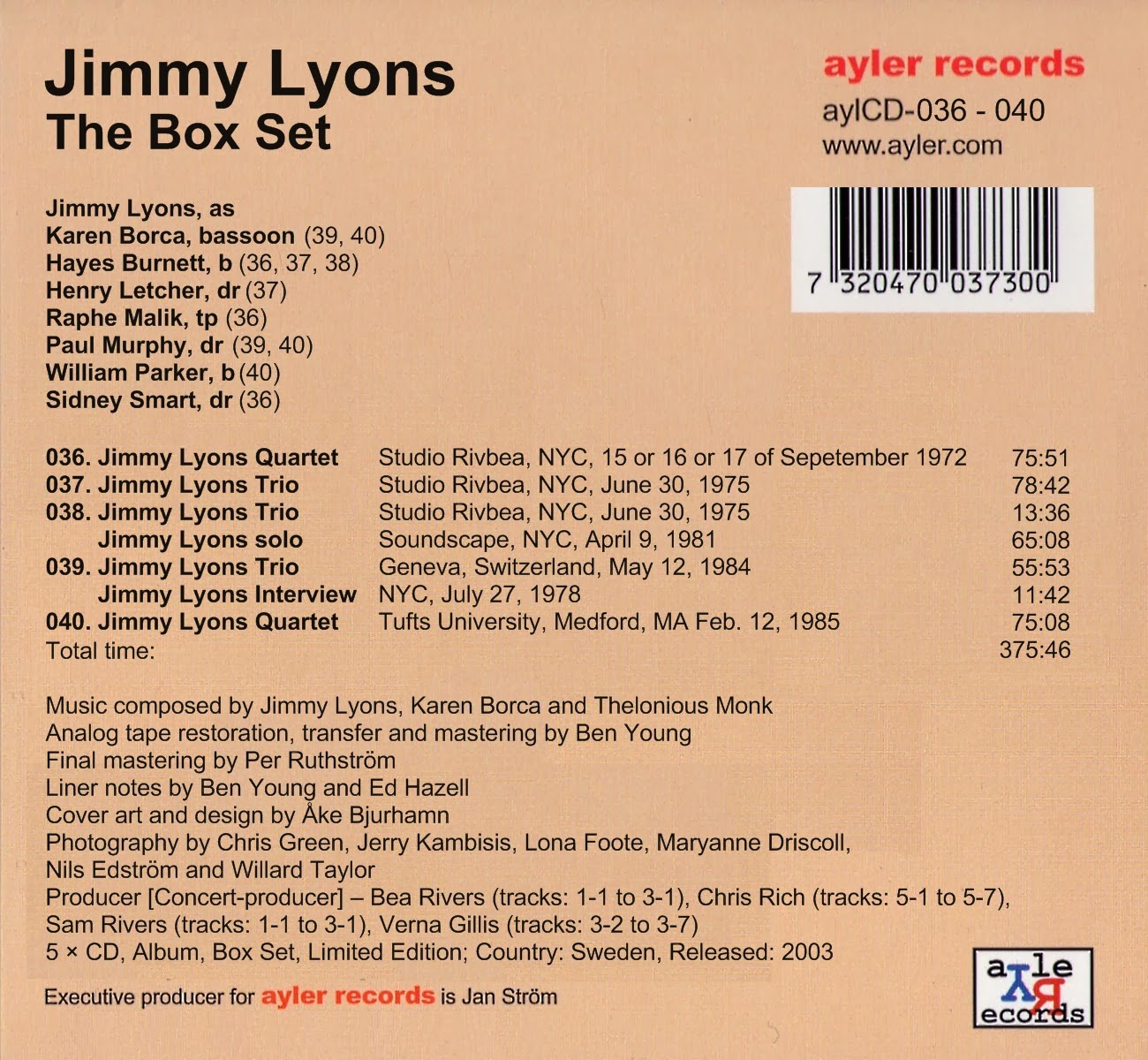 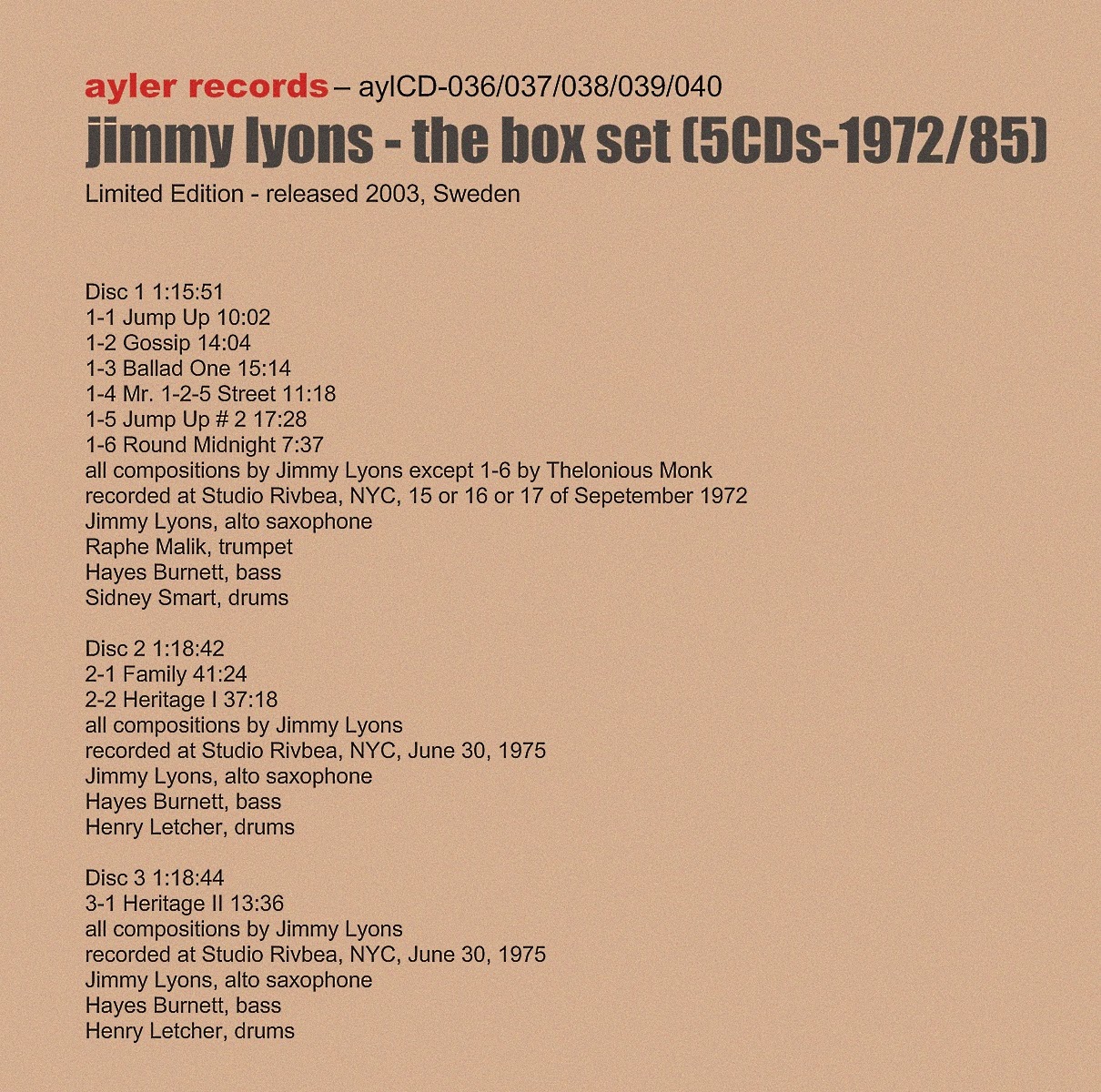 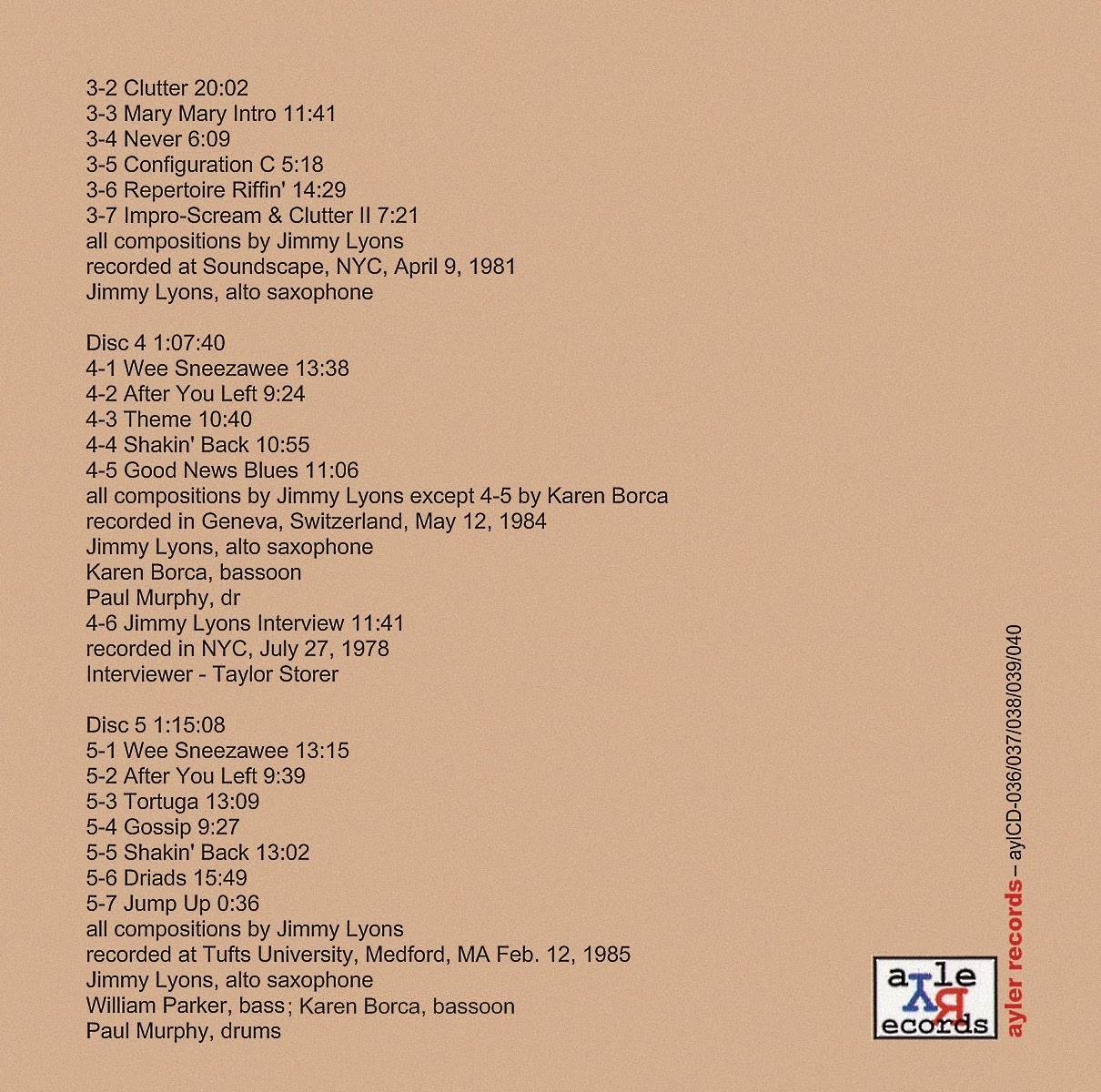 Jimmy Lyons is one of the most intriguing musicians to emerge in the 1960s, as the alto saxophonist provided one of the strongest links between bebop and the New Thing. Unlike many of the movement's provincially raised exponents, Lyons spent his formative years in New York, where he was able to jam with the likes of Cannonball Adderley and Elmo Hope before his historic, quarter-century association with Cecil Taylor began in 1961. Unlike some of his contemporaries, Lyons' solos were about not just notes but phrases: short, jolting cries and serpentine, blues-drenched lines passionately and expertly strung together. There is no more direct route connecting Charlie Parker to the '60s and its ongoing aftermath than Jimmy Lyons.

Yet this did not initially benefit Lyons, who, for a number of reasons, was slow to make his own records. After balking at an offer of a Prestige date in '61, Lyons had to wait until 1969, and then only made the minor classic Other Afternoons (BYG/Actuel) because of the last- minute cancellation of a Taylor-led session. Gaining traction as the leader of working bands took even longer. Lyons' units worked primarily in the New York loft scene until well into the '70s, and it was only a few years before his death in 1986 that Lyons found a steady outlet for their music with the Black Saint label. Still, Lyons left a sufficient body of work for him to be considered a major voice in his own right, a legacy significantly enhanced by The Box Set, a five-CD collection of ensemble and solo concerts spanning the years 1972 to '85.

In a 1978 interview excerpt with WKCR programmer Taylor Storer that is included in the collection, Lyons states that he saw few distinctions between composition and improvisation, a sensibility no doubt reinforced by his association with Cecil Taylor. However, Lyons pursued this position through conventionally formatted pieces, with themes usually stated in unison by the front line. The evolution of his thematic materials is an important thread of this collection, one that is potentially overlooked given the wealth of impassioned performances. The earliest concert, a '72 Studio Rivbea set with trumpeter Raphe Malik, bass player Hayes Burnett and drummer Sidney Smart, reveals Lyons to be navigating several overlapping currents. The tune that came to be Lyons' signature, "Jump Up," is a revving motivic line somewhat in the vein of Sonny Rollins' "East Broadway Run Down." "Mr. 1-2-5 Street" shows adeptness at the early Ornette Coleman gambit of gluing together fragmentary phrases with buoyant rhythmic shifts. And "Ballad 1" initially drifts toward Coleman and then veers with a Coltrane-ish phrase.

Largely because of his alto's central role, Lyons' pieces never seem derivative. The saxophonist bonded a jabbing attack and a plaintive tone in an instantly recognizable manner, and everything he wrote flowed from the resulting soul-stirring sound. This is most evident in the hour-plus solo concert recorded in '81 at Soundscape. It is simply engrossing to hear Lyons' sense of design morph effortlessly into cascading improvisations without being triggered by the abrupt abandonment of the theme by a second horn or the on-cue stretching of the rhythm section. This is not to suggest that Lyons could not achieve comparable results at the helm of a small group, a fact attested to by the expansive '75 trio outing with Burnett and drummer Henry Letcher. Still, this 90-minute Studio Rivbea workout does not represent Lyons' music at its pinnacle.
It takes the enlistment of two musicians outside the New York loft scene for Lyons' ensemble sound to reach full maturity. One is Paul Murphy, a drummer whose relentless drive and conservatory-honed precision and agility could single-handedly propel Lyons' music, as confirmed by a bass-less 1984 concert recorded in Geneva. However, the crucial catalytic voice in Lyons' group was bassoonist Karen Borca, the most dazzling double-reed player in jazz history. Not only did Borca's throaty chortle perfectly complement Lyons' tone, her virtuosity gave Lyons the latitude to ratchet up the degree of difficulty of his rapid-fire themes and to explore contrapuntal writing. On both the Geneva concert and the '85 Brown University concert that closes this set (with the now omnipresent William Parker rounding out the quartet), Borca's subwooferlike rumble in the heads and her high-voltage solos prove to be essential to Lyons' music.

All in all, The Box Set is a triumph.