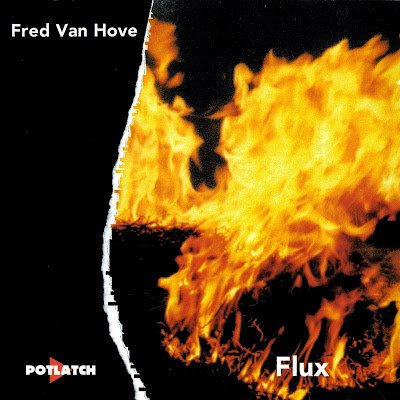 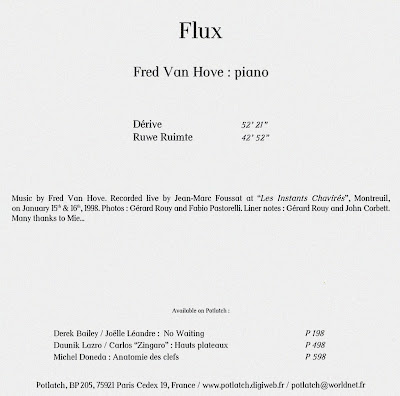 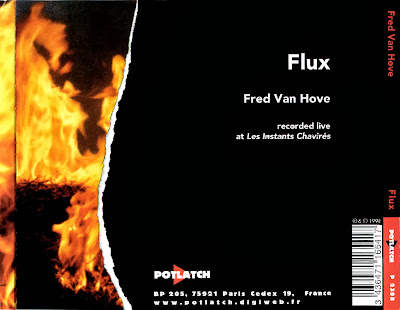 Recorded live in January 1998 at Les Instants Charires Montreuil, France, Van Hove performs two pieces of 52 and 43 minutes length. His ceaseless creative pounding lines, working right hand runs while his left hammers, are both acts of endurance and one of a fertile imagination. His musical thoughts develop from his physical movements, like Jackson Pollock painting in the airspace above his canvas laid out on the floor. Like Pollock, Van Hove's thoughts are anything but random drippings. He passes intensity on, builds to a climax, releases tension with gentler cycles and opens the piano for some dulcimer sounds and wood thumping. The music heard is easy to relate to on several levels. Physically, the workout is impressive, emotionally or spiritually, his playing pulls you into the action before leaving you with a cathartic sigh, and intellectually (and maybe socially) you grasp the commitment he has to creative music. A satisfying and exhausting experience.

John Corbett's sleeve notes claim an analogy between solo improvisation and shadow-boxing. That's as may be, but Van Hove feels very much like he's landing every heavyweight punch he throws on these two marathon outings. Frequently occupying the bass register with his high-impact, staccato ostinati, his music can often be bludgeoningly loud and irritably angular.

Yet that's only half the story. If Van Hove can pound you into submission, he can also find a sweet, rhythmically ambiguous place among the higher notes. His right hand seems to dance across the keys, so intense is the illusion of movement in his playing, yet there's no hint of gestural sketchiness. Like Crispell, who he can quite strongly resemble at times, he has an ability to weld rhythmic and melodic shapes to logical harmonies. This can sometimes give his playing the air of Messiaen's more complex solo keyboard works.

It also completely side-steps the Cecil Taylorisms to which many avant garde pianists are prone. For all his whizz-bang technical fireworks, Van Hove's connections with Taylor are not his high-definition runs or the occasional cluster, but the impression that, at the centre of the whirlwind, careful thought is being put into the form of the piece and the development of its ideas.

Van Hove's playing may be closer to Modernism than to anything else, but there's a strong jazz connection here too. In particular, his left-hand strategies are often of the bass-line variety, while a hint of boogie woogie even surfaces now and again. His right hand can sometimes recall the great rock 'n' roll players, while a rhythmical reference to ragtime can occasionally be discerned within the tempestuous world he creates.

There's not much to separate these two long pieces -- each follows a similar path in its own fashion. Each has a ferocity which is all the more intimidating for its being so apparently casual, and each proceeds by generating and then transforming fairly simple materials, creating an organic flow of music with a surface which bristles with detail. One is reminded of Salieri in Schaeffer's Amadeus: if there really are only so many notes one can listen to in one evening, the audience at Les Instants Chavires must have gone home with hemi-demi- semiquavers dropping out of their ears. Like Mozart, though (and there's a comparison Van Hove can't have had too often), his superficial complexity compliments a formal elegance.

This double CD represents a technical, creative and athletic tour de force. Those who thrive on this level of intensity will find their ears very pleasingly crammed. It's also worth noting that, for a live document of such astonishingly loud music, the recording is very clear and not at all muddy. Highly Recommended.