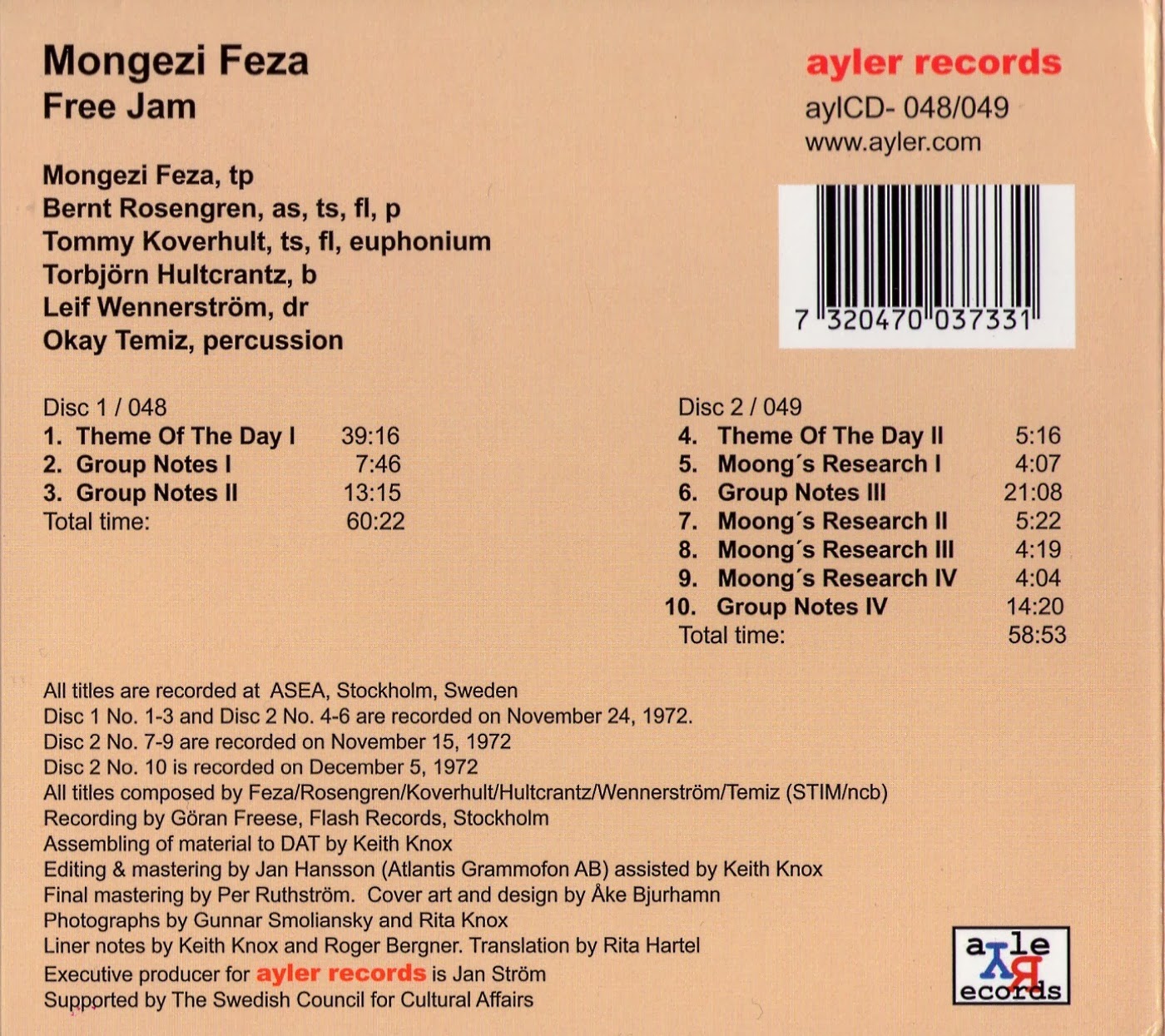 An extraordinary recording, this two-CD set captures trumpeter Mongezi Feza fronting the remarkable Bernt Rosengren Quartet, with Okay Temiz added on percussion. Recorded in 1972, but not released until 2004 on the Swedish label, Ayler Records, the ten tracks constituting nearly two hours of music are a major find, despite the somewhat sub-par recording quality and the truncated nature of some of the pieces.
As is customary with this label, the production quality is first-rate, with meticulous notes contained in the 20-page booklet, superb packaging, and a serious effort to clean up the sound.
For those familiar only with Feza's work with the Blue Notes, his ability to create astonishing solos at lightening speed in a largely unfettered environment may come as a pleasant surprise...

Some music and musicians are linked irrevocably to a specific era, either because premature exits or enforced retirement have limited their contribution to those particular times or because their strongest work appeared then. Feza, of course, suffered an all too early exit while Windo kept on going until 1992. While it is impossible to predict what the trumpeter would have gone on to achieve, in Windo’s case I feel that the work done in the ferment of the 1970s was among his strongest and most intense.

Explosive South African trumpeter Feza was a guest with Bernt Rosengren’s quartet along with percussionist Okay Temiz, during November and December 1972 and Free Jam was recorded during this time in an old paint and glass-blowing factory in Stockholm. The location may not seem inspiring but the sound definitely is, being both raw and full of the energies of collective improvisation, with band members shouting encouragement while the rest respond with vigorous, ebullient solos and group blowing.

On the first cd the opening ‘ Theme Of The Day ’ is nearly forty minutes of this approach and features a typically buoyant solo from Feza as well as a freely ranging alto break by Rosengren and some muscular tenor from Tommy Koverhult. But much of the track is a high energy group interaction with players moving to the foreground then shifting back into the ensemble again. It is a truly exhilarating sound driven by the twin percussive assault of Temiz and quartet drummer, Leif Wennerstrom. It ends with Rosengren abstracting a melodic theme, apparently from a pop song, ‘ Sambabiten ’ , stretching it a little and bringing the piece to a joyously steady rhythmic conclusion.

From the same day ‘ Group Notes 1 ’ continues the mood of free improvisation and highlights Feza’s dynamic playing alongside Koverhult and Rosengren. ‘ Group Notes 2 ’ also finds the tenor man exploring though in slightly more restrained manner, holding notes then unleashing cascades of them. It reminded me of Coltrane momentarily. There is a more spacious feel to this track though the energy levels are still quite high.

The second cd also opens with ‘ Theme For The Day II ’ , in this case a spiralling motif that gradually mutates into a group improvisation led by Rosengren. The drumming is particularly fierce and it is a shame that the track seems to fade before it really gets started. Following on though, is the first of several tracks which prominently feature Feza. ‘ Mong’s Research I ’ allows him space to build a furious solo supported only by Wennerstrom and Temiz. He then carries this on at the start of ‘ Group Notes III ’ wrenching squirming metallic figures from his trumpet whilst again being powerfully driven by the force emanating from the twin percussion team. It is probably one of the longest solos I've heard him take and his energy and invention become quite staggering, cutting a swaggering path through the track. The other major force on this track is Rosengren who matches Feza in resourcefulness and power.

A further three sections of ‘ Mong’s Research ’ also contain stunning examples of his technique as he bursts out in barely contained melodic torrents over Rosengren on piano. He seems to want to explore every aspect of the improvisations, his tone shifting through a range of moods. Again, this is another one of the most sustained performances I’ve come across, possibly even surpassing work he laid down with Brotherhood Of Breath and The Blue Notes and reminding me what a terrible loss his early death was for the music.

Although this is ostensibly a guest session from the trumpeter he contributes much of the excitement and verve to the performances, sounding like a small musical tornado, aided crucially by the empathies of both drummers. For anyone, like me, who feels they’ve never heard enough of his work this is absolutely essential listening. Jan Strom’s team at Ayler deserve an award both for making it available in the first place and for presenting it in an informative and attractive package with distinctive cover artwork, as ever, by Ake Bjurhamn.