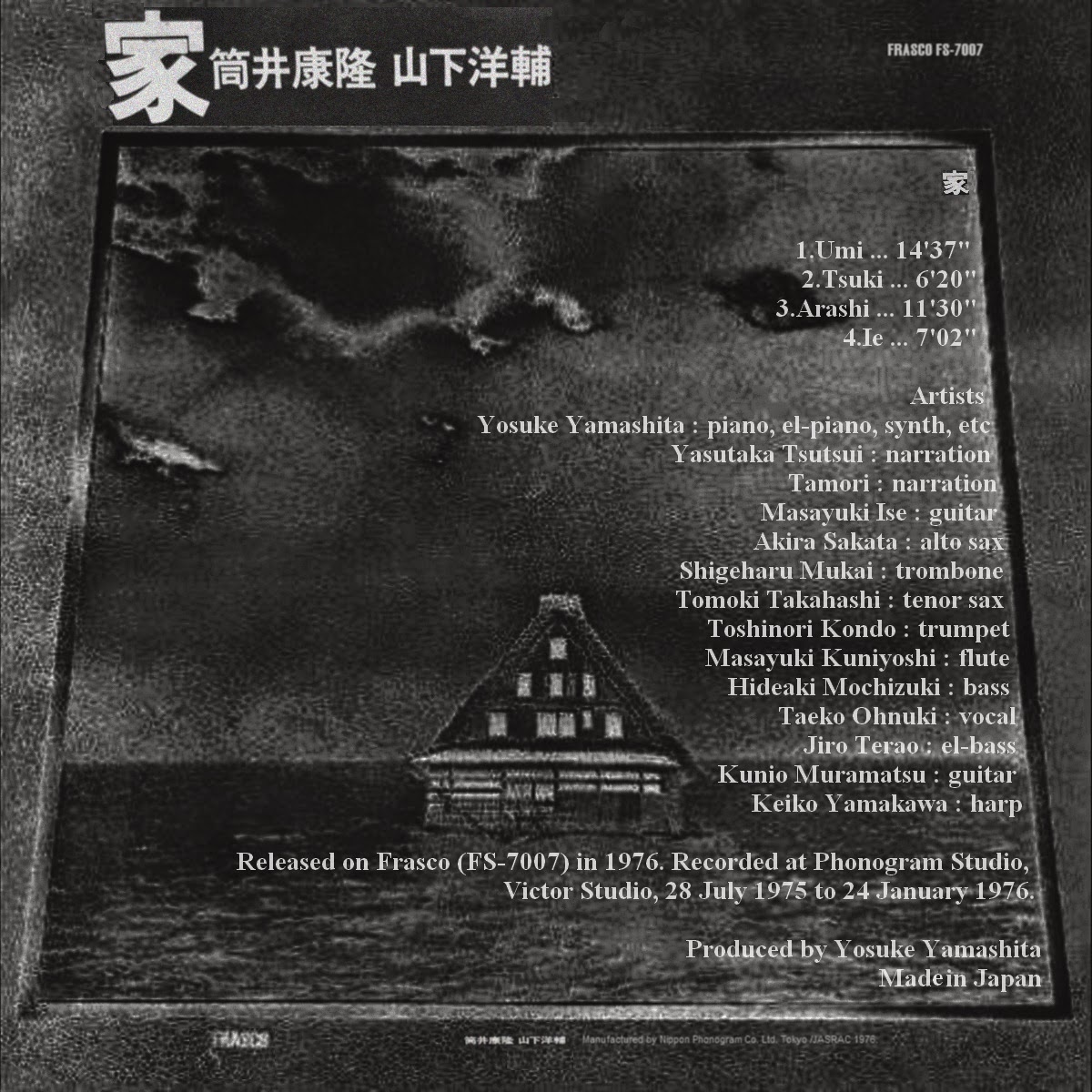 One of the strangest LPs I have, it’s rather rare, I’m told and is a joint effort by Yosuke Yamashita (legendary free jazz pianist and famed soundtrack composer) and the Ballard-ian SF-author, Tsutsui Yasutaka (who wrote the lyrics and, I think, an original book or play which this LP sonically adapts). Although, I’m not sure if this piece was ever adapted for theatre – it would seem likely, given the Japanese tradition for such fare - but, aesthetically, it sits comfortably within the remit of Julian’s Japrocksampler. If ever Julian adds a new appendix of extra works in a second edition – this one is in real need of consideration.

Someone on the ever reliable MUTANT SOUNDS blog describes it thusly: “like a combination of Franco Battiato, Mike Oldfield, Igor Wakhevitch, Urban Sax, Stomu Yamashta and Keith Tippett.”

Released in 1976 on the Frasco label it features a whole host of musicians playing what amounts to a small orchestra and a small cast of actors/narrator – Yamashita plays an arsenal of keyboards, including warm-sounding Rhodes, icy grand piano (possibly his forte?), Hammond, and both Korg and Arp synthesisers. As well as the nominal strings and brass of a small orchestra set-up, there are harpists, chorales, upright bass, traditional ethnic Japanese instruments (particularly percussion) and synthesized guitar (played by Ise Masayuki).

As to the story, I’ve no idea – it seems rather dark and gothic – the 6 page insert featuring some rather disturbing gothic-surrealist ink drawings (Mervyn Peake by way of Paul Delvaux). An odd house situated in the middle of a becalmed sea, there’s a dark and obscured figure in a boat (not noticeable at first), about to board the house maybe? Inside the booklet features the same house in a montage amidst skeletons, oversized heads, shooting stars, blood veins or bodily entrails and owls and butterflies that do little to lighten the mood created. Suffice to say, it’s obvious this tale has its ‘down and dark’ moments!

“Umi” (14:37) A nebulous Korg 700 series ushers in a tumbling, fumbling melody – that sounds like its falling from the inky blue night right into the ocean depths – like some small sea anemone skittering around the ocean floor as gamelan-like percussion and low-key synthesiser rumbles begin to tremble underneath. The whole atmosphere is remarkably aquatic to begin with – or as if we’re somehow inside the veins and arteries of a body, traversing inner space.

Odd string instruments are plucked and stroked, as the narrator sounds like he’s chewing on some gravel. He begins to cough and stutter as if the clearing of his throat figures as a musical component. The trance-like vibe, however, remains, as kotos and other loose-stringed things coax out some very sinuous sounds. The ‘deep sea’ synthesiser line disappears to be replaced with thrummed percussion and trance-like drones of electronic mush. The narrator begins to introduce the tale. As the drone gets more assertive a Terry Riley like piano line begins – repeated over and over - and warm electric guitars unfold, with rich warm notes peeled off. The piano line is like a bizarre sonic Moebius curve of notes, pitched in some nether region situated between all the various modes.

Over this a warn Rhodes is added and the late night Miles trumpet wails mournfully, a perfect soundtrack for a 3am drive through some neon mega-city – a perfectly posed blend of People’s Ceremony - Buddha Meets Rock and Bark Psychosis immense Hex LP. Suddenly, a resounding bass undertow heralds a wonderful female vocal chorus who half whisper/ half sing (over and over): “Japanese, Japanese / Sight Breeze, Slight Breeze…” The repeated piano riff gets stronger and out of the blue Yamashita pays homage to the Tubular Bells riff from, well, Tubular Bells(1973) and more rigorous as free jazz flutes skit across its surface to be joined by rampant piano (of the like Yamashita is famed for). Upwards and upwards this circular prayer travels until it suddenly cuts off – leaving behind a pale, pastel electronic sequence.

This sequence is the introduction for “Tsuki” a slowly moving, slowly gestating, late night stroll of a track – the narrator continuing the tale as walking upright bass and candle pale string washes on the synthesiser create a very cinematic noir-ish feel. Pastel strings and quivering guitar chords tremble and gradually wither away into the overall mix. Its very meditative and certainly has the same repetitive mantra-like patience as the People LP. The narrator continues as only the sequence behind him continues. After this remarkable drop out the body of sound thickens to introduce Ornette Coleman-like Saxophone (half-blues cliché/half free-jazz speaking in tongues) and Hermman-like string synthesisers which gradually, and insidiously, begin to devour the track, their tonal manoeuvres getting more and more sinister, growing like vines chocking the atmosphere, as saxophone cries out – a tremolo effect washes over the strings, which climb and climb. Each new interval seemingly more discordant and creepy than the last - It’s incredibly cinematic (of course, Yamashita sound-tracked many Japanese films). Upwards and upwards the strings dive, the sax more and more frenetic until… silence, and its left to the narrator to utter some final compelling epitaph that I don’t understand (and could well be – “Continued on Side Two!!”

Side Two’s “Arasi” is much more abstract and obviously moves the narrative on considerably, with the narrator battling for the first 5 minutes against huge, phosphorescent synthesiser swells, distant atonal piano dribble, Africana percussion, sounds effects of gunfire, wind (lots and lots of synthesised wind), and baby cries. This track grows into a huge sonic collage – the narrator seemingly infected by the musical madness that is occurring all around him as he himself begins to rant, other demonic voices swelling up with him, and it’s as if we’ve entered an Igor Wakhevitch nightmare in the Land of the Rising Sun.

With the keyboards still fizzing and farting away, distant free jazz piano dribbling in and out of the cracks left in the sound of synthesised wind, a bizarre Latin guitar strum begins as the narrator whistles along. Yet more odd characters appear, talking, whispering, ranting, and growling. Buddhist chants appear out of this sonic stew briefly, as the dialogue returns at arbitrary moments. Things get increasingly more bizarre for the next 8 minutes – it makes Revolution No 9 sound like a “Story for Bedtime,” until the whole thing ends up blasted apart by a bomb of Nagasaki-like proportions.

Ice slithers of piano are the first thing to emerge out of the destruction – clear as a bell, cool, cool shards of brittle sound and then another slow bass march and maudlin accordions and synthesisers begin a calming Debussy-like waltz through this futuristic mindscape of sound and energy – replete with cascading harps, seagulls, waves (synthesised!) crashing on the shore, cosmic washes of synthesiser – until all is eventually bundled together in one big miasma of sound and heads off into the galaxy - a huge supernova of sound. After what seems like some audio-verite studio discussion with the narrator, some woman, and various technicians, the last track begins

“IE” begins on a drone – backwards guitar and cymbal hits sucks sound and life into the track, a weird synthesiser tone that merges in and out of a variation on the repeated riff of Side One; gentle guitars and harps are plucked, as more narration begins to close (what surely must be) a hugely strange tale. The effect is almost like a psychedelic Musical box, but the arrangement builds beautifully again – as heavenly trumpets and strings orchestrate the piece – a Japanese “Sketches of Spain” maybe, it’s quite, quite moving.

Yamashta’s orchestral jazz spirit really pervades here in this closing movement – as phat Korgs join in on the accompanying lines of brass. As largely reverberating vibes are stroked – stunning stuff – there’s an almost aqueous, oceanic affect - similarities (and distinct ones at that) with Talk Talk’s mighty Spirit of Eden are evident. Wonder if Mark Hollis and (Bark Psychosis’) Graham Sutton know this monster – it certainly sounds like it, hearing their own work. A gorgeously ethereal (as only the Japanese can do) spiritual jazz aesthetic brings these bizarre musings to a close, here we could be right at the bottom of Robert Wyatt’s Rock Bottom, a strangely innocent and humble quality. The ever-repeated mantra goes on and on and on….into everlastingness! Or, alternatively (and as it sounds on here) until the batteries run out!

One of the most mysterious records I own. Enjoy!