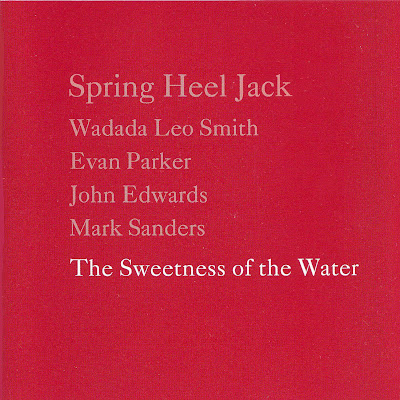 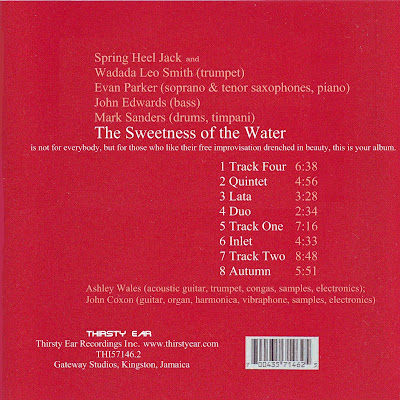 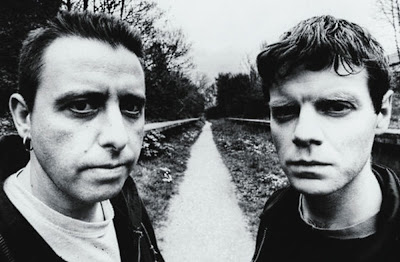 When the U.K. hard drum 'n bass "duo" Spring Heel Jack began collaborating with Thirsty Ear and their Blue Series curator Matthew Shipp, one doubts they had any idea that their own sense of proportion and direction would shift so far away from their source material as it has. Sweetness of the Water is the band's fourth outing in the Blue Series, and as such, it is their most provocative, challenging, and beautiful yet. John Coxon and Ashley Wales have become musicians in the old-fashioned sense of the word on this completely improvisational outing. Their guitars, vibes, keyboards, trumpet, and hand-percussion chores equal and even surpass their sampling and electronic contributions. In realizing this project, the "duo" once again turned to saxophonist Evan Parker (who has been a fixture since 2000) and brought together a rhythm section consisting of Mark Sanders on drums and John Edwards on bass. In addition, trumpeter and vanguard composer Wadada Leo Smith is present this time out. There are eight pieces on the set, none longer than eight minutes, the shortest of which is just under three. Sweetness of the Water exists in a far less controlled environment this time out, and since the language is free improv, Smith and Parker dialogue with one another uninhibited, and often, in unhurried, non-confrontational language. There are no intense flurries of engagement, but the lyrical communication is stunningly intuitive. Coxon's electric guitar on "Track Four" that opens the set walks slowly through the center as a bridge between the rhythm section and Smith's gorgeously long lines. Harsh feedback and improvisational elements are underneath the two main instruments, but they simply fill space with texture and layers of dynamic possibility. On "Quintet," Parker and Smith begin the first of their dialogues, with Coxon again creating an edge for them to walk along. Pace, tension, and texture are the points of congress here, and they come together seamlessly as Sanders and Edwards dance around the edges, bringing them into sharper focus. Harsh electronic sounds, drones, and an organ usher in "Lata," as Parker solos in the middle register. Pulse is the language of rhythm, though drums are absent. Think My Bloody Valentine meeting Gavin Bryars with Evan Parker soloing and you have it. The intricate guitar and drum encounter on "Duo" is a wooly and thoroughly engaging exercise in control and listening. But the recording's grandest piece, "Autumn," closes the set. Coxon's church organ blares out a majestic series of open chords as electric guitars, shimmering drums, and a confluence of lines by Parker and Smith punctuate the Wall of Sound. It's eerie, strange, and crystalline in its strange elegance and shifting dynamics where elements of drone and pulse are woven with multi-dimensional sonics and tight, restrained harmonics. The sonorities as they mutate and change shape are so haunting and pervasive they become their own esthetic.
Sweetness of the Water is not for everybody, but for those who like their free improvisation drenched in beauty, this is your album.