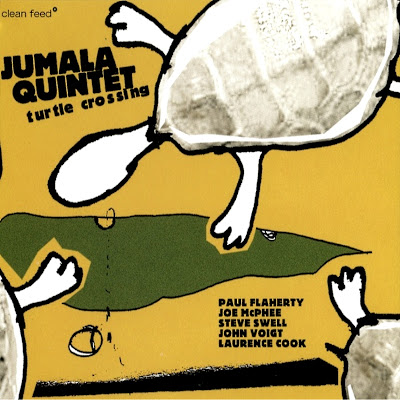 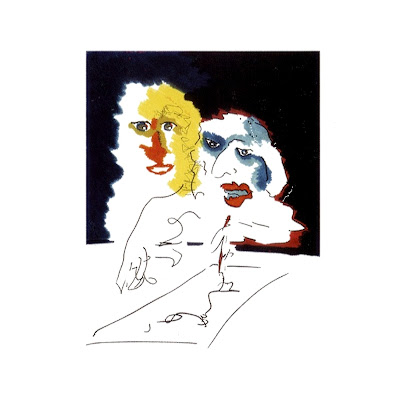 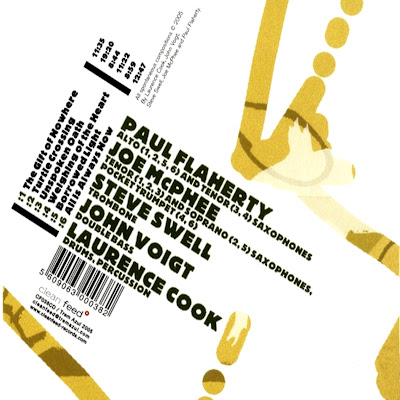 "Few players have forged the free jazz genre with the unmitigated intensity and purity of Paul Flaherty, the organizer of The Jumala Quintet. Among diehard aficionados, Flaherty ’ s albums are the stuff of legend: They are difficult to find, uncompromising in concept, cathartic in intensity, and impressive in the level of performance.

For this extraordinary session, the saxophonist invited two experienced players to join him on the “ front line. ” The versatile Joe McPhee, who performs on tenor and soprano saxes and pocket trumpet, adds a breadth of experience and level of musicianship that have catapulted him to the higher echelons of jazz improvisation. Steve Swell, the other horn, has emerged as one of the most exciting trombonists on the New York scene, and if you listen closely you can hear in his solos the whole history of the trombone from Kid Ory to Roswell Rudd and beyond, all delivered with a suave irreverent swagger. Rounding out the group are bassist John Voigt and drummer Laurence Cook, each of whom has recorded before with Flaherty as well as with a host of other players in the now-decades old tradition of Free Jazz.

It seems inconceivable that this is the first time the group ever played together, without even a single rehearsal. But it is true: Not only had these players never performed in concert or recorded together as a group, but there were no discussions in advance as to what was to be played. The quintet simply went into the studio and blew.

It is a tribute to the quality of the players that the results are as special as they are, and undoubtedly this is one of, if not the, best albums put together by Paul Flaherty. (He prefers not be called the “ leader ” as he insists the music came strictly from a group effort.) Considering that Paul Flaherty has been pursuing his path of purity for many years, and recognizing his reputation as a flame-thrower, it is more than likely that not a few will do a double take after hearing his sensitive, highly integrated performance on this album. Who is this purveyor of simple pleasures, this consummate executant of the phantasmagorical who leads the unwary down undiscovered paths? Who is this explorer, this Christopher Columbus of the twenty-first century, a seeker of the unknown?
Open the doors and be prepared for something new."

His is a great date featuring a first time unit lead by Paul Flaherty on alto & tenor saxes, Joe McPhee on tenor & soprano saxes & pocket trumpet, Steve Swell on trombone, John Voigt on double bass and Laurence Cook on drums. Over the past few years a number of my favorite players like Flaherty, McPhee and Swell, have been getting recorded on a more regular basis and getting some of that well deserved recognition. No doubt that Paul Flaherty and Joe McPhee are not spring chickens as both must be pushing sixty. The Boston-area based rhythm team are also older cats who have played with Thurston Moore and Flaherty on occasion. This is quite a fine free-jazz session with inspired playing from all five of these veteran musicians. They take to time to work through more spacious areas and there is strong interaction between all participants. The turtle mentioned in the title is a creature that moves very slowly but does eventually get to where it is going and that is a good metaphor for these great, determined explorers.

"Turtle crossing" is the testimony of the one and only occasion when Paul Flaherty, Joe McPhee, Steve Swell, John Voigt and Lawrence Cook met and spontaneously played together, five years ago. A quintet armed with two saxophones, trombone, double bass and drums, Jumala spins its wheels right from the start, moving away from jurisdictional phraseologies and adding a few ounces of haywire poorhouse energy as a product of intense interactions during some challenging propositions. Swell's trombone in "Weighing of the heart" is something to be clinching to in the context of what's maybe the best track in the disc; the smart arco elucubrations by Voigt often help avoiding the fall into the feared (at least by me) "swingy/jazzy" vibe. The real best comes when the group travels near to well behaved - if never rehearsed - organic counterpoints, thus liberating the music from any aura of "domestic freedom" that could have ruined even the best intentions. Ever the perfect players, Flaherty and McPhee exchange educated opinions, bitter darts and incendiary omens, finding reciprocal comprehension in Cook's rhythmic discrepancies even during the most abundant blowing tides.