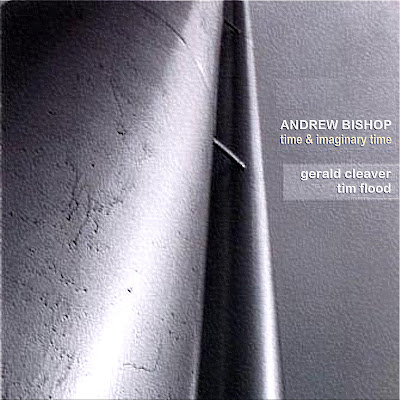 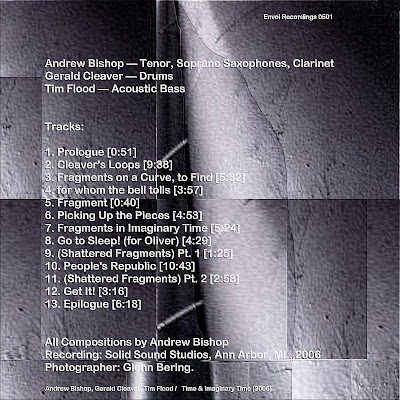 The trio of Andrew Bishop (saxophones and clarinet), Gerald Cleaver (drums), and Tim Flood (bass) draws its aesthetic through the use of diverse methods to find a balance of composition and improvisational forms along with a search for a cohesive equilibrium of musical genres.

On his inaugural release as a bandleader, saxophonist/clarinetist Andrew Bishop proves that avant-garde jazz benefits greatly from the touch of a skilled composer. Sure, you need chops, and Bishop has chops to burn, whether navigating the Lacy-esque architecture and parallel time universes of "Cleaver's Loops" on soprano or blistering the wallpaper with his tenor overtones on the ten-plus-minute fiery "People's Republic" -- the former titled after this trio's drummer, Gerald Cleaver, and the latter a tongue-in-cheek but affectionate reference to everything liberal and progressive about Bishop's Ann Arbor hometown. But an ability to raise the roof is only part of the picture. A composer of contemporary orchestral and chamber music, Bishop combines a jazzman's fire and flow with a rigorous compositional sensibility, resulting in a potent and highly satisfying blend. Even his "free jazz" maintains a strong sense of thematic development. Upon hearing the entirety of Time & Imaginary Time from "Prologue" to "Epilogue," you will perceive a narrative cohesion and sense Bishop's overarching theme "inspired from theories on human understanding and conception of time," even if, like the best jazz composers, Bishop approaches thematic material from oblique angles and doesn't hit you over the head with obviousness.

The CD's sense of continuity is enhanced by the recurrence of "Fragments" themes in various guises here and there -- a solitary 40-second "Fragment," executed with stop-and-start precision by Bishop (on tenor), Cleaver, and supple bassist Tim Flood, reappears later as the launching point for five minutes of expressive pyrotechnics from the trio members on "Fragments in Imaginary Time," a disc highlight. Meanwhile, the two parts of "(Shattered Fragments)" are brief vehicles for clarinet, bass, and drums to break the "Fragment" into smaller shards of sound, and "Fragments on a Curve, to Find" twists the theme into yet another shape, stated principally by Flood as Bishop gently swoops and flutters above on soprano. As an additional wrinkle, Bishop sequences the "Fragments" inventively, hinting at the theme in an early context and revealing it more explicitly later. This and the disc's quieter, spacious, and exploratory interludes can lead to some pleasurably deep listening, but Time & Imaginary Time can whomp you on the head even if you aren't paying close attention, as the trio burns through a funked-up uptempo cooker like "Get It!" (exclamation point entirely appropriate) and the aforementioned "People's Republic." Meanwhile, the paradoxically ultra-tight and free-flowing "Picking Up the Pieces" benefits greatly from Flood's in-the-pocket basswork and Cleaver's ability to conquer even the most challenging rhythms. Bishop, Cleaver, and Flood have been intermittently active in Ann Arbor since the late '90s, weathering even Cleaver's move from Michigan to become an in-demand drummer on the New York City creative jazz scene. So they are far from strangers to one another, and the nearly telepathic communication heard during this disc's improvisations attests to that fact.

As for Bishop himself, the reedman can be heard as a bandmember on releases by Ann Arbor jazz stalwarts like pianist Ellen Rowe, guitarist Carl Michel, and flügelhornist Ed Sarath, and thanks to Envoi Recordings his projects as leader are finding their way to CD circa 2005. More Bishop recordings can be expected, and on the basis of Time & Imaginary Time creative jazz fans have much to anticipate.


Andrew Bishop is a composer and improviser in highly diversified musical idioms. As a composer he has received over 20 commissions from professional organizations and universities, numerous residencies, and recognition and awards from ASCAP, The Chicago Symphony Orchestra, the Andrew W. Melon Foundation, and a nomination from the American Academy of Arts and Letters. He leads a variety of his own ensembles and his two recordings as a leader Time and Imaginary Time and the Hank Williams Project (both on Envoi Recordings) received high praise from the New York Times, Downbeat, and All About Jazz, among others. He has performed with Karl Berger, Sandip Burman, Kenny Burrell, Eugene Chadbourne, Ray Charles, Gerald Cleaver, Drew Gress, Jerry Hahn, Chris Lightcap, Mat Maneri, Tony Malaby, Hank Roberts, Jacob Sacks, Craig Taborn, Clark Terry, Matt Wilson, and John Zorn among others.

Tim Flood is a bassist and composer based in Ann Arbor, MI. As a jazz bassist, he has performed with artists such as Uri Caine, Frank Lowe, Hank Roberts, Roswell Rudd and many others. His original electronic compositions and mixed-media installations have been shown at venues such as The Detroit Institute of the Arts, Pauline Oliveros' Deep Listening Space, and the Sync '05 Digital Art Festival. Tim recently completed a Masters Degree in Media Arts from the University of Michigan.

Blowing many minds is "Mag Mell" , an uncanny mini-album from the Tim Flood Quartet on Null Records . Flood plays bass and acts as a producer/arranger for these 7 short studies on the darker parts of spiritual jazz. Sounding like "Meditations" or "Ascension" style Coltrane on a serious death trip, cloaked in delay and a teeth-gritting look inward, Andrew Bishop plays horns (and some sick doomsday flute on the last track), Gerald Cleaver does the drums and Jacob Sacks plays piano that gets twisted into some hissing insect buzzes. The songs are mostly done in three minutes, trading the usual extended-form exploration of free jazz for a fragmented, highly edited bigger picture. The cover art (by Tom Hohmann from Mounds/USA is a Monster/Scheme ) makes it look like a commune psyche record, the thing plays on 45 and there's only a couple hundred floating around. Strange and beautiful, entirely.