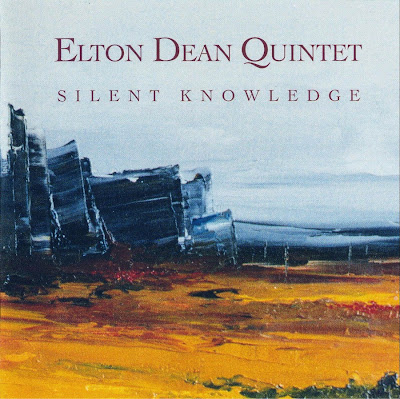 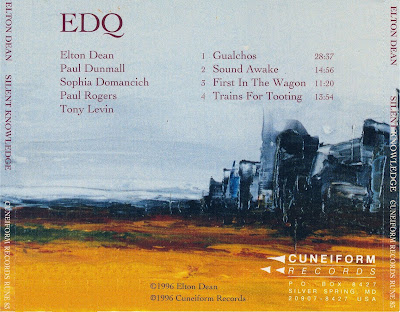 Yes, this strange lady is Sophia Domancich. The rest of band (uglier part) surely you know

Review:
Although Dean is titular head of the quintet, three-fifths of its personnel is made up of members of the Mujician group — Tony Levin on drums, Paul Rogers on bass and Paul Dunmall on tenor sax. Regular Mujician pianist Keith Tippett is replaced by Sophia Donmancich, who has a robust, two-handed attack, although perhaps less of Tippett's musical eccentricity. Dean plays his customary alto sax and saxello, no longer doubling on electric keyboards as he did during his early Soft Machine days. The long opening piece, "Gualchos," betrays a strong and not unwelcome Coltrane influence, beginning with the rolling thunder of Donmancich's piano, and then a solemn minor theme played by the saxes in unison. Everyone then has ample opportunities for soloing, with Dunmall's hoarse, impassioned tenor a highlight, along with a serpentine duet between the unaccompanied horns at the end of the piece. A subsequent ballad, "First in the Wagon," has Dean taking an initial lyrical solo, followed by Donmancich and then apparently by Dean again on his other horn. Very lovely playing, indeed. The remained two tracks on the CD are more in the mode of Mujician, going beyond the standard jazz format of theme and solos and into the more challenging world of collective improvisation where the musicians take turns following one another's lead and combine in temporary duets and trios, pushing the music in various directions. These pieces are abstract and sometimes abrasive, with fewer touchstones for the listener, but they offer substantial creative challenges for both listener and musician. Whatever the territory, this group of musicians traverses it with panache.


This is a studio album, concert version was prepared by Andy on Inconstant Sol blog. http://inconstantsol.blogspot.com/2013/02/elton-dean-quintet-1995.html