UBU Editions and Jazz Masters Presented ALVIN LUCIER : I Am Sitting In A Room (Placard II - 2007) 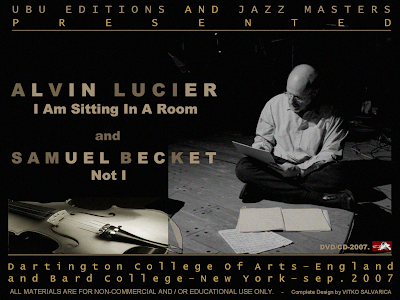 UBU Editions and Jazz Masters Presented – Placard II (2007)
ALVIN LUCIER – I Am Sitting In A Room (Different From The One You Are In Now)
and
SAMUel BACKET – Not I
In cooperation with: Dartington College of Arts – England and Bard College – New York, November 2007
Original Design by ART&JAZZ Studio SALVARICA – 2007
Artwork and Complete Design by VITKO


DIFFERENT ART (for those curious)

I am sitting in a room is Alvin Lucier's idea of pure sound experiments. Through playback and recording of successive generations of his own voice the sound is washed until his talking is a pure harmonic. The album starts with a relatively bland Lucier.."I am sitting in a room" but as the generations progress everything becomes a pure ambient. As Lucier suggests in the recording, this sound is the dynamic of the room he records in. It is released in two parts on well pressed vinyl.

This record was made by the composer on October 29 and 31, 1980 in the living room of his home in Middletown, Connecticut. It consists of thirty-two generations of the composer's speech and was made expressly for this Lovely Music record. Photography is from the original Polaroid Image Series by Mary Lucier. 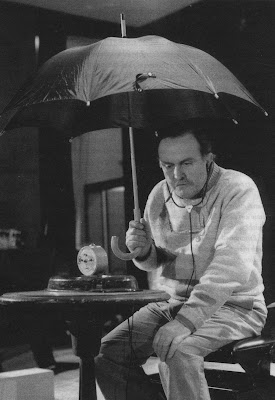 Alvin Lucier
Look on Youtube:
ALVIN LUCIER – I Am Sitting In A Room
http://www.youtube.com/watch?v=2jU9mJbJsQ8

The original 1969 recording: Alvin Lucier: I am Sitting in a Room (1969)
http://toddtarantino.com/hum/lucier_iamsitting.html