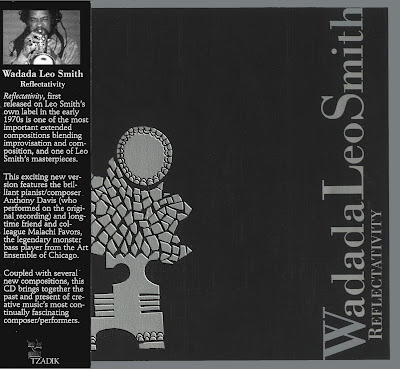 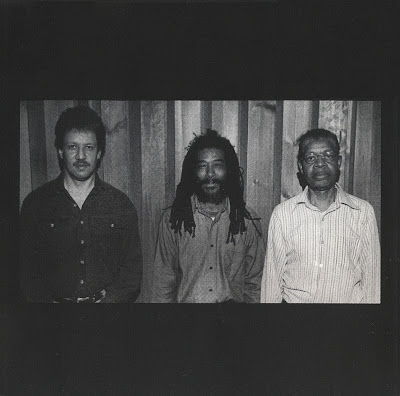 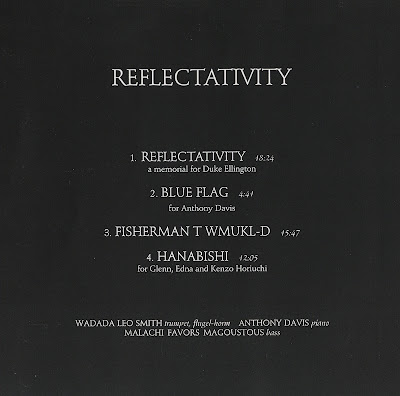 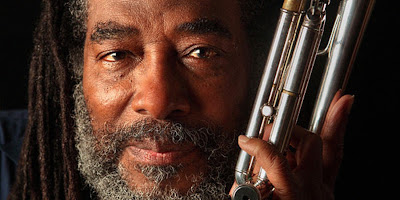 This new version of Wadada Leo Smith's classic Reflectativity from 1972 -- now a memorial for Duke Ellington -- shows his compositional strengths as fully developed, even at that time. Yet, in this piece, he reworks his own notation to open up his lyrical side over his improvisational dimension. His unusual notation -- which resembles Anthony Braxton's of the period and later -- was actually a system being worked out over the range of multi-tonalities and improvisational possibilities within the erected framework. In this manner, where mode and harmonics establish a base and architecture, lyrical invention and dissonance find room to extend the original line and idea from both above the meter and below. Rhythm becomes an idea and a question within these contrasts, and is resolved by the rhythm section (sans drums). For his collaborators on this date, Smith relied on the tried and true talents of old friends: pianist/composer Anthony Davis and bassist Malachi Favors Maghostus. Over 18 minutes, the piece unfolds an interior world where sound, image, and ambivalence encounter what is unknown in musical language and attempt to deal with it -- if not resolve its issues. And this is the case with the other three compositions on this set. Smith looks for a way into a place where his written score breaks itself and, at that point (listen closely to the end of the first four minutes of "Fisherman T WMUKL-D"), music begins to present itself to the trio as a field of language to develop and systemize according to the strengths of each individual improviser -- all of whom are responsible for the restraint necessary to allow each of the other members to find his place in that system while erecting their own in relation to the work. Jazz and blues provide some hint as to where that language should come from, and European classical music where it may have tried to go and failed miserably; theatrical music (or musical dramatics) is another source, but none holds the entire root language (contained within the developing system itself and opening onto another field of language -- not of music, but of sound and color). The swinging opening theme "Hanabishi" illustrates this, where quotes from Thelonious Monk are juxtaposed against children's themes and "Revelie" on the trumpet. Next, Smith moves into Miles Davis' mid-'60s modalism in search of a key to leave the building he created. Davis is pushing at all the windows and doors, Maghostus burrowing into the floorboards, and Smith going right for the attic. They meet in midair, where all of them realize that the space inside is far bigger than it is outside. It's not physically possible to be sure, but sonically, there are no limits to inner space; equations don't have to add up to a squared whole. Hence the piece moves, bounces, and wends its way not so much horizontally but vertically, carving out a music from the air; intersections and reverberations become the same thing in a non-meat terrain where Fats Waller can meet Bach's Fugues and Cage's "Atlas Eclipticalis." Smith's Reflectativity is easily his most adventurous and consistent album since 1979's Divine Love. 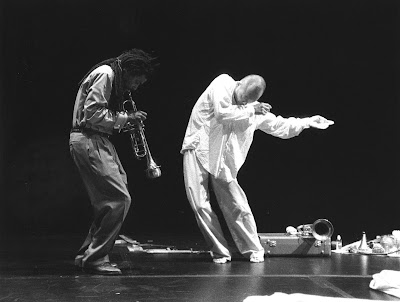 NOTAWAY: Quest for Freedom , a major new evening-length work by dancer- choreographer Oguri with music by Wadada Leo Smith , he had its world premiere with four performances at Electric Lodge on March 1-3, 2013 as part of Body Weather Laboratory ’ s Flower of the Season 2013 series. Inspired by the quintessential American novel,Adventures of Huckleberry Finn by Mark Twain, NOTAWAY is a complex, multilayered work blending choreography and musical compositions with improvised music and dance. The international cast includes Oguri and Japanese choreographer Yasunari Tamai along with composer-trumpeter Wadada Leo Smith and his Golden Quartet featuring Anthony Davis on piano, John Lindberg on bass, and Pheeroan akLaff on drums. Morleigh Steinberg created the lighting design and is artistic supervisor.