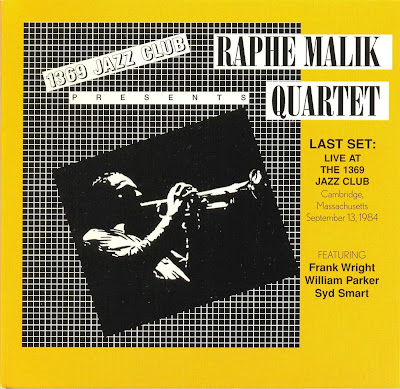 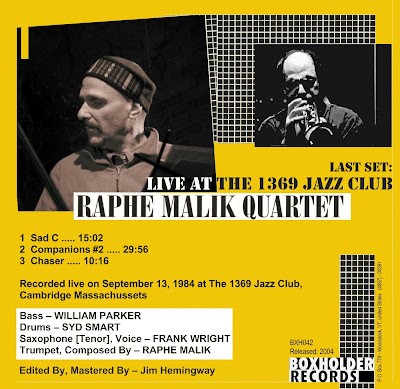 The release of Last Set: Live at the 1369 Jazz Club apparently helps to fill a huge hole in the discography of trumpeter Raphe Malik, a free jazz stylist whose improvising as well as manner of presentation are perpetually personal and fresh, a far cry from mindless conformity and a handy weapon in weeding out such attitudes. The wimps will have fled home for what is sometimes called "the late night hipsters' set." Anyone still left is either seriously interested, too deranged to worry about, or a drug dealer, sometimes all three at once. Even if Malik had been releasing lots of new material circa 1984 this would still be a valuable recording, one that ought to make even the seasoned free jazz listener stomp his foot in approval. Malik's name became known through his playing with pianist, bandleader, and perpetual machine of dynamic motion Cecil Taylor. The trumpeter's use of energy is much different than his old keyboard-stomping boss, but he certainly learned much about the slow, even, and subtle creation of an inferno. The live set from a club in Cambridge, MA, adds tenor saxophonist Frank Wright to the regular trio of Malik, bassist William Parker, and drummer Syd Smart. This is a terrific rhythm section, no question about that, and more on them later -- but first a righteous tip of the hat to Wright, a player whose presence on a date inevitably means much fun is to be had.


Some aspects of this Wright appearance are typical, some not. His name often goes hand in hand with recordings that audiophiles would consider to have inferior sound quality. Indeed, no appraisal of Wright's contribution to the recorded library of jazz would be complete without listening to several albums where distortion is so great it sounds like he screwed his reed to the microphone rather than the saxophone. The problem with the recording here is a kind of distant sound, this obviously being documentation created by somebody sitting in the audience. This sound should actually grow on the listener as the set proceeds, as if the musicians were listening to the playback on headphones at the time and making suitable adjustments in dynamics and tone. Boosting the bass range on playback equipment as well as punching volume boost buttons and the like are sure to be a great help. What makes this performance different than various sets under Wright's name, such as the Center of the World series, is that he expertly transforms his style in collaboration with Malik. He is still incendiary, eccentric, and groovy; he just dials the anxiety level down a notch to provide the trumpeter with a more relaxed foil in the front horn line. Wright also sings a lot, an uninhibited contribution that superficially seems to get lost due to a lack of balance in the recording. What actually happens is that Wright's singing is at quite a subtle volume during episodes where it is not expected. Vocalizing of this sort may be quite typical during really intense parts of free jazz performances -- sections of John Coltrane's Live in Seattle come to mind as does the marvelous word "caterwauling" -- but here Wright is singing during a drum solo, for example. Considering that it is the last set of the night, the singing sometimes sounds like it might be coming not from the stage but from one of the previously mentioned audience members. The effect is unique and wonderful. The lo-tech "mix" that makes it sound this way is an accident, but who cares?

"Sad C" seems like a warm-up despite its length of 15 minutes, albeit a necessary one; this is the start of the set, and Malik seems to be wandering down hallways, then poking at simmering garlic cloves with a wooden spoon. "Companion #2" is next, just shy of 30 minutes in length and an episodic rave-up. Wright makes brutal decisions; Smart tosses out accents and addenda, a stylistic arsenal that sounds like no other drummer. Parker plays the first of two superb bass solos -- this one is bowed, and for the finale of "Chaser" he plucks, appropriately, since R&B and rock & roll seem to be on the minds of Wright and Smart. They are indeed right and smart in their attitudes, this track comparing favorably with similar performances by the likes of Frank Lowe or the Human Arts Ensemble. There is only one reason jazz listeners would want to skip this CD: they would have to want everything to sound like Rudy Van Gelder recorded it.
_ AMG