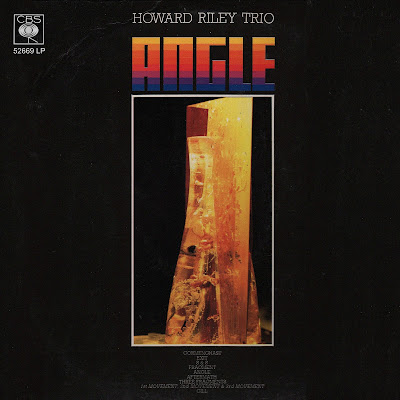 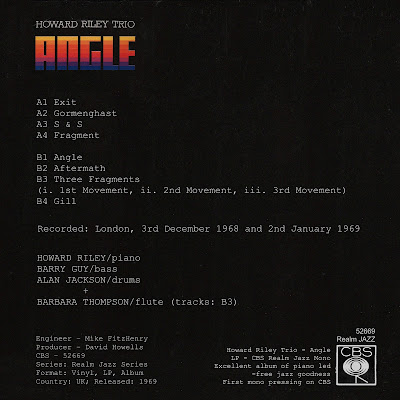 Another piano-dominated trio album, Angle is definitely one of the more accessible of Riley ’ s works in that period of time. Working again with Barry Guy on contrabass, it is Alan Jackson that occupies the drum stool, and we have Barbara Thompson tooting the flute on one track. Not sure what the object of the artwork is, but it ’ s kind of fascinatingly warm and represents well the music inside the sleeve. The opening Exit (no joke) is actually fairly accessible (for Riley ’ s standards), but Gormenghast is more of a challenge with Guy ’ s almost violent string thumping all over his contrabass ’ fretboard, but the closing minute is rather pleasant, and (dare I say it) almost melodic. However the thankfully-short S&S is definitely not of the same mould with its highly dissonant improv. Fragment almost picks up where Gormenghast had left things at, than the gentle piano softens much of the bass and drums improvisations, and Riley ’ s key tickling has many endearing sometimes-Tyneresque moments.

On the flipside, the title track features Barry ’ s bowed bass that brings an exquisite touch at first, but then goes wild in its plucking before returning to its bow and Riley ’ s piano rambling on with much inspiration, and the track veers almost violent. Good stuff, too! The following Aftermath is a highly energetic piece (but all-too short) where Riley ’ s Tyneresque piano glides over an awesome bowed contrabass, giving a semi-raga feel, and making it the album ’ s highlight. The three-part Three Fragments is just that, with Thompson ’ s slightly dissonant and shrieking flute is the main protagonist, with Riley ’ s piano playing second fiddle. The closing Gill is one of the album ’ s more difficult moments in terms of dissonance, but to give you an idea, this would be the most accessible on the future Flight album. As for Riley ’ s works, it is difficult to recommend one album, but should you want to explore his realm, you might want to start with Angle, and if you can digest the more dissonant tracks on it, then you might just be ready for other works of his.