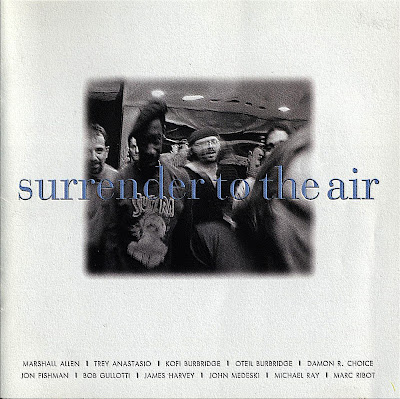 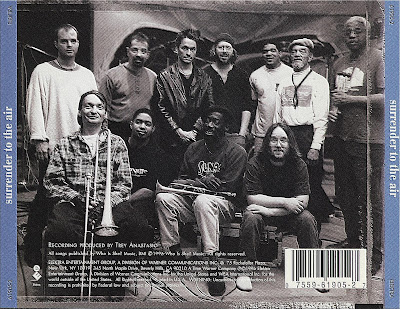 A colorful exploration of sound, texture and space, featuring long sections of free group improvisation connected by short segments conducted by Trey Anastasio. Dense, noisy, aggressive, sparse, etherial, and beautiful; this album shows Trey in a new light as the catalyst and performer of intensely energetic and personal music.

Surrender To The Air is the result of good timing and luck. With a short break from touring with Phish, and some available studio time at his disposal, guitarist Trey Anastasio assembled some of his favorite players for a two day, free form recording session. The group, a veritable who's who in the world of jamband improvisers and eclectic free form jazz, laid down many many hours of jams onto tape before it was all over. After some editing and shaping the result would be the group's only album release ..., which proved to be confounding to Phish fans and a challenge to music lovers with even the most attuned jazz ear. The band convened for a pair of performances at the Academy of Music in New York City in April of 1996 which featured guest performances by various Sun Ra alumni and Phish keyboardist Page McConnell. While various members have expressed a desire to get together for more appearances, the challenge of gathering the 11 members together for an encore has so far not been met.

Trey’s first official side project from Phish found him exploring free jazz. Surrender to the Air was a colorful exploration of sound, texture and space, featuring long sections of free group improvisation connected by short segments conducted by Trey. The group produced one studio album released in March of 1996 followed by two live performances at the Academy in New York City on April 1st and 2nd, 1996.

In Trey’s words: “It was very loose. Everybody was just set up in the room, and you’d just come and go as you please. Sometimes it broke down to just two people. Most of the session was spent doing free stuff. [But, he adds,] The sound I wanted was free form and the structure I wanted was structure. It was basically a matter of figuring how to get both of those things. The problem that I don’t like about most free-form things is that it meanders. And to my ear, this doesn’t meander; it has direction all the time. It keeps going down a course ”

2
Since guitarist Trey Anastasio is the leader of Phish, it would seem that he would sound nearly identical to his band when he's on his own. Not so. Surrender to the Air, his first solo release, recalls a free form, improvisation-based jazz record more than hippie rock; in that sense, it is close to the actual spirit of the Grateful Dead, if not their sound. Anastasio has assembled a diverse, experimental band featuring guitarist Marc Ribot, trumpeter Michael Ray, keyboardist John Medeski, and saxophonist Marshall Allen. With such a stellar cast, it isn't surprising that Anastasio lets his fellow musicians cut loose. Everyone improvises over a loose structure, disregarding conventional notions of melody or rhythms. Though Anastasio doesn't solo as much as some of his comrades, his open-minded spirit is evident throughout the record. Though many Phish fans might not initially enjoy Surrender to the Air, the guitarist should be commended for not resting on his laurels.