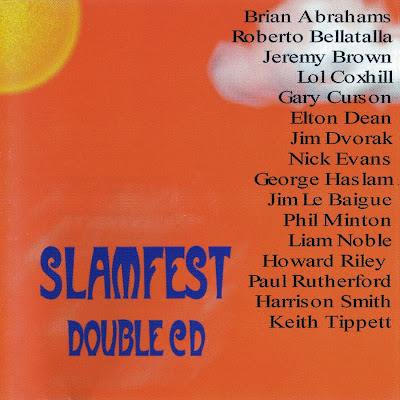 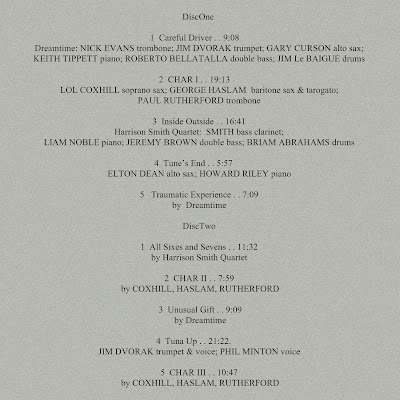 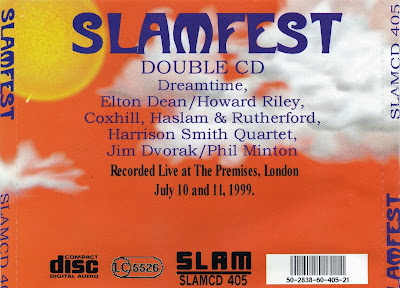 This first SLAM CD release for 2000 is a live recording of the two nights of music played at The Premises, London, July 1999 to celebrate the tenth year of SLAM CDs. The line up presents an impressive array of musicians prominent on the British improvising scene - most of which have appeared on previous SLAM releases. The recording is another example of the impressive abilities of soundman Dill Katz. The music by five different groups fills two CDs; the double CD package is offered at the same price as a SLAM single CD.

The artists who participate on this two-CD set, recorded live at the Premises, London July 10 and 11, 1999, read like a who's who of British modern jazz/improvising superstars. Here, legendary saxophonists Elton Dean and Lol Coxhill, trombonist Paul Rutherford, pianist Keith Tippett, vocalist Phil Minton, and others of note perform within various aggregations or subgroups on this rather multifarious affair. Basically, these performances should whet one's musical appetite, whether they are Tippett's sweeping arpeggios and fervent right-hand leads on the piece titled "Careful Driver," or Coxhill, Rutherford, and baritone saxophonist George Haslam's frisky interplay and converging statements on the 19-minute work "CHAR I." Other highlights include: a spirited duet, marked by counterbalancing themes between pianist Howard Riley and alto saxophonist Elton Dean, while "Tuna Up" features trumpeter Jim Dvorak and Phil Minton embarking upon an often humorous journey, thanks in part to Minton's frantic, scat-like vocalise and the twosome's altogether enticing exchanges. Ultimately, there's quite a bit to digest here, as the musicians toggle between modern jazz- style interplay and cunning improvisational tactics, atop richly thematic lyricism and blues- drenched choruses.