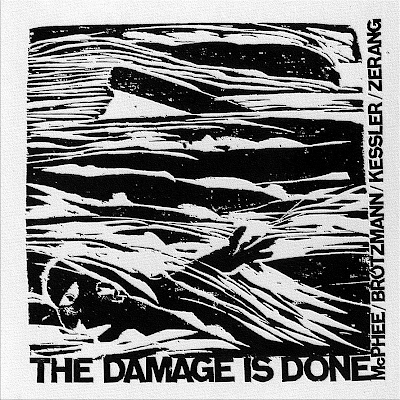 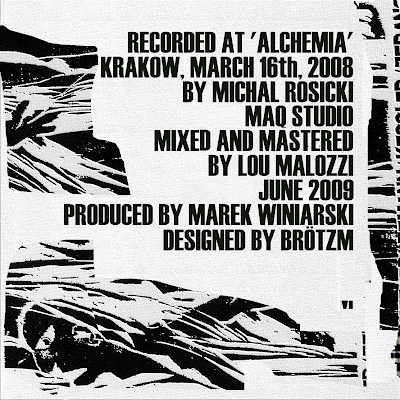 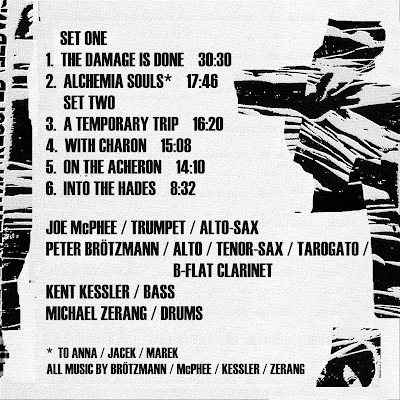 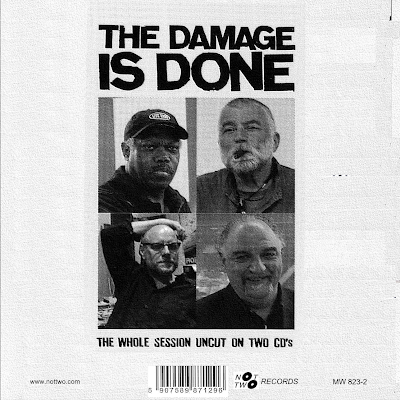 As they have in the past while touring with the Tentet, they step away and perform in this more intimate lineup. This quartet has released two previous recordings, Tales Out Of Time (hatOLOGY, 2004) and Guts (Okka, 2007), with The Damage Is Done's two discs recorded live at Alchemia in Krakow, Poland in March of 2008.

While the players can (and do) perform volatile energy jazz here, their preference is for music that's dissectible enough for the players to be distinguished in parts and direction.

The obvious reference point here is the legend of Albert Ayler and his brother Donald. Brötzmann has never shied away from his admiration for free jazz's holy ghost. With Brötzmann on tenor and McPhee sporting the trumpet role, the attention to Ayler can be heard on "With Charon" and the title track (all 30-plus minutes). Brötzmann and McPhee's stamina, both nearing 70, is impressive. The pair delivers an onslaught of energy with a relentless attack, the only pause being for Zerang and Kessler's solos. With that, the pace slows, allowing Brötzmann to paint from a different palette. This gentler approach acts as a collection point before the music again spreads its energy patterns outward.

Kessler and Zerang open "Alchemia Souls," with itchy bowed bass and sound effect brushes on drums. Brötzmann enters, playing a persistent tarogato before McPhee's twitchy alto joins. The rhythm section maintains the energy through constant motion. The more affable music making here comes at the urging of the rhythm section. Slowing down the pulse or playing with mallets coaxes the horn players to decelerate and clarify the sound.

The breadth and power of these four players comes through with an exhaustive clarity in this crisp and vigorous live recording.


The reason why Joe McPhee and Peter Brötzmann form a great horn section is because their styles are linked and still quite different. McPhee can be violent and fierce, but he has that touch of sentimentality - in the good sense of the word - and spirituality that is entirely lacking with Brötzmann. The latter is a force of nature, all power and energy, but he has his poetic side too. Besides the violence, they share technical skills, musical vision and first and foremost instruments that are a direct conduit to their feelings, unaltered, without embellishment, without unnecessary ornaments or fake feelings. They deliver directly : raw, authentic, true to themselves. Ken Kessler on bass and Michael Zerang on drums feed the hurricane that is blowing in front of them, relentlessly.

But the hurricane can become a light breeze too. And that is to a certain extent largely to be ascribed to both McPhee and Kessler, who add more nuance and subtlety, melodic elaboration and lyricism, but don't get mistaken about Brötzmann either: the slow and very beautiful melody that he develops in the quiet middle part of the thirty-minute title song is entirely his, almost sounding like McPhee. It is a real pleasure how the German manages to find the common ground, but don't worry either, it doesn't take long before he blows his lungs out again, so much so, that it almost becomes an entertainment by itself. The second track, "Alchemia Souls", is more free improv, a sound dialogue between the four musicians, and the title refers to the Alchemia Club, in Krakow, Poland were the performance took place on March 16, 2008.

The second disc is even better, with titles referring to the descent into the Greek underworld. Soft and poetic flowing passages alternate with gut-wrenching sound blasts and the most excruciating emotional explorations - after all: you are in hell, yet it all fits, it has coherence and purpose, indeed like Acheron, the river of pain, that flows through Hades. Anger, human misery, dissatisfaction with the world, yes. But also musical beauty and great artistic delivery, very balanced in a very varied performance.The only downside of the performance is that Brötzmann's sax comes across much louder than McPhee's, but whether that's a question of sound mixing or because of sheer decibels produced, remains unsolved.