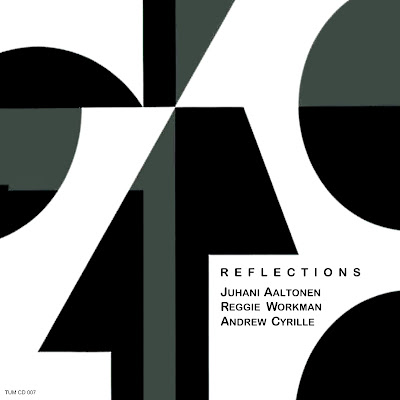 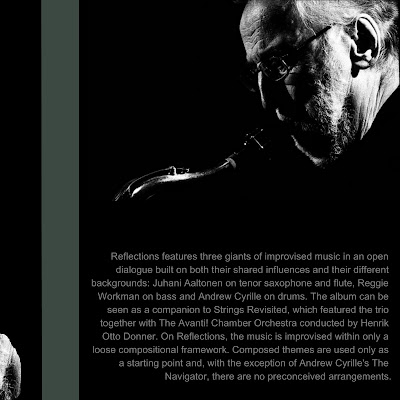 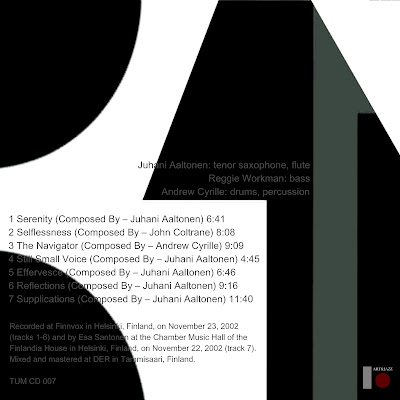 This Finnish saxophonist and flutist is largely associated with the fusion jazz efforts of bandleader Edward Vesala. Juhani Aaltonen began playing professionally in the late '50s and, by 1961, was somewhat of a veteran at the numerous dance gigs his fellow countrymen used to keep from freezing to death. One of his first professional jobs was in a sextet led by trumpeter Heiki Rosendahl. More serious matters on his mind, he began studying the classical flute at the Sibelius Academy, then came stateside for a stint at the Berklee College of Music in Boston. At this point, he was heavily influenced by John Coltrane and was leaning toward the free side of things, as in free improvisation and free jazz. Berklee did not round this up to a threesome and offer free tuition, however. Soon after returning to Finland, he made the jump to the big city, in this case Helsinki. There he found plentiful work as a studio hack, but was also making a name for himself on the jazz scene. It was certainly the ground floor for jazz-rock and fusion experiments, and while American artists such as Miles Davis led the way, there was much interesting music in this idiom coming out of all parts of Europe, as well. He began a successful collaboration with Edward Vesala, in the beginning involving long duo sessions. Aaltonen blew in the jazz-rock outfit Eero Koivistoinen, also laying down his first creative recording tracks in his stint with the band. He worked with this group off and on for the next four years, but the association with Vesala was also going on during this entire period. A fellow Finn, the percussionist and composer Vesala was actually the younger man by a decade. Because of this bandleader's success at cracking the international fusion jazz market, these recordings remain Aaltonen's highest profile work. A recording with the big band of Thad Jones and Mel Lewis represents even further mainstream jazz identification, although the jazz-rock ethos made an impact on this band as well after the '60s. The recording does not provide Aaltonen with much soloing space, however. He recorded with Heiki Sarmanto in 1969 and 1972, and from 1974, concentrated his energy on his efforts as a leader. He released his debut solo album, Etiquette, in 1974. In 1975, he was a member of Helsinki's New Music Orchestra. The Nordic All Stars have of course called on Aaltonen, and he has worked with the quartet of bassist Arild Andersen in the late '70s and with the hearty German saxophonist Peter Brötzmann. Aaltonen nabbed a lot of studio work in the '80s and also toured Europe with Andersen, regularly appearing on albums. The UFO Big Band project allowed him a regular solo spotlight in this period, putting him in the company of both Jan Garbarek, perhaps the most famous Scandinavian reed player, and Charlie Mariano, a bop-era saxophonist who expatriated to Europe. In the mid-'80s, something of a dream for any musician came true for Aaltonen when he received a 15-year state grant, again allowing him to concentrate on his own projects. Spirituality began to be a strong influence and he began to perform more frequently at church concerts and related events and much less at rowdy jazz- rock gigs. In the '90s, he presented a remarkable solo flute recital at the Tampere Biennale and returned to the collaboration with Sarmanto. In 1990 and 1992, Aaltonen toured with his own quartet. "For me life is an ongoing school and I am an enigma even to myself," is an example of Aaltonen's philosophy as provided by the Finnish Music Information Centre, the enigma compounded by the Centre's assertion that this comment was made on the musician's "150th birthday." In 2000, the duo of Aaltonen and Sarmanto released their most successful venture together to date, the duo recording Rise.

The six pieces on this album turn the extroverted expressiveness of free jazz into an introverted study of quiet intensity. Recorded during a 2002 visit to Finland by Cyrille and Workman that also produced the chamber orchestra collaboration of Strings Revisited , Reflections showcases three mature voices of free jazz ’ s first wave. Their mutual respect shows in the ample room each gets to mold the trio ’ s improvisations, giving the music an expansive, exploratory atmosphere.
Five of the seven tunes are Aaltonen ’ s, and they lean towards wandering lyrical journeys. The ballad “ Serenity ” simmers with Aaltonen ’ s smoky, raw tone and Cyrille ’ s shimmering cymbal backdrop. “ Supplications ” pulls the spiritual weight of a Coltrane dirge, the trio ’ s voices merging in an impassioned cross talk. Workman first bows, then adds thick, picked phrases, Cyrille points out multiple rhythmic directions on snare and cymbal while Aaltonen unwinds long strings of husky, rasping tenor sax.

But it is Aaltonen ’ s flute that provides the album ’ s most meaningful moments. On Cyrille ’ s suite “ The Navigator, ” his full-bodied tone and heavy vibrato gives the melody lonely immediacy, contrasting sharply with Cyrille ’ s low-key march and Workman ’ s piercing upper- register stabs and double-stops. Workman underpins the second part with a cyclical, swinging 6/8, and Aaltonen shows a more rhythmic, though still melodic side. “ Still Small Voice ” again features Aaltonen, this time darting in and out of Workman and Cyrille ’ s fragmented pulse.

But the real proof of this group ’ s maturity and inventiveness is “ Effervesce, ” a tune that embodies its title. Aaltonen sets the pace with a rapid, stuttering fragment, like a bebop phrase set free from its harmonic foundation. Cyrille at first colors with shakers, a gong and glass bottle, then falls silent for Workman to enter with a churning pulse. When Cyrille re-enters, he brings the trio to a rolling boil. Just when you think they will ascend to a full out peak, Workman takes a bowed solo that is a smear of upper-register clusters and percussive beating. They create the feeling of freedom, but with an unfelt craftsmanship.
On Reflections Aaltonen, Workman and Cyrille demonstrate that free music and lyricism are not mutually exclusive ideas. By using a restraint learned from experience, they show that intense introspection can generate as much raw emotional impact as the most explosive expression.


While bassist Reggie Workman and drummer Andrew Cyrille are famous in advanced jazz circles, Juhani Aaltonen is lesser known despite being a veteran. Based in his native Finland, Aaltonen has long been one of the leading lights in Scandinavian free jazz. He has also performed religious music and orchestra works. His collaboration with Workman and Cyrille, despite having some very fiery and explorative moments, emphasizes ballads, lyricism and spiritual moments. While Aaltonen sometimes hints at John Coltrane (including not-too- surprisingly Trane's "Selflessness" and the opening "Serenity"), his flute playing has no obvious past role model. Taking its time, this is very much an ensemble music with Aaltonen being the lead voice among equals. It has a quiet strength all its own and grows in power and purpose with each listen. Recommended.