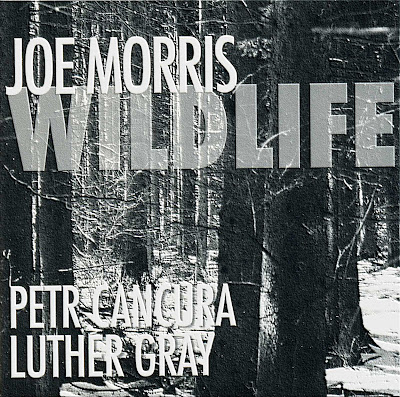 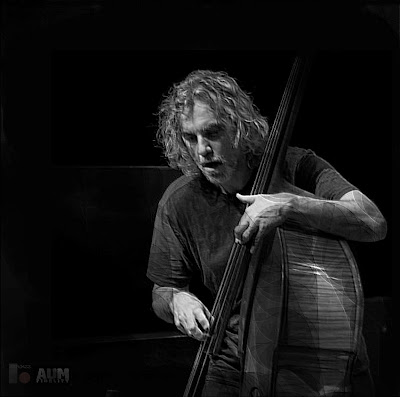 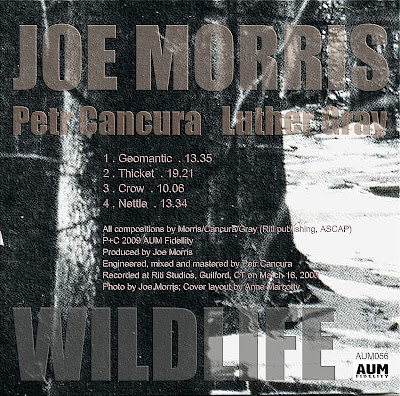 It is extremely rare to have a record start with a three-minute drum solo, as an introduction for an uptempo free bop power improvisation by a trio. The band is Joe Morris on bass, Petr Cancura on sax and Luther Gray on drums. "Again?", you might think and you think right. No later than two months ago the almost same trio already released an album, "Fine Objects" on the Polish Not Two Records, only the drummer is different. And whereas the previous album still contained some composed material, the music is more free, more improvised, but as boppish and as likeable. Gray and Morris take care of the drive and the forward motion, Cancura keeps the attention going with his powerful and sensitive playing. The second piece "Thicket" made me think more than once of Ethiopian composer and vibist Mulatu Astatqé, not only because of Cancura's longing and very melodic development, but also because of the more expansive rhythms. Regardless of the influence, the piece is a pure beauty. The third piece "Crow" is more spiritual and bluesy, slow and deep and emotional and soulful, keeping the deep essence of the tradition, but packaged in a more modern and free way. The album ends with the upbeat "Nettle", uptempo and boppish again, full of great playing by all three musicians, and again, as unpretentious and musically honest as their previous release. Luther Gray is great. Morris as unpredictable as ever - and I always welcome his lyricism on bass. Cancura is a guy to watch. Enjoy!


Widely revered in avant-garde music circles for his innovative approach to the electric guitar, Joe Morris' decision to take up the contrabass in 2002 was initially met with apprehension from certain corners of the new music community. Fears that the singular guitarist might disavow his primary axe have been dispelled, replaced by a burgeoning parallel discography charting Morris' remarkable growth as a bassist.

Wildlife is the most recent document of Morris' increasingly impressive bass prowess and his first release for AUM Fidelity since 2001's solo guitar recording Singularity. For this freewheeling trio session, Morris partners with Luther Gray, his preferred drummer since 2002. A ubiquitous member of the Boston-based jazz scene, Gray's nuanced abilities have blossomed considerably since his seminal work in the late eighties Washington D.C. punk rock scene.

A former student of Morris, saxophonist Petr Cancura is a rising presence whose sideman duties have included stints with Rakalam Bob Moses and Danilo Perez. Originally from the Czech Republic, the current Brooklyn resident has recorded a number of sessions with Morris, including Fine Objects (Not Two, 2009), a trio date with drummer Jason Nazary. Wildlife deviates from the previous album's reliance on originals and standards, braving more adventurous territory over four lengthy free improvisations.

The trio embraces a wide range of spatial dynamics on this expansive set, with the majority of their probing explorations conjuring the bristling frenzy of New Thing era expressionism. Cancura's vocalized phrasing, brisk intervallic runs and brawny timbre invokes such giants of the genre as Ayler, Coltrane, Sanders and Shepp. A singular stylist, Cancura's assimilation of his forbearers' innovations is seamlessly integrated into his own uniquely lyrical approach to alto and tenor—a kinetic attack buoyed by a pungent tone.

Gray's bustling percussion provides the trio with a malleable rhythmic foundation, ably demonstrated by his extended work-out on the rousing post-bop excursion "Geomantic." Navigating capricious shifts in meter, tempo and volume, Morris displays his burgeoning virtuosity with stalwart flair. His extended solos on "Thicket" and "Nettle" reveal a composer's awareness, alternating oblique harmonic variations with percussive invention. Drawing from both Eastern and Western traditions, his bright, guimbre-like pizzicato lends a lilting North African modality to "Thicket," while his laconic phrasing on the introspective ballad "Crow" ebbs with blues feeling.

The trio's congenial interplay is superlative, whether careening through the quicksilver changes of "Nettle" or extrapolating the somber motifs of "Crow." A compelling document of the saxophone trio tradition as a democratic exchange of ideas, Wildlife presents three masterful improvisers at the top of their game.