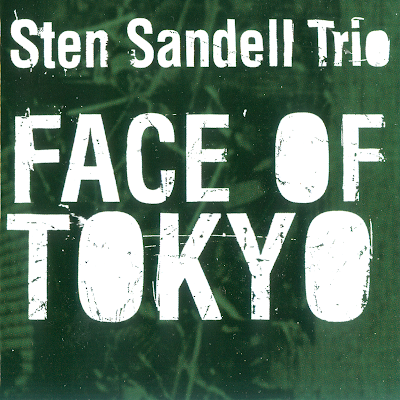 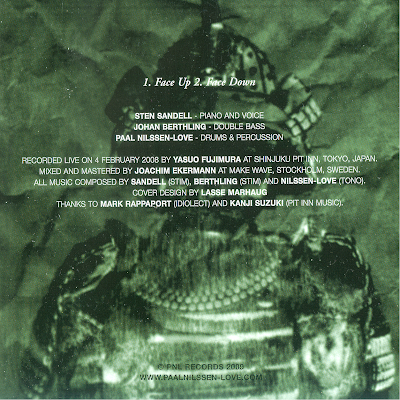 Sten Sandell Trio´s album is out on Paal Nilssen-Love´s record company PNL. "Face of Tokyo" (PNL 004, 2009) is 70 minutes of hot improvisation (2 tracks), recorded in Tokyo in February 2008. The trio is Sandell himself (piano, voice), Johan Berthling (bass) and Paal Nilssen-Love drums. Sometimes I think I hear a koto in here, but I guess it´s just Sandell inside the piano. Some guttural singing and samurais on the cover, adds an eastern feel to the album. Play loud, and enjoy. 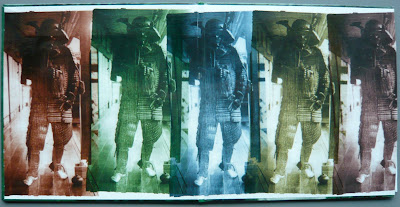 "Released on drummer Paal Nilssen-Love's own PNL label, the trio further consists of Sten Sandell on piano and Johan Berthling on bass. Recorded live in Japan in 2008, the album consists of two tracks: "Face Up", and "Face Down", for twice more than half an hour of quite intense musical explorations. The first track is a high energy work-out, the second starts with counter-rhythmic percussion, full of explosive power and creativity, Berthling joins on bass, first plucked, and when Sandell joins he moves to arco, while the pianist plays some eery chords, gradually driving up the tempo and energy level for again a dense improvisation, that suddenly collapses for some minimalist interaction, with all three musicians exploring the more uncommon aspects of their instruments. In stark contrast to some of the other albums below, the album demonstrates that technical mastery and musical vision make it possible to bring depth and emotional drive even with the most common of all jazz line-ups."