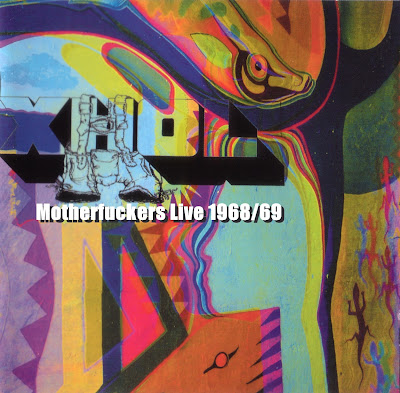 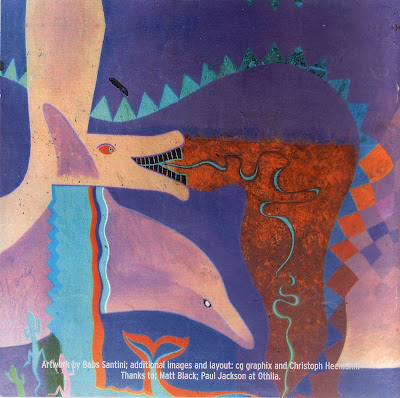 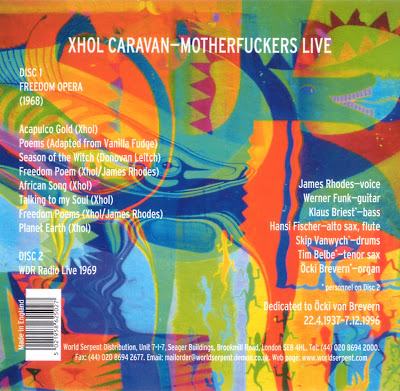 Originally reissued on the United Dairies label as a double cd and sinlge cdep, motherfuckers live contains the first recordings to be released by krautrock pioneers Xhol Caravan since 1970. This double lp contains two entire concert performances from 1968 and 1969. The first lp features the only existing recording of the Xhol Caravan “ Freedom Opera ” , which was planned as an album release but never realized in the studio. The second lp, recorded for german radio in Cologne, shows a different side of the line up.

The short-lived Xhol Caravan was one of the earliest underground Krautrock groups, and their unique fusion of jazz and rock was a precursor to the direction that Embryo, Out of Focus, Missus Beastly, Thirst Moon, Ikarus, Kraan, Vita Nova, Manju and countless other German groups would take in the 1970s. Formed by saxophonists Tim Belbe and Hansi Fischer, the group started out in 1967 under the name "Soul Caravan". With a Motown- influenced bassist as well as two African-American vocalists, James Rhodes and Ronny Swinton, the group made competent but conventional R&B and soul music, even doing covers of Sam & Dave. Later that same year they released the record Get in High on CBS. By 1968, after several lineup changes, their sound began to develop into a more distinct blend of psychedelic and progressive rock and free jazz, with a wide range of influences, including the Soft Machine, Pink Floyd, Vanilla Fudge, Jimi Hendrix, Frank Zappa, Albert Ayler and Peter Brötzmann. Eventually the group coalesced with Belbe, Fischer, Rhodes, Klaus Briest on bass, Skip Vanwych on drums, and Ocki Brevert on organ. At a performance of Dave Brubeck's "Take Five" guitarist Werner Funk joined the group on-stage and stayed with them until the next year. Their live shows often consisted of long free-form jams, with a lot of experimentation and improvisation and a heavily drug-influenced vibe. In early 1969 they changed their name to Xhol Caravan to release a single "Planet Earth"/"So Down" on the Hansa label and then later that year, after both Funk and Rhodes had departed, they released the strange and excellent LP Electrip, one of the earliest Krautrock albums, also on Hansa. Xhol Caravan were a popular group at the time, constantly gigging and playing festivals, and even appeared live on WDR Radio that year as well as on television with Frank Zappa, Tangerine Dream, and Amon Düül II. Fischer left the group before the end of the year, and the band eventually shortened their name to Xhol to avoid confusion with the British group Caravan. More studio and live material was recorded that year, though the group was unable to release any of it until they signed on with the legendary Ohr Records. In 1971 Ohr released the LP Hau-Ruck, taken from a couple live jams in early July 1970. The following year the LP Motherfuckers GMBH & Co KG came out, with both live and studio tracks, also recorded in 1970 and also on the Ohr label. Xhol unfortunately disbanded at about this time. In 2001 United Dairies released Motherfuckers Live, a two-CD set of live Xhol material from 1968 (when they were still Soul Caravan with James Rhodes on vocals) and 1969 as an instrumental four-piece.