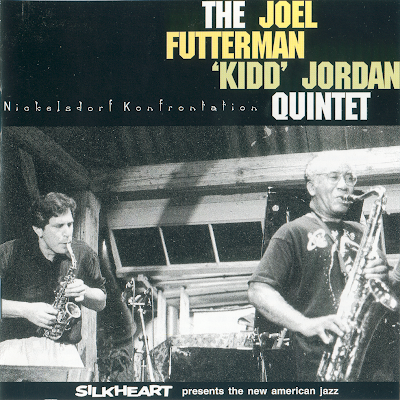 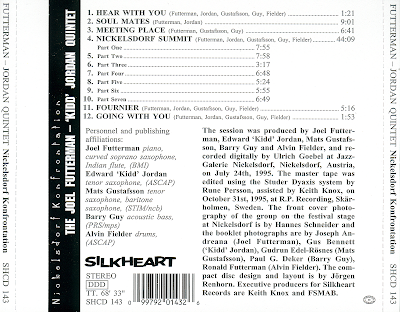 Nat Hentoff wrote the following in his liner notes for Joel Futterman's 1984 album, Inneraction, "True musicians have an irrepressible urge and a need to share their strongest, most delicate, most spontaneous feelings." In his fourth release for Silkheart Records, Futterman still displays that irrepressible urge. However, over the last decade the urge has been transformed and channeled into a highly focused, disciplined school of through-composed, what the Germans once called durchkomponiert, improvisational music. Thought of in less analytical terms, Futterman is continuing to define the once sole purview of Coltrane - that musical tradition of playing extended sets without repeating oneself. Long misunderstood though, Trane's vision, and now Futterman's, is not about playing 'free' or playing 'out'. And it is not about predetermined notions of what jazz is, or was, or should be. It is about musicians composing in the moment, resolving one phrase with the next, and through the process of continuous resolution, arriving at a place not yet discovered.

Just as Joel Futterman's vision has evolved over the past decade, so too have his musical associations. This CD features his strongest co- leader since Jimmy Lyons, Edward 'Kidd' Jordan on tenor saxophone. In fact, one reviewer termed their association, the 'Twin Axis of Power'. These two musical soul mates are finally delivering Trane's long sought promise for his music: that sense of being, derived from the compositional clarity of musicians truly interacting musically in the moment. Like Futterman, 'Kidd' Jordan has labored most of his professional life in relative obscurity to all but the most avid jazz fans. Living and working from New Orleans for more than 40 years, he has developed a very personal musical conception based on a fundamental philosophy. As 'Kidd' describes it, "Jazz is an improvised music. It is in constant change." This philosophy is in large part why he and Futterman have found such a complementary resonance in their musical concept of continuous movement and resolution within the context of the jazz tradition.

From the European jazz tradition, this recording features two of its most prominent proponents, veteran Barry Guy on bass and Mats Gustafsson on tenor and baritone saxophones. Guy, whose London Jazz Composers Orchestra recently marked its 25th anniversary, clearly not only understands the vision of his co-leaders, but is able to articulate that understanding in an extended musical context. In doing so, he brings to this music a highly refined concept of pulse, as opposed to time, within the framework of a virtuoso technique. Mats Gustafsson, one of Sweden's foremost new music performers is the enfant terrible of the group. Mats is always pushing and reaching for that next level of sound. In this recording, his continuous pursuit of the unknown provides a selective counterpoint to the cool refined sound of 'Kidd' Jordan that keeps the music's tonality continuously moving forward .

Rounding out the quintet is Alvin Leroy Fielder, Jr., on drums and percussion. Alvin, like the co-leaders, is a remarkably under-documented drummer in the finest American jazz tradition. A scholar of the Amencan jazz drumming tradition, especially that of Ed Blackwell, and one of the onginal members of the Association for the Advancement of Creative Musicians (AACM), Alvin has finally found a musical resting place in the Futterman - Jordan home. In this recording's first and umcharacteristically (for Futterman) short selection, Hear With You, the listener is treated to the whimsical side of Futterman and 'Kidd' as they run the quintet through its paces. The close interplay the co-leaders exhibit in this opening miniature - trading phrases on and off the beat with one another as well as with the rest of the group only serves to set up the listener for what is yet to come.

Futterman and Jordan have been performing together for about a year and Soul Mates personifies the closeness they have developed during this period. The piece also reflects the development of their compositional philosophies which are based on taking the best of the American jazz tradition and pushing the tradition beyond the paradigms that have bound it up since the late sixties. What seemingly begins as a harmonically interesting extended performance with 'Kidd' stretching the upper registers of his horn and Joel virtually using every inch of the piano, slowly but inexorably resolves to a beautiful ballad in the finest jazz tradition. It is this concept of continuous resolution in Soul Mates that provides a picture window view of not only where these two musicians have been, but more importantly, where they are going. While there is no question that the echoes of Trane, Shepp, Ayler, and Coleman are present in Jordan's compositional conceptions, the operative word is 'echoes'. Although there are few such 'echoes' in Futterman's playing, due largely in part to his self imposed isolation for the past two decades, this duet is clearly spawned from the finest mainstream of the American jazz tradition.

By contrast, Meeting Place, a trio with Futterman, Guy, and Gustafsson is squarely in the mainstream of the modern European jazz tradition. This piece showcases the very physical 'in your face' style that has become a trademark of Mats' playing, but done so in a sophisticated compositional structure. The five-part structure serves to both focus the strength of Mats' reedwork technique while providing a context for its development. Each of this piece's five parts are bridged by a duet of Barry performing some very subtle arco work with Joel working inside the piano with the precision of a harpist. On either side of the bridges, Mats explores every possible sonorous nook and cranny of his instruments. Behind Mats, Barry and Joel maintain a continuous current of compositional development that ultimately resolves itself in a most unexpected manner. Meeting places can be public or private, planned or unplanned; this piece describes each.

Building on the musical conceptions displayed in their duet, Futterman and Jordan bring all the members of the quintet together in the centerpiece of this recording, Nickelsdorf Summit. In almost 45 minutes, divided among seven continuous parts each with its own distinct personality, this composition explores the extreme reaches of the best each musician has to offer - within a unified whole. In this piece, Futterman continuously shifts from inside to outside the piano, while using his curved soprano and Indian flute for coloring, in a continual search for the next resolution and phrase. All the while, Jordan continuously changes the moods, colors, and melodic constructs of the music. In doing so, they not only continuously trade phrases with one another, but keep the music moving in a direction that fully integrates each of the other three members.

Fournier opens with an extended drum solo by Alvin Fielder, one of the rare instances that the spotlight has moved his way. This piece is based on another composition, Four For Fournier, that Alvin wrote for his longtime friend, Vernel Fournier, while Vernel was recovering from a stroke. Always the consummate sideman and gentleman, Fielder seeks to blend his style of playing with the musicians around him. Or, as Alvin says, "Similar conception in thought." In doing so, he brings no preconceived conceptions about the music's rhythms to the studio. As very aptly shown in this piece, Alvin is content to let the music flow, only seeking to be its rhythmic channel. With this recording, Joel Futterman and 'Kidd' Jordan have crafted a quintet performance that represents the purity of the jazz tradition - a purity that harkens back to another time. In its purity though, this music also holds the promise of the future. So, this recording closes with the bookend of its opener, Going With You. Just as Hear With You sets up the listener for the rest of this recording, Going With You, sets up the listener for what is to come.