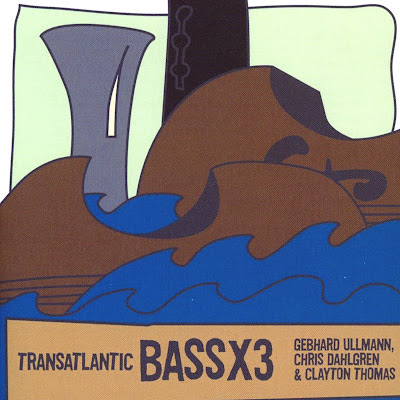 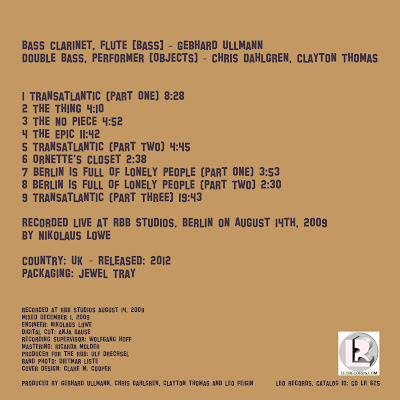 
For fans of low tonalities, BassX3′s new album Transatlantic is heaven. It ’ s the second one from multi-reedman Gebhard Ullmann (who plays bass clarinet and bass flute) with bassists Chris Dahlgren and Clayton Thomas. To call this the best jazz album of the year so far invites all kinds of arguments – after all, can a recording this opaque, rhythmically inchoate and impossibly esoteric be much more than a curio? Absolutely! Whether you consider this free jazz, ambient music or indie classical, it ’ s a rich, murky masterpiece. Its centerpiece is the title track, an epic, 33-minute three-part suite. The low drone of the two basses being bowed in tandem builds a chocolatey mist laced with overtones, with the occasional creak, thud or rattle, evoking the hum of the diesels and maybe a hammock swaying in a stateroom. You could call it the Titanic Theme – from the point of view of passengers in steerage, anyway. Ulllmann, as usual, doesn ’ t limit himself to any preconceived tonalities, offering a blithely whistling microtonal solo in the first segment as the bassists rattle the occasional random household item like ghosts flitting through the sonic frame. 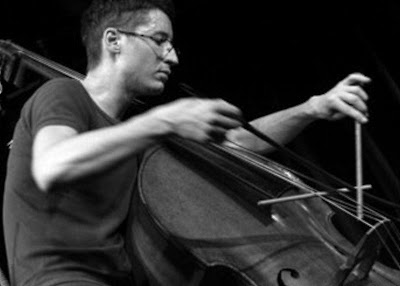 The other tracks here are just as enjoyable and much less static. The Thing features burbling, echoey twin basses with the bass clarinet wandering the moors, off to the side; then the basses back away, leaving Ullmann prowling contentedly, centerstage. The No Place has the bass flute looming pensive and minimalistic over jagged, distantly percussive bass chords and atonal accents and the occasional jarring pluck of a string: an Asian-tinged horror film score for before the point where the suspense reaches the level of a scream. The aptly titled Epic layers minutely wavering bass flute over a rather menacing backdrop of overtones and low washes; then the group all go spiraling around in what sounds like the bottom of a well before returning to a lusciously droning rumble that Ullmann uses as a long launching pad for some unexpectedly energetic low bass clarinet work. Ornette ’ s Closet contrasts brightly bouncing clarinet over echoey low-register playfulness; the diptych Berlin Is Full of Lonely People, a desolate, brooding tone poem, is the most melodically memorable track here.

Ullmann also has a considerably more lively if less intense release out with his Clarinet Trio, simply titled 4, featuring him playing bass clarinet alongside Jurgen Kupke on clarinet and Michael Thieke on alto clarinet. Fans of Ullmann ’ s back catalog will find this casually conversational session more in line with his previous free jazz work. The tracks include an artfully disassembled, brightly layered Balkan cocek dance; a wryly swaying, atonal blues; a tensely exploding tone poem that might have been a sketch for Transatlantic; a playfully martial study in low-register clusters; all sorts of friendly jousting, and an Ornette Coleman cover. Both albums are out now on Leo Records. 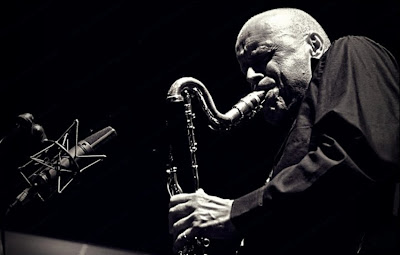 This Germany-based trio artfully expresses the lower register realm, framed on a program that enables the musicians to share equal ground and incorporate a concentrated focus, cloaking a major portion of the album. With growling basses, sinewy arco-passages and the use of objects to alter sounds and provide an ethereal framework, the musicians uncannily tender motifs that could sometimes allude to the use of background electronics. In a sense, the trio plays tricks with your psyche, abetted by darkly resonating notes and supple passages. They often intimate a sacred rite of passage amid several spikes and interconnecting movements, signaling understated buoyancy.

While playing the bass flute, Gebhard Ullmann amid the bassists' shrewd use of space and contrasting effects, conjure notions of a solemn vista, including delicate treatments and hallowing auras. On various pieces, the musicians radiate craggy tones, complemented by otherworldly extended notes and dense frameworks. Armed with a consortium of concepts, they touch upon minimalism and offset the undulating currents with lashing breakouts.

The piece titled "Berlin is Full of Lonely People (Part One)" is aggressive and inward- looking. They present striking disparities encapsulated by Ullmann's haunting flute phrasings and the bassists' angular statements. Here, they navigate through darkness as blithe settings coalesce with fleeting themes. And at various points throughout the set, they inject a coarse edge where Ullmann's bass clarinet work serves an instigator and prompts the slicing and dicing three-way interactions.

As it might be anticipated, the artists do not simply indulge in wanton cacophony or purposeless improvisation. Hence, it's a cohesive engagement that digs deep into the soul and proposes a surfeit of compelling persuasions. 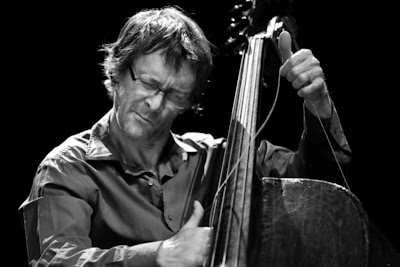 It used to be usually the pride of any musician (vocalist) to get the highest note possible on the instrument, clear and crisp. The idea of assembling together three low-register instruments might not be revolting today but nevertheless it's not something you meet too often. Which is but one of the reasons BASSX3 project should attract your attention.

BASSX3 is about unusual sound possibilities, and the album's titles gets it right - low bowed notes are not unlike the wailing of the transatlantic's siren, but in their creative adventure they manage to expand the sonic capabilities of own instruments with up to the area of high ear- piercing sounds of metallic overtones, bowed plates and plucked strings. Gebhard Ullmann, Chris Dahlgren and Clayton Thomas create together music that esquisitely original and uniqe in its sonorus vision and captivating in its surreal qualities. Rumbling vibratos, ritual and primal drones, noir suspens of deep tones, waling low-cries as if distorted through some space-time continuum filter, slowed down, maximalized, detailed, deceiptevely minimalistic on the outside, reach and colourfull below the surface. As "Transatlantic" part three which finishes the cd with the drone vibrations and clarinet growls, like boiling water in the pot with the top on, with all the heated vapour trying to escape) . This is music of incredible tension, of gripping, unwordly atmosphere, of almost infinite depth and reach. Majestic, pensieve, meditative and cerebral (as the title aptly suggest like "The Epic" or the three parts of "Transatlantic"; the qualities are reinforced when the gentler sound of the flute substitues for the darker tones of bass clarinet). Restrained, focused yet adventurous, with "Ornette's Closet" being the only change of pace as the musicians prove they can make the notes jump and run in the free bop vein.

An unique concept that gave unique results. Deeply intriguing and gratifying. Music for those who'd like to dive down deep into the depths of the ocean. Surreal voyage. Brilliant.