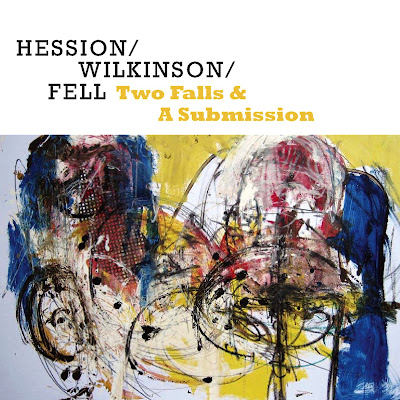 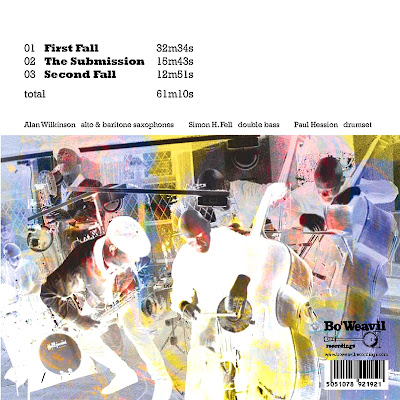 The trio of Alan Wilkinson on alto and baritone saxophones, Simon H. Fell on double bass, and Paul Hession on drums first came together to play improvised music in 1989, releasing their first album, Bogey ’ s (Bruce ’ s Fingers) in 1991. Two Falls & a Submission was recorded in Monmouth, Wales, in March 2010 during their reunion tour of the UK to mark their 21st anniversary.

They need not have worried. Right from the first notes of the opener, “ First Fall, ” the years fall away as all three simultaneously hit top gear in a bravura display of high-energy improvisation. Wilkinson immediately grabs the limelight, straight away playing with a raw intensity that other saxophonists might hit once a night; for Wilkinson, that is the baseline from which he then builds. Alternating between saxophones, he solos relentlessly, keeping a seamless barrage of phrases flowing from his horns. When he does intermittently pause from blowing, he is likely to pour forth improvised, wordless vocals with as much gusto as he plays.

It seems entirely appropriate that Two Falls & a Submission takes its title from the parlance of all-in wrestling. Hession and Fell never act as support players. Throughout, the drummer matches Wilkinson ’ s intensity, never letting the pace flag so as to keep the pressure up. At times it sounds as if he and Wilkinson are involved in a one-on-one duel to see who will crack first; of course, neither of them does. For his part, Fell stokes the fire with his own propulsive phrases, constantly driving things forward and holding them together. The end result is an amalgam of three equal contributions that fit together perfectly; the absence of any one of them would make the whole feel incomplete.

Even when the three move down a gear — as they sometimes must, given the relentless pace they set — they still retain all the qualities that make this trio special: intensity, togetherness, equality. Awesome stuff. 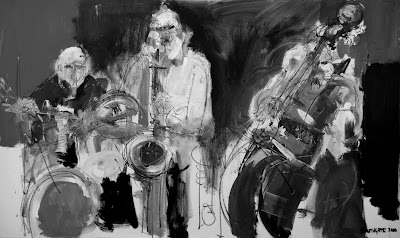 Excerpt from:
Ian Mann on the music of the extraordinary improvising saxophonist Alan Wilkinson

..." I’ll admit that I don’t always find improv the easiest of genres to get on with, I like the idea of it but don’t always find it easy to listen to, particularly on record. However it is thrilling to watch the process live, the thinking in the moment, the visual impact of extended instrumental techniques, the things that can’t always be appreciated on radio broadcasts or on album. Wilkinson initially requested that I cover “ Practice ” , an album of solo saxophone improvisations but I suggested that as a relative novice to the genre I might get along rather better with this. Good move. It’s satisfying to find an improv record I can really identify with, partly the result of having witnessed the members of the trio live (particularly the extraordinary Wilkinson, I’ve never heard another saxophone player quite like him) and partly the resonance that comes from the recording being located at the Queens Head.
Another analogy often used to describe the improv process is “ painting pictures in sound ” and there’s a certain irony in the fact that Wilkinson trained as a painter completing a Fine Arts degree at Leeds University before turning to music. Art’s loss was surely music’s gain.
Recommended, but not for the faint-hearted."