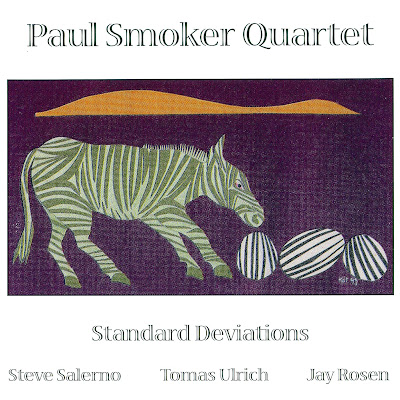 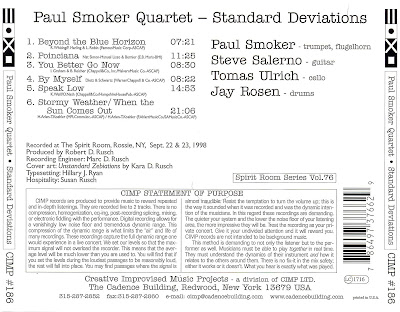 Productions and concepts, like improvised music, evolve, when allowed to, in a natural and usually beneficial way. The original idea for this set grew out of CIMPhonia #1 (CIMP 173 & 178), an arranged gathering (May 1998) for impromptu music which brought together Peter Kowald, Dominic Duval, Mark Whitecage, Joe McPhee, David Prentice, Paul Smoker and Jay Rosen. It was a lovely time of expressive sharing and out of it came the idea between Jay and Paul to do a duo project and out of that evolved the concept of a trumpet, guitar, cello and drum quartet interpreting material out of the Great American Songbook.

The group arrived in a caravan of cars on Tuesday, September 22, having played a gig at Rochester ’ s (NY) Bop Shop the night before. Relaxed informality set the tone as Tomas, Jay, and Paul are familiar faces at the CIMP premises. Steve Salerno (1961, New York) was the new face but, being a former student of Paul ’ s, from back in his Iowa days, and having worked with Jay on and off since the mid-80s, he too seemed very comfortable and proved to be both hip and appropriate in his utilization of the guitar.

Supper was followed by an unusually lengthy sound check and by the time the concert formally began, it was after 10 p.m. I will admit to some anxiety since, for me, sound checks are a period of hurry up and wait and by 10 p.m. the fellowship and anticipation I had felt in the earlier hours had lost its edge and been replaced by a growing fatigue. Fortunately, the quartet, having been more directly and continually involved with the sound set-up, had not lost its edge. They opened with “ By Myself, ” followed it up with “ Stormy Weather/When the Sun Comes Up ” and, after that incredible performance, took a break. By then my spirits were soaring, the adrenaline of artistry had reinvigorated me. 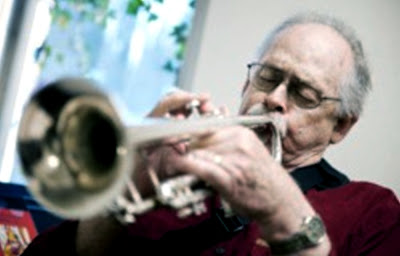 It occurred to me that individually, and even more so as a sum of their individual talents, these guys make musical artistry look commonplace. Yet, seasoned listeners will know there is nothing typical, or same old same old, about this concert. It ’ s not that they do no wrong, it ’ s more a measure of how right they are in their use of talents, imagination and the integration of it all into a musical whole. Here is a standard of artistry too rarely reached or demanded.

This is huge music and these are monumental players and that ’ s really the bottom line. There are classic interpretations of classic music here and charting it all may take years of listening: oh, the joy and exultation of it. This is humankind at its best – partake.