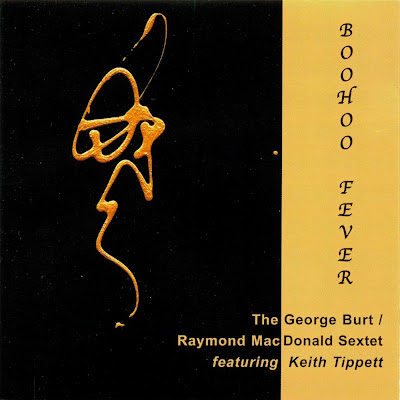 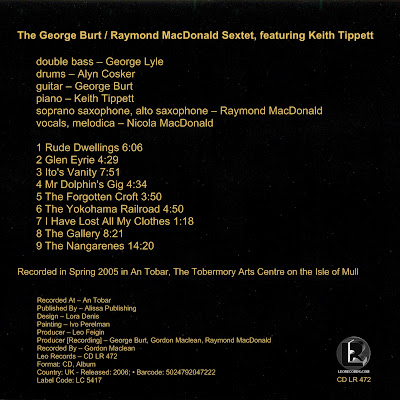 Not many albums begin their journey towards completion by celebrating a town clock. Keith Tippett is the Sextet’s featured guest for this recording, having made his lengthy and winding way northwards to the Isle of Mull, where stands the town of Tobermory’s ticking time-piece. Booklet scribe Brian Morton will fill you in on the convoluted conceptual background to these pieces, but only after making a purchase of this disc. It’s good reading, but is certainly not needed to appreciate the music’s ever-shifting abstractions.

The opening “Rude Dwellings” is afire, and this flare-up will not diminish during the album’s entire progress. The band are vigorous and tensed, tightly contracted for maximum impact, feverishly burning to play. Tippett’s rolling runs wend their prepared-key way, barrelling through Alyn Cosker’s crashing drum strafes. George Lyle’s upright bass is so forcefully struck that it has the hardness of and electric axe. “Glen Eyric” goes for building suspense, as-droves of bruised tunes flee hither and thither, amidst a groaning and grinding suspension of tension. There’s a shift of tone again, as “Ito’s Vanity” has Burt playing like Derek Bailey, fresh out of his dance band days, with melodica chills courtesy of Nicola MacDonald. The space is open, as Raymond MacDonald sends out flurries of burred lowness. He remains at the forefront for “Mr. Dolphin’s Gig , his jabbering issuances not pausing for breath.

This sextet knows all about variety. They’re not averse to a premeditated tune, either. “The Forgotten Croft” is a crabbily melodic roll, and then a few numbers later Nicola MacDonald turns in a vocal float, lending further planned structure. These are radically differing soundscapes, all delivered with great emotional intensity and a strong sense of the importance of the moment. Risks have been taken, and the Sextet plunge and rise between Hades and Heaven, grinning madly all the time. 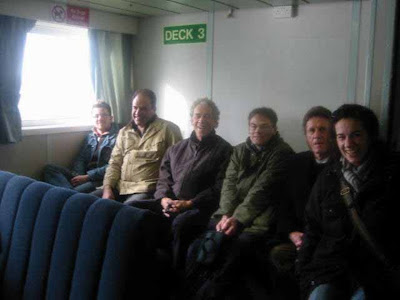 George Burt and Raymond MacDonald are the leaders of the Burt MacDonald Quartet. The band is a jazz-based outlet for their compostions, their songwriting, their arrangements, and their guests.

George and Raymond first came across each other in the Bill Wells component of a Brian Wilson tribute gig. The tune was “ Wind Chimes ” , and in the mind of Bill this meant a dozen musicians distributed all over the club playing tiny fragments of the tune while Raymond did one of his mad solos over the top.Raymond used to come along to George ’ s free improvisation workshops, and they got the idea to form a duo to play standards with some of the freedom of the free stuff. They never got there, and years later Derek Bailey showed them how to do it with his “ Ballads ” album, but it was fun doing it, and we also gigged as a trio with the fantastic Sophie Bancroft.

The late Lindsay Cooper had a wonderful band at that time with Allan Pendreigh on drums, Robert Henderson on trumpet and John Burgess on tenor. They used to do their gigs with “ guests ” . It was a tabla player one time and George as narrator of Lindsay ’ s long poem “ A Madman ’ s Guide to Music ” another. Tempers could get a bit frayed in that band at times… We were getting a bit tired of the duo/trio format, and we got Lindsay and Allan as our rhythm section and started playing pub gigs. A lot of these were in the west on Sunday lunchtimes, and Lindsay was an Edinburgh musician. This was when George Lyle joined us, and it stayed like that for nearly six years until Allan retired in 2004. Sophie ’ s own career was revitalised by two excellent records, and Nicola MacDonald eventually joined us. She ’ s a songwriter and record producer, and has some of Sophie ’ s lightness of touch as well as a pop musician ’ s concern with melody. We made a record called Oh Hello at about this time made up of songs and tunes we ’ d written for the pub gigs as well as the occasional hang-over from our previous bands. A similar batch of stuff made up Big Brothers. We financed these by saving up money from the pub gigs. We strongly recommend this process to young musicians … and old musicians too.

In between times we got the opportunity to travel and take our music further a field. (Eg Texas, Shetland and Oxford). These trips, along with the first two CDs, were real milestones in the band's early development and were came out of each of these projects with new ideas and plans.
George met Lol Coxhill at a duo gig with Pat Thomas as part of the Glasgow Jazz Festival gig, later released on CD as One Night in Glasgow. He took the cds and tapes we offered, and said “If I like them I’ll give you a call, and if I don’t you’ll never hear from me again”. 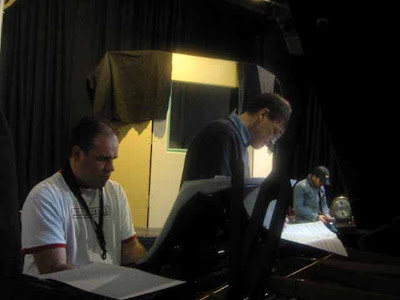 He returned to Glasgow the following year for a couple of gigs, and we recorded Tsunami in an afternoon. We repeated the process with Coxhill Street the next year, and Popcorn the year after that. These are basically records of free improvisation, although Aileen Campbell ’ s popcorn machine imposes a structure on some pieces. The goal of combining the two approaches is still there, though and we had another go using studio technology on Hotel Dilettante, which was recorded a couple of years ago and released by the Textile label in 2005. This gave us a chance to play at the famous Les Instants Chavires club near Paris where Lol recorded his immortal version of “ Falling in Love Again ” for Winter & Winter. Working with Lol has had a huge positive impact on the band in so many ways.

While all this was going on we got involved with whole lot of other people in setting up and running of the Glasgow Improvisers ’ Orchestra. But that ’ s another story.In 2005 we not only got to work with Harry Becket but we spent a week on the Isle of Mull at the wonderful An Tobar (say “ unTOE-pur ” ) Arts Centre recording a new set of songs with Keith Tippett. We had played with Keith at the CCA in Glasgow late in 2004 which was very well received so we were really keen to work with him again. This CD was released on An Tobar ’ s own label, TOB Records, and is called A Day for a Reason. And that ’ s you up to date. There will be more….