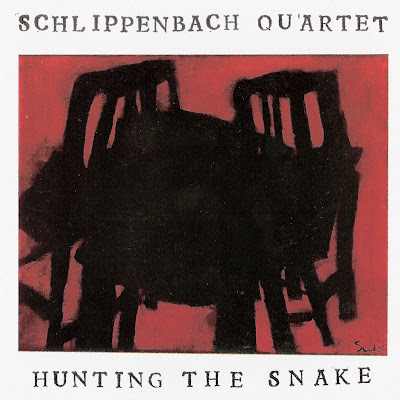 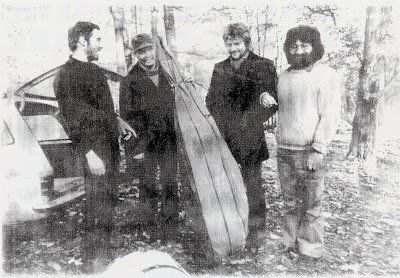 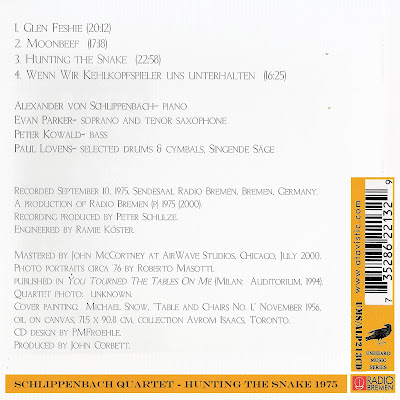 The material on Hunting the Snake -- four lengthy improvisations, each in the 20-minute range -- comes from a live 1975 radio performance but was not released until 2000. It features all three members of the long-running Schlippenbach Trio (pianist Alexander von Schlippenbach, saxophonist Evan Parker, and percussionist Paul Lovens) along with Peter Kowald on bass. The music here is dense, kinetic, atonal, and often harsh, but while not easy listening, this album is not entirely remote or inaccessible, either. The group's playing is very physical and energetic, and though it is recognizably distinct from most American free jazz, the jazz roots are, at this point, still readily discernible. The real interest comes in listening to the quartet's interplay, which is less refined than on some of the Schlippenbach Trio's later work, but which has a certain ragged cohesiveness and charm of its own. Parker's scraping saxophone, Lovens' junk-pile percussion, Kowald's feverish bowing, and Schlippenbach's atonal piano clusters contribute equally to the music's flow -- there isn't a real separation of "lead" vs. "rhythm" instruments during most of the album. Occasionally, however, Parker steps out on his own and lets loose with an extended high-pitched squall, as he does on the standout title track; these abrasive solo moments are especially interesting (or hard to listen to, depending on your take). Its near-80-minute running time is exhausting, but Hunting the Snake is worth tackling in more manageable doses, as it continues to sound daring and alive more than 25 years after its creation. AMG. 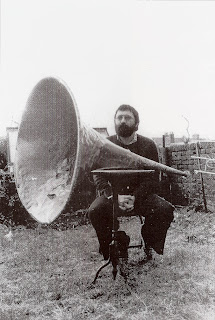 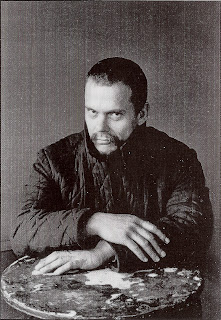 The Schlippenbach Trio remains one of the most redoubtable ensembles in creative improvised music due in no small measure to the sum of its formidable parts. Schlippenbach, Parker and Lovens need no introduction to those the least bit familiar with free jazz. The seemingly unsurpassable stature of their union was forged over the course of sporadic meetings and recordings and though the group has been in existence for decades only a handful of albums are represented in its discography. Several occasions over the years have
afforded a chance for a fourth to join the fold most commonly either Alan Silva or Peter Kowald on bass. This treasure trove date unearthed through the efforts of producer John Corbett recounts one such meeting early in the trio ’ s existence with German bass impresario Kowald joining the triumvirate for a session recorded by Radio Bremen.

The music contained herein stretches the running time of the disc to its limits threatening to spill over the eighty-minute mark. Four long pieces make up the program and each one is loaded to the gills with furious and furibund interplay. On the opening “ Glen Feshie ” Schilippenbach ’ s lyrical chords flank Kowald ’ s keening arco streaks. Lovens overruns his kit with raucous clatter and chatter, though an underlying fragmentary pulse pervades even his most verbose stick work. After an initial extended shriek Parker drops out leaving the group convulsing heatedly in trio formation. Kowald saws off splintered harmonic shards in a solo interlude before Lovens and Schlippenbach, worrying his piano innards zither-style, rejoin him. Parker ’ s soprano descends soon after in a whinnying swirl of multiphonics before ascending heavenward in a harmonic arc trailed by bowed bass and cymbals. 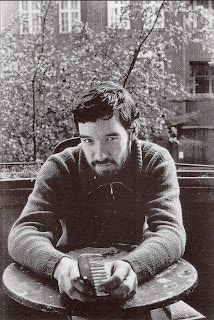 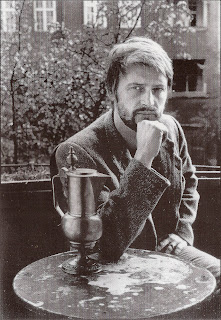 Lovens opens “ Moonbeef ” with a cyclic metallic cranking over which Parker ’ s suspiring tenor takes hold. Kowald and Schlippenbach annex much of the remainder of space with elastic tears and chiming clusters. Racing across the keys on the title track Schlippenbach vertical wall of self-immolating clusters. Further on in the piece Parker ’ s serrated soprano sustains create an eerie counterpoint to the pianist ’ s more lyrical musings. Kowald ’ s worried bow dogs his strings creating an almost continuous spray of charged particle harmonics. Parker ’ s solo statement that dominates the second half of the track delivers a deliciously drawn out sample of his long-lauded circular breathing style. Whistling wind chimes and the songs of humpback whales are just some of the auditory images conjured by his extended techniques. So much is packed into each piece that despite the disc ’ s lengthy duration, temporal density dissipates swiftly. The rarity of this recording alone is enough to announce its value. Couple this with the wealth of improvisatory energy channeled consistently through the music and the disc is made indispensable.