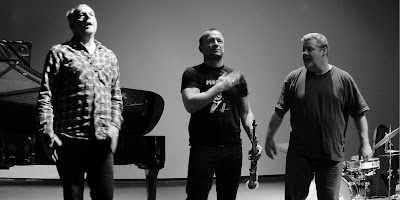 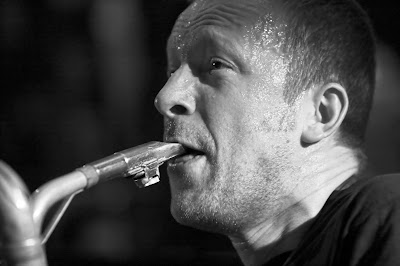 After more than seventeen years together, the members of the Swedish-based Gush trio now operate as three interlocking parts of one perpetual motion machine. Occupied enough with other projects, the three players—reedist Mats Gustafsson, pianist Sten Sandell and drummer Raymond Strid—bring a complementary desire for melded invention when they unite, as they did in Norrköping in 2003, for this, the band's first-ever domestic release in North America.

Fully in command of all elements of its instruments, the trio elaborates its thoughts over the course of three long selections of about 19, 13, and 26 minutes each. The best known of the three musicians is now Gustafsson, who plays soprano, tenor and baritone saxophones and fluteophone, alto fluteophone and French flageolet here. A veteran of large groups led by Peter Brötzmann and Barry Guy, as well as smaller bands with Joe McPhee and Ken Vandermark, Gustafsson is as easily at home in the United States as Europe.

Inventive timekeeper Raymond Strid also works in Guy's large groups, as well as smaller bands. Sandell, not only improvises with Scandinavian players like Fredrik Ljungkvist, but as a graduate of Stockholm's Academy of Music nurtures a fascination for electro-acoustic and contemporary so-called serious music. You can hear this most clearly during the 26 minutes of "Rhomb," as his voicing and touch vibrates from low to high frequencies and all stations in-between.

Affecting the outlines of a fantasia that notwithstanding its freedom mingles comfortably with the others' output, he's the master of low-key—literally—variations, whereas the remaining two use volume to pump up their solos. Starting with strummed piano chords, Sandell sensitively works his way from light plinks, to near toy-piano timbres, than finally to gentling harmonies that pull together Gustafsson's and Strid's strident outbursts. Meanwhile the saxophonist uses flattement, tongue-stopping, snorts and vocalized yelps to make his point— finally escalating to glossolalia.

Midway in vociferousness between the others, the drummer sticks to rim shots and wood- block ratcheting to make his points. Both other tunes function with similar strategy modifications. Gustafsson may unpack his fluteophones for unvarying intense single tones, yet he doesn't miss a chance to alternate near-silences with cat-like screams, bubbling split tones or rolling tongue stops. Sandell introduces lower-case arpeggios, highly syncopated right-handed actions or contrasting dynamics, as one set of fingers creates tremolo patterns and the other a contrapuntal line. Meanwhile Strid shakes his drum tree, fondles his smaller drum tops suggestively or batters them with full force as the occasion demands.

Familiarity has made Gush the perfect three-headed improv machine over the past few years, and Norrköping gives North Americans a chance to catch up with the rest of the free music world.