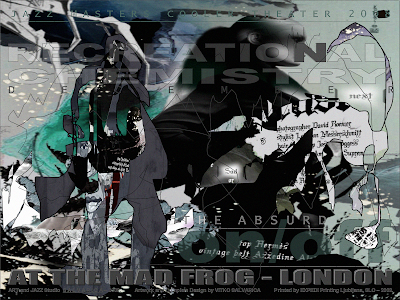 
The idea of the absurd is a common theme in many existentialist works, particularly in Albert Camus. Absurdity is the notion of contrast between two things. As Camus explains it in The Myth of Sisyphus:

The absurd is born out of this confrontation between the human need and the unreasonable silence of the world.

It's easy to highlight the absurdity of the human quest for purpose. It's common to assume that everything must have a purpose, a higher reason for existence. However, if one thing has a higher purpose, what is the reason for that purpose? Each new height must then be validated by a higher one.

Well, although the purpose of life may not be apparent, that does not confirm that it does not exist.

So, enjoy it in every new day, my good friends.

THE THEATRE OF THE ABSURD

'The Theatre of the Absurd' is a term coined by the critic Martin Esslin for the work of a number of playwrights, mostly written in the 1950s and 1960s. The term is derived from an essay by the French philosopher Albert Camus. In his 'Myth of Sisyphus', written in 1942, he first defined the human situation as basically meaningless and absurd. The 'absurd' plays by Samuel Beckett, Arthur Adamov, Eugene Ionesco, Jean Genet, Harold Pinter and others all share the view that man is inhabiting a universe with which he is out of key. Its meaning is indecipherable and his place within it is without purpose. He is bewildered, troubled and obscurely threatened.

The Absurd Theatre is a theatre of situation, as against the more conventional theatre of sequential events. It presents a pattern of poetic images. In doing this, it uses visual elements, movement, light. Unlike conventional theatre, where language rules supreme, in the Absurd Theatre language is only one of many components of its multidimensional poetic imagery... ... It owes a debt to European pre-war surrealism: its literary influences include the work of Franz Kafka. The Theatre of the Absurd is aiming to create a ritual-like, mythological, archetypal, allegorical vision, closely related to the world of dreams...