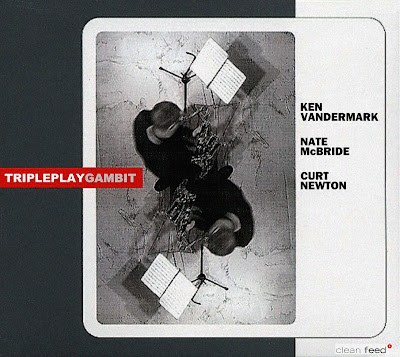 Description:
The second Tripleplay outing -- Ken Vandermark, Curt Newton, and Nate McBride -- is worlds away from the trio's initial offering, 1998's Expansion Slang on the Boxholder label. While that recording offered proof that the ensemble could play together, this one shows in spades how well they create together. There are eight tunes here, half composed by Vandermark, and half by McBride; all were written specifically for this band. Themes are what drive this band, with clearly stated heads extrapolated upon by modal uses of harmonic and chromatic tonal explorations. The tunes range from the wonderfully perverse post-bop angular melodicism of Vandermark's "Two (For Joe Morris)," clocking in at just over four minutes, to the nine-minute-plus study in tension and dynamics that is "Bird, Field (gray)," by McBride. There are surprises at every turn, and while this is certainly an "out" date, it is nonetheless compelling -- not as a blowing session, but as a compelling and satisfying series of ensemble constructions.
_ By Thom Jurek

Tripleplay is, as the name implies, a trio. Chicagoan Ken Vandermark and Bostonians Curt Newton and Nate McBride coalesced once before for Expansion Slang (Boxholder, 2000), and Gambit marks their outspoken return; it's a document of explicit and articulate musical prose. Not for the weak of heart, as is evident in several places, but more restrained and methodical than you might expect.

I have to admit that I came to the music somewhat biased, never having heard a bad Vandermark record, but be that as it may, this one is up to his usual high standards. The reed player shares half of the composition credits on these eight tracks with bassist Nate McBride, but the overall shared articulation overshadows the differences between the two. At times the trio waxes lyrical, as on the sweet ballad "Tilted," where understatement from all players carries the day; or the forward-moving "Framinghammer," where simplicity is the mode and a romantic tone predominates. McBride sometimes riffs away, which reflects both his personal style and the structured emphasis of some of these pieces. The aforementioned "Framinghammer" rides on a loping bass line (complemented by drum counterpoint), and "Bird, Field (gray)" draws strength from rhythmic leads that originate in the bass.

Three of these pieces offer more dissonance than the rest. They include "Two" (dedicated to Joe Morris), which not surprisingly passes through many small intervals, bubbling and popping across bits and pieces of sound. It's not the kind of extroverted overblown expressionism that Vandermark is clearly capable of, and which he does engage in elsewhere on the record. But the most satisfying moments on Gambit occur when the trio parks its articulate, almost intellectual approach in an area that's more rough around the edges. It's that give and take which provides the tension and release here.

It's fun to hear Vandermark, McBride, and Newton swing in unexpected contexts (some times more obviously than most, and aided immensely by Newton's range), and they demonstrate a clear respect for the tradition, both inside and out. It all comes down to how many tools they have at their disposal, which as you might guess is quite a few.