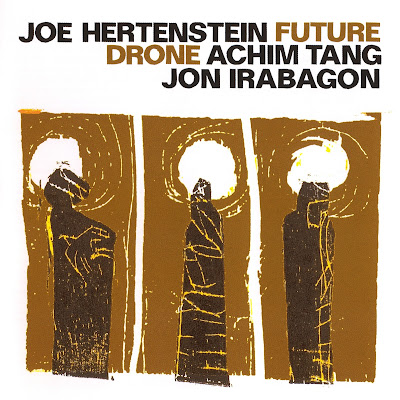 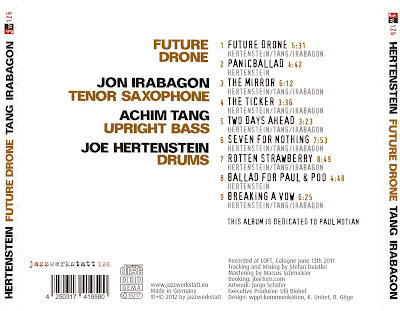 Note:
Future Drone is a raw and brisk trio album with Jon Irabagon on tenor saxophone, Achim Tang on bass and Joe Hertenstein on drums. Dedicated to the late drummer Paul Motian, the music is spirited, beginning with “ Future Drone ” which has an exciting angular improvisation. Jon Irabagon develops a very deep and full saxophone tone and Tang and Hertenstein are continually inventive and propulsive. Raw saxophone and thick bass usher in “ Seven for Nothing ” with the music developing a thrilling caustic tone moving to bowed bass and powerful drums. Everything is free of pretense and consists of in the moment mindful creativity. “ Rotten Strawberry ” is the highlight of the album with rough hewn saxophone, bass and drums advancing a stumbling funky groove. Irabagon is particularly powerful here, deep and darkly potent over the open ended bass and drums allowing for for three way conversation with subtle humor and a wildly thrilling collective collective improvisation. The music on this album blends the talent of three unique musicians in dramatic fashion, showcasing their captivating and climactic music.
_ by Tim Niland 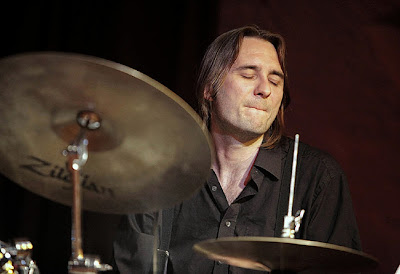 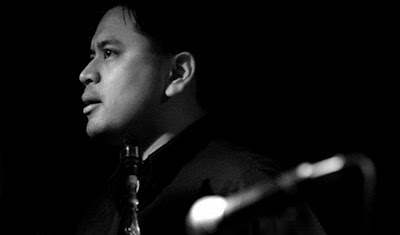 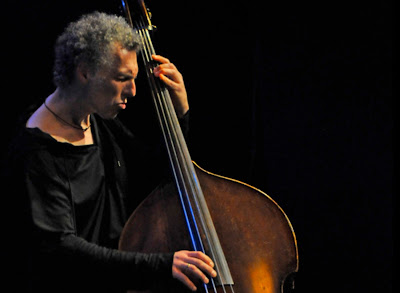 Featuring Jon Irabagon on tenor sax, Achim Tang on upright bass and Joe Hertenstein on drums. This disc was recorded at the Loft in Cologne, Germany and it is dedicated to Paul Motian. Since moving to New York, Joe Hertenstein has been working with a handful of other transplated musicians like Thomas Heberer and Joachim Badenhorst. Hats off to saxist Jon Irabagon who plays with Mostly Other People Do the Killing, Mary Halvorson Quintet, the RIDD Quartet! He won the prestigious Monk award a couple
of years back and has recorded several of his own discs. I recognize Achim Tang from his work with Max Nagl, Dave Tronzo and Guy Klucevsek.
This is a mostly improvised date with a couple of songs written by Mr. Hertenstein. The sprawling, intense and crafty drums of Joe Hertenstein are at the center of these pieces. Joe whips up a cascade of whirlwind drums while Mr. Irabagon screeches massive tenor blasts and Mr. Tang bows with centrifugal force. "Panicballad" is an appropriate name for a piece in which the sax plays slowly while the bass and drums speed up, going in two directions at once yet remaining together. Although Hertenstein organized this session, all three members get a chance to stretch out, listen and interact on several levels. Each member also kicks off or leads the direction of several different pieces. It is interesting to hear Mr. Irabagon playing those bent, extended technique tenor sax sounds rather than blowing long and hard like he does for the entire trio session with Barry Altschul on the 'Doxy' CD released last year (2011) or his playing with MOPDTK. This is a most formidable, tight and spirited trio. They even do some sort of bent blues thing on "Rotten Strawberry" and that fits as well. 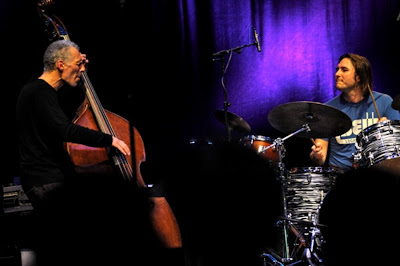 Excerpt:
...What you get is still entirely different from what you can expect. The music is intimate, raw, fresh, creative, with a range that goes from cautious explorations - of which some are truly magnificent - over some hard intensity to the soulful moments of "Ballad For Paul and Poo", yet all tracks form one very coherent and varied whole.
The intimacy is equalled by the intensity of the playing, which has a sense of supressed urgency, or controlled expressivity, which never actually explodes but remains full of expectations and held-back anticipation. The result is incredibly crisp and emotional. It hurts and it comforts.
Three incredible players, technically masterful, musically inventive and with deep emotional powers.
_ by Stef (FreeJazz)