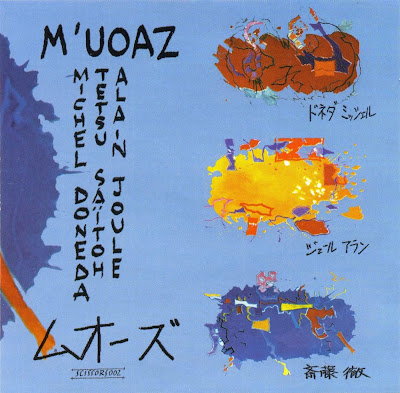 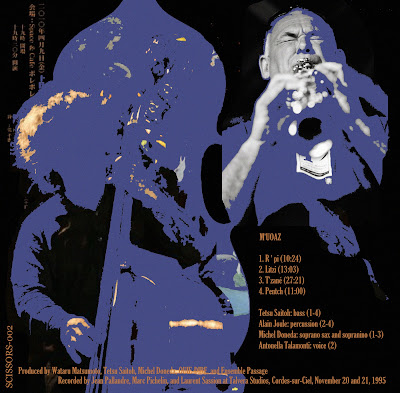 Japanese bassist Tetsu Saitoh stands out as a new hope from across the ocean. He's the new ray in the sea of bodies that play the same standard fare. These two recordings, released on his own Scissors label, outline the here and now in his present body of work. On "M'uoaz", Tetsu is surrounded by an all-star cast, which includes saxophonist Michel Doneda and percussionist Alain Joule. [Vocalist Antonella Talamonti joins the trio on one track.] The music is rather sparse. Joule implicates the use of his brushes against the cymbals. More often than not, we witness gorgeous duo passages between percussionist Alain Joule and Michel Doneda on the soprano. In fact, Michel Doneda provides some of the ferocious moments on this record. Whether blowing on his soprano or his sopranino, his technique is recognizable articulate blowing that doesn't overpower the rest of the trio, but enhances its colours. Finally, Tetsu Saitoh provides a number of rather solid solos both plucking and bowing on his double bass. These moments are especially enhanced when Michel Doneda takes leave for extended periods of time, which is most apparent during the longer tracks. It is then that we get to hear the dueling between Saitoh's both tender and powerful bass playing and Joule's delicate brush strokes. Overall, "M'uoaz" is a record any serious fan of collective improvisation should seek out.